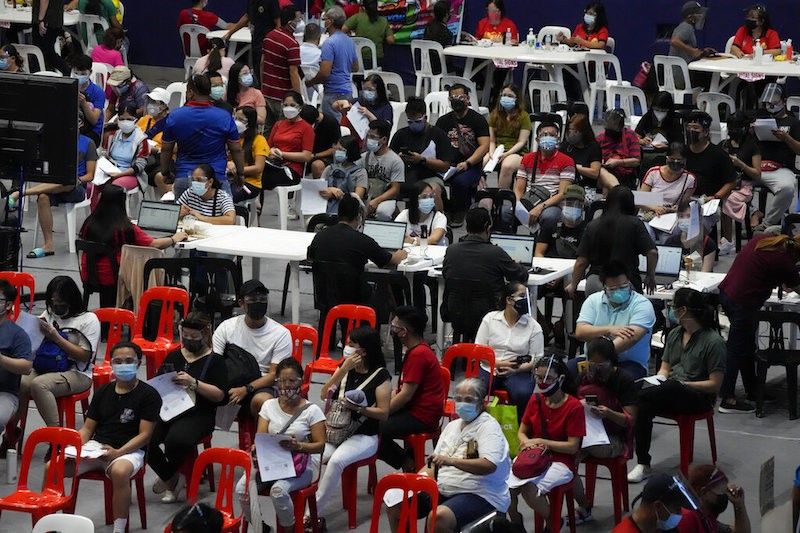 MANILA. Residents wait for their turn at a sporting arena converted into a temporary COVID-19 vaccination center in San Juan City on Thursday, June 17, 2021. (AP)

In its case bulletin Friday, the number of active cases went up to 61,776, the highest since the 63,376 on May 8, 2021. The number includes 30 cases that were previously tagged as recoveries.

The 6,833 new cases raised the total Covid-19 case count in the Philippines to 1,346,276. Fourteen duplicates, including 10 recoveries and one death, were removed from the tally.

The DOH case bulletin also listed 110 additional mortalities, including 60 cases that were previously tagged as recoveries but were found to have died from the disease.

These brought the Covid-19 death toll in the Philippines to 23,385. The case fatality rate remained at 1.74 percent.

The daily positivity rate sent up to 12.6 percent on June 16, with testing output declining slightly to 43,635 from the previous day.

Five laboratories were not able to submit their data to the Covid-19 Document Repository System (CDRS) on June 16.

The active cases account for 4.6 percent of the total case count.

A report by independent research group Octa Research noted that Davao City, hometown of President Rodrigo Duterte, reported its highest number of cases in a day at 482 on June 17.

DOH Undersecretary Maria Rosario Vergeire said the situation in Davao City is still far from being under control.

"There has been no declaration that we are already able to control the cases in Davao City. Compared to previous months, the cases there really surged," she said.

She said DOH has continued to closely monitor and provide the necessary assistance to the local government unit to prevent the healthcare system from being overwhelmed.

"We are also facilitating their network of hospitals there so that we can decongest the hospitals in the area," said Vergeire. (HDT / SunStar Philippines)