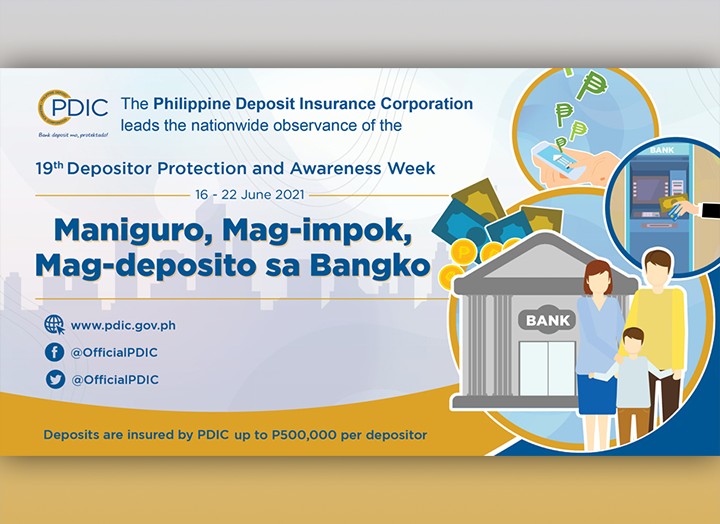 ACCORDING to the 2019 Bangko Sentral ng Pilipinas Financial Inclusion Survey, five out of 10 adult Filipinos save. Of this number, only one out of the five actually saves in banks. For those who have accounts in formal financial institutions such as banks, e-money issuers and microfinance institutions, their accounts were mostly used for sending and receiving remittances or making wireless payments.

In observance of the 19th “Depositor Protection and Awareness Week (DPAW),” the Philippine Deposit Insurance Corporation (PDIC) urges the Filipino public to put their savings in a bank account. This year’s theme is “Maniguro, Mag-impok, Mag-deposito sa Bangko,” which supports the strengthening of the country’s banking system through enhanced depositor confidence, and complements the government’s thrust of driving economic recovery through savings mobilization.

Established in 1963, the PDIC is a government instrumentality created to promote and safeguard the interests of the depositing public by way of providing insurance coverage of up to P500,000 per depositor per bank in case of a bank closure. As an integral part of a financial safety net, deposit insurance contributes to the stability of the Philippine financial system. Aside from the culmination of this year’s DPAW, PDIC also celebrates its 58th anniversary on June 22.

Based on the same aforementioned survey, these are the top reasons why Filipinos do not put their savings in banks: not having enough money, not needing a savings account and not having the documentary requirements such as a government-issued ID needed to open an account.

To address these concerns, the third one specifically, many banks now offer Basic Deposit Accounts (BDA). A BDA can be opened with a minimum initial deposit of P100 and one valid ID or barangay certificate. It has no maintaining balance and interest rate, has a maximum account balance of P50,000 and can also be used for cashless transactions. Interested individuals may ask banks if they offer BDA.

On top of PDIC’s insurance coverage, opening a bank account provides many advantages and conveniences such as the ability to make online transactions like paying bills and purchases. With mobile apps and online banking, depositors can access their accounts through a computer or smartphone. Cash is also readily available and can be withdrawn via an automated teller machine.

As DPAW comes to a close, PDIC hopes to see more Filipinos opening and maintaining bank accounts moving forward. During such difficult and unpredictable times, financial security is imperative now more than ever. For more information about PDIC and its initiatives, one can visit PDIC’s official website at www.pdic.gov.ph and its Facebook page at https://www.facebook.com/OfficialPDIC. SPONSORED CONTENT