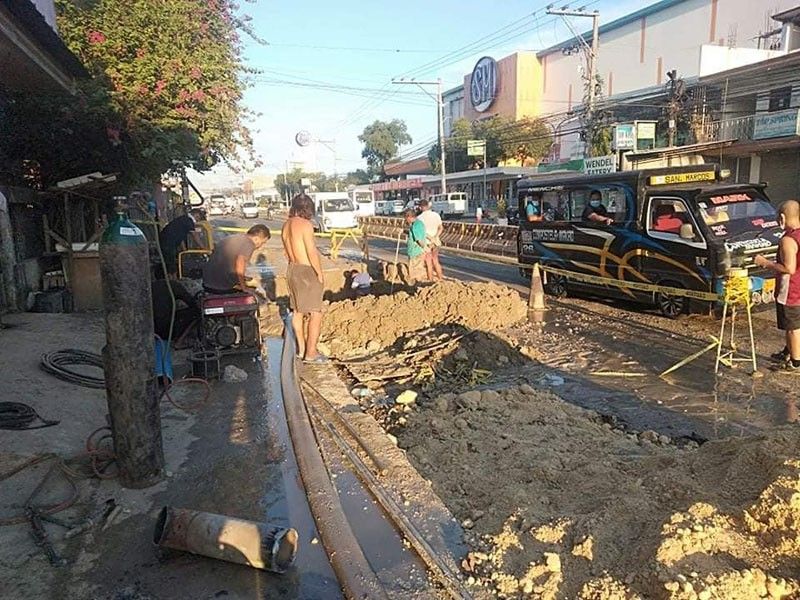 HEAVY traffic at the Cebu North Road from Mandaue City to Consolacion over the past few weeks was blamed on an ongoing excavation of a pipeline conducted by the Metropolitan Cebu Water District (MCWD).

Following what had happened, MCWD officials issued an apology to the public and immediately ordered their personnel to speed up their work.

The excavation was already covered at 7 p.m. on Thursday, June 17, 2021, and the two lanes were passable at 8 o’clock that night.

Edwin Jumao-as, executive director of the Traffic Enforcement Agency of Mandaue (Team), said the slow flow of vehicles between Consolacion and Mandaue City started on June 10, 2021.

Jumao-as said traffic has slowed down in the area it usually starts to build up at 5 p.m. Traffic only eases at 8 p.m.

Jumao-as said the traffic on June 17 was the worst as MCWD had yet to conclude work in one of their pipelines.

He said vehicles heading to Northern Cebu started to slow down at 3 p.m. and the traffic was at its peak from 5 p.m. to 9 p.m.

Traffic buildup began at the SM Consolacion and ended at M.C. Briones St. near Pacific Mall in Mandaue City.

Mandaue City Councilor Jimmy Lumapas, the chairman of the City Council’s transportation committee, said that the traffic has also reached the access road of Barangay Canduman.

As the national highway was congested at that time, Canduman’s access road experienced heavy traffic from corner H. Abellana St. to Barangay Talamban in Cebu City.

In a separate interview, Consolacion Mayor Joannes Alegado told SunStar Cebu that they asked MCWD to speed up their work on repairing the leaking pipes in the area that also stopped the water supply in their town.

Alegado said his municipal engineers and the Consolacion Traffic Enforcement Team were also in the area to monitor the excavation work.

Edna Inocando, MCWD’s public information officer, said repairing the pipelines is necessary to provide safe and clean water to their customers in Consolacion.

Inocando said their personnel detected three leaked pipelines under the excavated road and they had to be addressed immediately since they are mainline pipes.

She also couldn’t discount the possibility that the leaked pipes could be contaminated.

Two leaked pipes were immediately repaired but the third pipe was not found since it is located deeper than the other two.

Inocando said they didn’t place a steel plate to cover their excavation as the soil in the area was too soft. / KFD