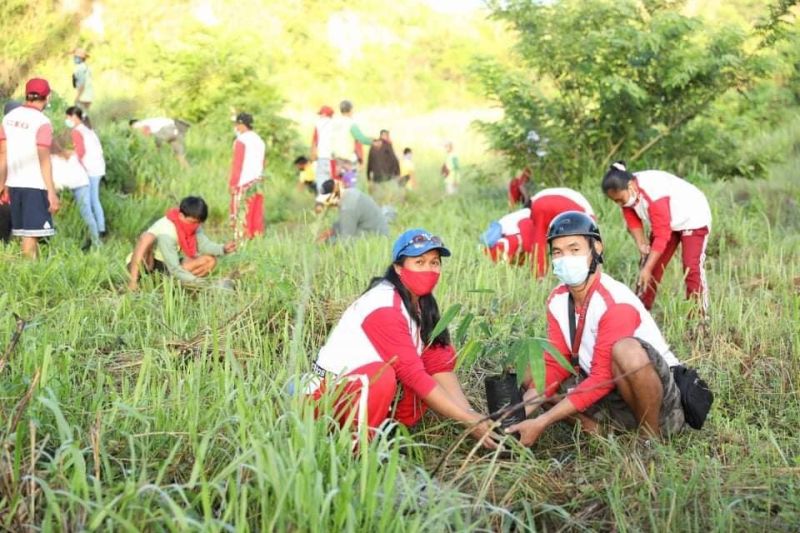 PLANTING TREES. Personnel from the Angeles City Government participate in a tree planting activity for the rehabilitation of the Angeles City Watershed in Barangay Sapangbato. The project is in partnership with the Abacan River Angeles Watershed Advocacy Council Inc. (Angeles City Information Office)

Around 1,000 seedlings of narra, molave, dau, poay and assorted fruit-bearing trees were provided by the city government, as well as free transportation and potable water for participants.

Lazatin said his office is continuously coordinating with BCDA — through Clark International Airport Corp. Vice President IC Calaguas, also his chief adviser and tactician — to entrust the stewardship of the 560-hectare watershed to the city government.

In principle, Lazatin added, BCDA officials have agreed to it and promised them that the city will protect the area.

Cenro Officer-in-Charge Archimedes Lazatin meanwhile said that the series of tree planting activities will be done until August, citing this as a long-term sustainable advocacy of the city government.

According to him, the monitoring for these planted trees will be regular, being prepared for the seen water shortage in 2030, as expert foresee.

It can be recalled that on March 19, 2021, as part of the celebration of Women’s Month, 113 female City Hall employees and volunteers led by Vice Mayor Vicky Vega-Cabigting, Lazatin’s Executive Assistant IV Reina Manuel and Gender and Development Officer Mina Cabiles planted 600 trees at the Angeles Watershed.

Safety and health protocols against Covid-19 were observed. All the participants in the tree planting activity underwent rapid antigen testing a day before the event and were all declared negative.