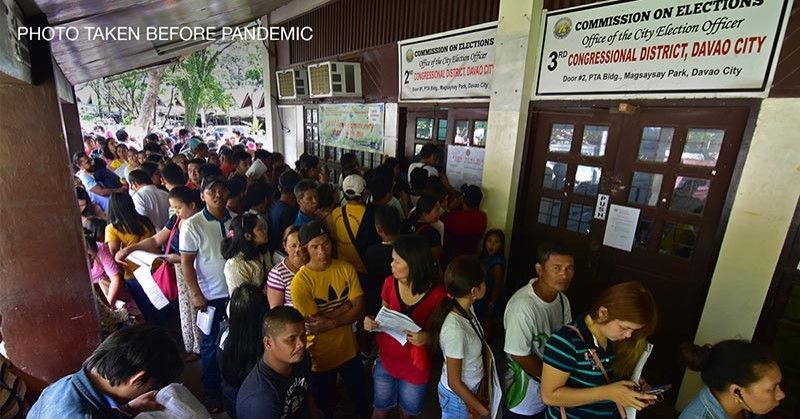 Lawyer Gay Enumerables, Comelec-Davao assistant regional director, said in a radio interview that face-to-face transactions in all Comelec offices in the city have been suspended due to the current modified enhanced community quarantine (MECQ) status.

Even if the city's MECQ status will end, Enumerables said face-to-face registration remains suspended as it is also covered in Executive Order (EO) 31, or "An Order Regulating All Barangay, Local, and National Government Offices, including Government-owned and Controlled Corporation Events" signed by Mayor Sara Duterte-Carpio. The EO takes effect until August 31.

Enumerables said they are worried considering the registration for the 2022 elections will end on September 30, 2021.

"After August 31, naa nalang mi (we only have) one month to register. Mao na amo gikabalak-an. Baka magdasa ang mga tao (We are worried because it may cause mass gathering of people)," she said.

Currently, they are in a work-from-home setup for the duration of MECQ.

However, she said registration is still ongoing for the rest of the region.

Enumerables said they are planning to conduct satellite registration in areas wherein there are no recorded new Covid-19 cases for the past 14 days.

The app allows the public to apply for voter registration by typing in the necessary information.

An encrypted quick response (QR) code will be generated once the user finishes providing all the required details.

The user may then visit the local Comelec office to have the QR Code scanned and his or her biometrics taken.

The project is currently under pilot testing in 575 cities and municipalities in the country.

Enumerables said the app aims to provide convenience to the registrant wherein they will not have to wait longer in Comelec offices to be registered.

She clarified that voter registration is still done online and the online form is still required to be presented at their respective offices and must undergo biometrics.

Despite the pandemic, Enumerables said the elections will still push through next year despite the current pandemic.

While she said adjustments will have to be made, she declined to give further details as they are still awaiting the directive from the national Comelec.