Hawks head to East finals after Game 7 win in Philadelphia 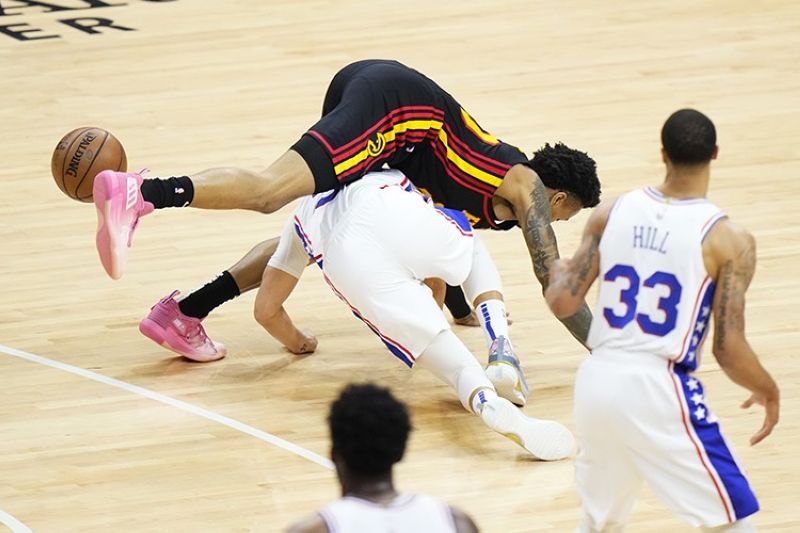 PHILADELPHIA — Trae Young ripped off his jersey and bounded up the steps to toss his dad the souvenir from the first Game 7 road victory in Hawks history.

He shook off a cold shooting night and improbably helped Atlanta become road warriors one more time, and now the Hawks are taking their stunning turnaround to the Eastern Conference finals.

They busted the Process along the way.

Young made a late 3-pointer and scored 21 points to help Atlanta win for the third time in the series in Philadelphia, a 103-96 victory over the top-seeded 76ers on Sunday night in Game 7.

The Hawks will open their first East finals since 2015 against the Bucks on Wednesday night in Milwaukee.

“I felt like they were built for this moment tonight to win this game,” coach Nate McMillan said.

But the Hawks ignored their ignominious history and got one in Philly, where they already won in Game 1 and Game 5 and knocked out Joel Embiid, Ben Simmons and closed the book on the debated rebuilding plan known as the Process.

“We gave them life from Game 1,” 76ers forward Tobias Harris said. “It's a young, hungry team.”

How's this for brazen confidence: John Collins, who had 14 point and 16 rebounds, wore for his postgame interview a T-shirt of him dunking on Embiid from Game 6.

Not so deep down, not even the Hawks could have seen this coming, especially in March when they were 14-20, 11th in the Eastern Conference and fired coach Lloyd Pierce.

Under McMillan, the Hawks turned into birds of prey and Young led a charge into the postseason for the first time since 2017 that kept rolling with a first-round win over New York.

Embiid, the NBA MVP runner-up, Simmons and a high-priced cast of stars were supposed to put the upstart Hawks in their place. It never happened.

Sixers fans let the home team have it and booed them off the court and were reprimanded by the public address announcer for throwing trash on the court.

Embiid had 31 points, 11 rebounds and eight turnovers playing with a meniscus tear in his right knee.

This marked only the second year since 1973 — when the NBA began seeding for the playoffs by conference — when neither No. 1 seed will make the conference finals. West No. 1 seed Utah was eliminated by the Clippers.

Rattled by Game 7 and a packed house on the road? Not these Hawks, who took a 26-point lead in a Game 1 victory in Philly and then rallied from 26 down on the same court to pull out Game 5.

“This team is special, man,” Huerter said. “Everybody has counted us out all year. For us to make it this far and win in this building in Game 7, it’s huge for us.”

Huerter led the Hawks with 27 points.

“With guys going out, we’re definitely telling him we need him to be more aggressive and score the ball more,” Young said. “He’s been doing that and he did it tonight.”

Young was a nonfactor in the first half. He had more pushups (three, after he was knocked to the court by Dwight Howard) than baskets (1 for 12). He even got T’d up for arguing over a rescinded foul call on the Sixers.

From New York to Philly, Young's been fearless and he refused to shrink down the stretch even when his shots didn't fall.

“I knew I had to find a way," Young said. “My shot was off. My right hand and shoulder were giving out. But my teammates showed up and made plays. I wanted to come through in the end and help them out.”

PHOENIX — Devin Booker's first exposure to playoff basketball continues to be a revelation.

Not necessarily for him, but for the rest of the NBA.

Booker had 40 points, 13 rebounds and 11 assists for his first career triple-double and the Phoenix Suns overcame Chris Paul's absence to beat the Los Angeles Clippers 120-114 on Sunday in Game 1 of the Western Conference finals.

“I don't understand why everyone's acting surprised at this point,” Suns forward Jae Crowder said about Booker's big day. “This is his first time on this stage but he's capable. He's more than capable. He're more than ready. He prepares like no other.”

Paul sat out because of Covid-19 health and safety protocols. Clippers star Kawhi Leonard missed his third straight game because of a sprained right knee.

But that's where the rally stopped for Los Angeles. (AP)