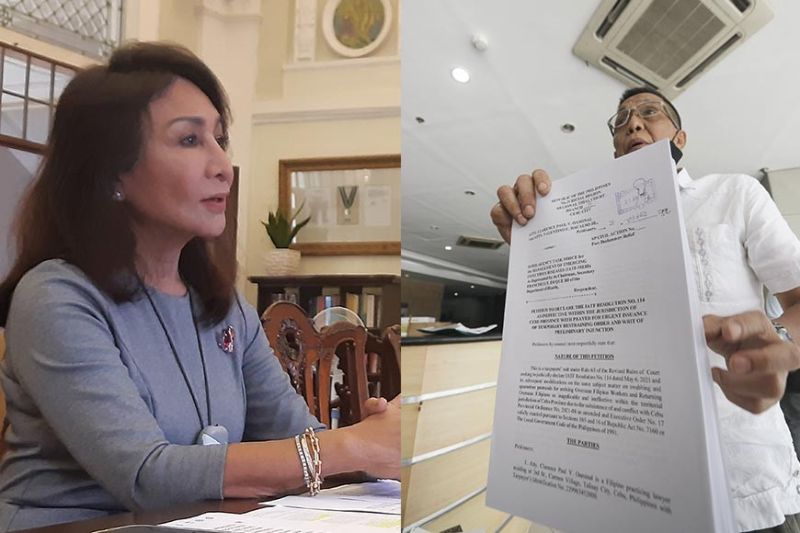 OBEY OR ELSE. In this composite photo, Gov. Gwendolyn Garcia (left) announces at the Provincial Capitol in Cebu City Monday, June 21, 2021 her issuance of Executive Order 23 reminding agencies and other parties concerned to implement Cebu’s arrival protocol for returning overseas Filipinos, or face criminal and administrative charges; lawyer Benjamin Cabrido Jr. (right) shows the petition of lawyers Clarence Paul Oaminal and Valentino Bacalso Jr. filed on June 21, 2021 to declare Inter-Agency Task Force Resolution 114 on the testing and quarantine protocol for arriving international passengers in the Philippines inapplicable in Cebu Province due to the subsistence of and conflict with Cebu Provincial Ordinance 2021-04, as amended and Garcia’s EO 17. (ARVIE N. VELOSO (LEFT), AMPER CAMPAñA (RIGHT))

THE conflict over the arrival protocols for international passengers continues, with Cebu Gov. Gwendolyn Garcia issuing an executive order reminding those who defy the local law on arriving Filipinos that they would face criminal and administrative charges.

Garcia’s Executive Order 23, issued on June 21, 2021, reminds the agencies that implement the protocols that the amended Provincial Ordinance 2021-04, which forms the legal basis for Cebu’s arrival policy, “is still an existing and valid law” and “non-compliance...will merit the filing of criminal and administrative cases against violators.”

“I called all of them to remind them that this is still a government of laws and not of men and as such, in Cebu, there is an existing ordinance which clearly spells out the swab on arrival protocol and if found negative within two or three days, may go home to continue their quarantine at home,” Garcia announced in a press conference Monday afternoon, June 21.

“Holding them beyond the two- or three-day period when there is an existing law in the Province of Cebu could expose them to possible charges of kidnapping and serious illegal detention as well as resistance and disobedience to a person in authority or agents of such person,” she added.

The EO is directed at the Department of Health, Bureau of Quarantine, Department of Tourism (DOT), Philippine National Police, Mactan-Cebu International Airport (MCIA) and other concerned agencies.

Garcia issued the latest EO about 48 hours after DOH officials met with and directed the regional directors of the government agencies in Cebu to implement the arrival protocols approved by the Inter-Agency Task Force (IATF) for the Management of Emerging Infectious Diseases.

On June 17, the IATF passed another resolution directing the police, military and other member-agencies of the National Task Force Against Covid-19 to strictly enforce the approved protocols.

DOH Undersecretary Maria Rosario Vergeire, in a virtual press briefing Monday noon, said DOH officials emphasized the need to uphold the directives of the IATF and the Office of the President.

As of June 21, health authorities have detected the Delta variant in 17 returning overseas Filipino workers (OFWs). One had died, while the rest of the cases were contained as these were detected in ports of entry and quarantine facilities.

“We cannot have non-uniformity in the implementation of our border controls. This was agreed upon. Our officials talked with the regional directors of the different agencies in Cebu last Saturday and the directive was for us to implement the measure,” Vergeire said.

Presidential Spokesperson Harry Roque Jr., in a text message Monday evening, said President Rodrigo Duterte has already “answered (the issue) in his talk to the people.”

In his regular press conference Monday, Roque appealed to returning Filipinos for understanding over the strict border controls.

“This is the only way to prevent the entry of the Delta variant,” he said. Roque is also the spokesperson of the IATF, the policy-making body for the government’s pandemic response.

Under IATF Resolution 114, arriving international passengers must undergo a 10-day facility quarantine and a reverse transcription polymerase chain reaction (RT-PCR) test for the coronavirus on the seventh day. The four remaining days are spent under strict home quarantine.

Exempted from the rule beginning June 22 are passengers who were fully vaccinated in the Philippines.

Police officers and military personnel have reportedly been deployed at the airport, although Rivas did not confirm this.

The governor, however, confirmed that not all OFWs and returning overseas Filipinos who arrived on Sunday, June 20, underwent a swab test based on Provincial Ordinance 2021-04.

The ordinance mandates that Cebu residents who test negative will be released from hotel quarantine after three days at most, and undergo facility or home quarantine for the remainder of the 14-day period. They will be swabbed again on the seventh day by their local government unit (LGU).

Non-residents of Cebu who test negative upon arrival at MCIA will also be allowed to proceed to their LGU, which will also swab them on the seventh day.

“We had thought that in the interim, from the extension of my invitation to the arrival of our technical experts here in Cebu and their eventual presentation to the Provincial Board, it would have maintained a status quo,” Garcia said, referring to the invite she extended during the Senate hearing last week to DOH Secretary Francisco Duque III.

“But contrary to my expectations done in good faith, there were certain members of the IATF that ordered the police, that ordered the DOT as well as the DOH and other agencies to fully implement the IATF guidelines,” Garcia said.

Also on Monday, two Cebuano lawyers filed a petition before the Regional Trial Court (RTC) to declare IATF Resolution 114 as ineffective in Cebu Province and stop its implementation.

Cebu City Acting Mayor Michael Rama said he wished the matter could be discussed instead.

Rama, who supports the policy of the Cebu Provincial Government, said filing a case makes the situation “confrontational, adversarial.”

“That’s why I am really standing in support, but it’s not that we should be perceived as we are against the President,” said Rama.

Rama said he wished a status quo can be maintained until the DOH officials and IATF experts arrive in Cebu.

Duque had accepted Garcia’s invitation to send the IATF experts to Cebu so they can discuss the issue with the Provincial Board (PB).

President Duterte warned the judiciary that at this time of a national emergency, he will not obey any court orders in the matter of managing the pandemic.

He also said he will leave the fate of Garcia to the Department of the Interior and Local Government.

Meanwhile, PB Member John Ismael Borgonia said they will look for other medical experts who will present the data supporting Cebu’s arrival protocols when they meet with the IATF experts on June 28 since a gag order has been imposed on Dr. Mary Jean Loreche, DOH 7 spokesperson.

Loreche briefed PB members on the Covid-19 situation in Cebu Province in a closed-door meeting on Monday.

“We will commission our own medical experts who can present supporting data because Dr. Loreche, although she is with us, could not contradict the DOH central office,” Borgonia said. (ANV / JJL / JOB / MVI)
< Previous PageNext Page >