'Sparu' killed in clash with soldiers 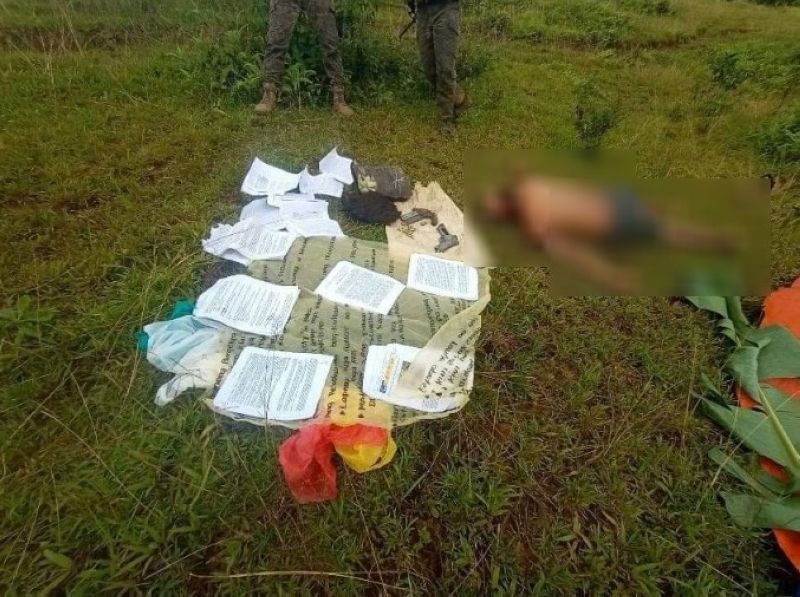 NEGROS. A member of the Special Partisan Unit was killed by the Army in an encounter in Sitio Icugan, Barangay Minapasuk, Calatrava, Negros Occidental Tuesday, June 22, 2021. (Contributed Photo)

AN ALLEGED member of the Special Partisan Unit (Sparu) was killed by the operating troops of 79th Infantry “Masaligan” Battalion in an encounter in Sitio Icugan, Barangay Minapasuk, Calatrava, Negros Occidental on June 22, 2021.

The troops were conducting a security operation in Barangay Minapasuk after receiving reports from concerned civilians about the presence of communist terrorist groups (CTGs) who were allegedly conducting extortion activities in the area when an undetermined number of CTG members fired upon them, prompting the troops to return fire.

The firefight lasted for about five minutes, forcing the enemy to scamper toward different directions, leaving their dead comrade behind, the military report said.

Seized from the encounter site were one caliber .45, one revolver .38, and subversive documents.

No reported casualties from the government troops while an undetermined number of CNTs were believed to be wounded due to bloodstains seen along the rebels' route of withdrawal.

According to Guilot, Pahayahay has been reportedly recruiting members to join his group while conducting extortion activities, sowing fear to the local populace.

Meanwhile, Lieutenant Colonel J-jay T Javines, commanding officer of 79th IB, appreciated the valuable information from the residents about the presence of armed elements, which prompted the troops to respond to the call of the people to preserve the peace in the community.

"The cooperation of the residents clearly shows their desire to completely eradicate the communist insurgency in their communities. They are already fed up. That is why we will not also put our guards down and allow these terrorists to continue to sow fear to the local populace, we need to work together to build communities that are inhospitable to enemies of the state, free from fear, of being used and exploited by the CTGs," Javines said.

Javines also called on the remaining NPA to lay down their arms peacefully and encourage them to avail themselves of the government's Enhanced Comprehensive Local Integration Program (E-Clip), and live a normal life with their families.

Moreover, Calatrava Mayor Marilyn Era in a statement lauded the Philippine Army for its commitment and dedication to ensuring the safety of the people and for the quick response to the reports of the residents.