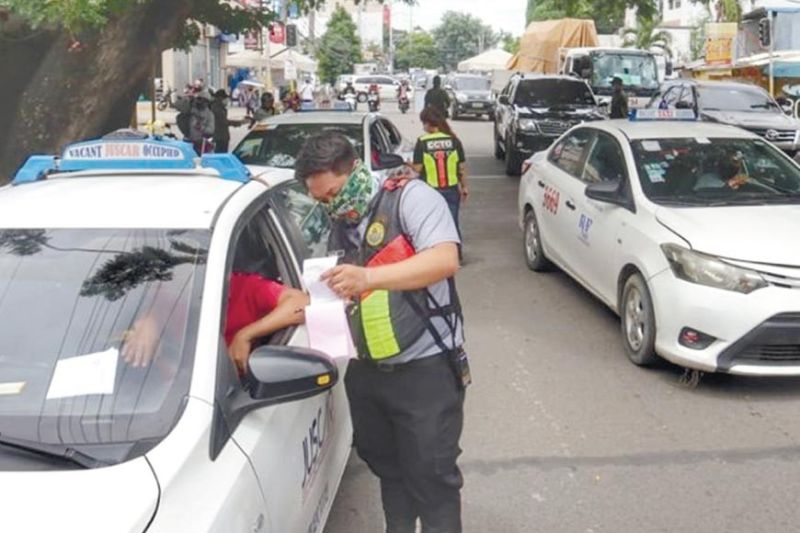 DOING HIS JOB. A traffic enforcer of the Cebu City Transportation Office (CCTO) checks the license of a taxi driver and vehicle documents. Officials of CCTO will launch a program that will allow the public to report traffic enforcers for errant behavior, such as extorting money from motorists. / SunStar file

A PROGRAM initiated by the Cebu City Transportation Office (CCTO) that will encourage the public to report erring traffic enforcers is gaining the support of Mayor Edgardo Labella.

In a statement in his official Facebook page, Labella said he supports the “Itug-an sa OIC-Traffic” program initiated by CCTO as this will help in cleaning the city’s ranks of scalawags.

“I am one with my fellow Cebuanos in this community effort and I am glad that the CCTO has come up with this initiative. We do not want rotten eggs to compromise the hard work of traffic enforcers nga nagtinarong sa ilang trabaho (that are not doing their work),” Labella said, in his FB page.

Lyntoni Alburo, CCTO acting chief, and Lt. Col. Clark Arriola of the City’s Traffic Enforcement Unit, initiated the program after Romeo Cadutdut, one of CCTO’s traffic enforcers, was caught in the act of extorting money from a motorist who apprehended for a traffic violation.

Officers of the Criminal Investigation and Detection Group (CIDG) Central Visayas initiated the entrapment operation against Cadutdut on Friday, June 18, 2021, after Alburo filed a complaint against the traffic enforcer.

Alburo said those who have complaints against their traffic enforcers due to illegal matters can text the official hotlines of TEU or through CCTO at this numbers: 09065389631/ 09912241619. ( PAC / JKV)