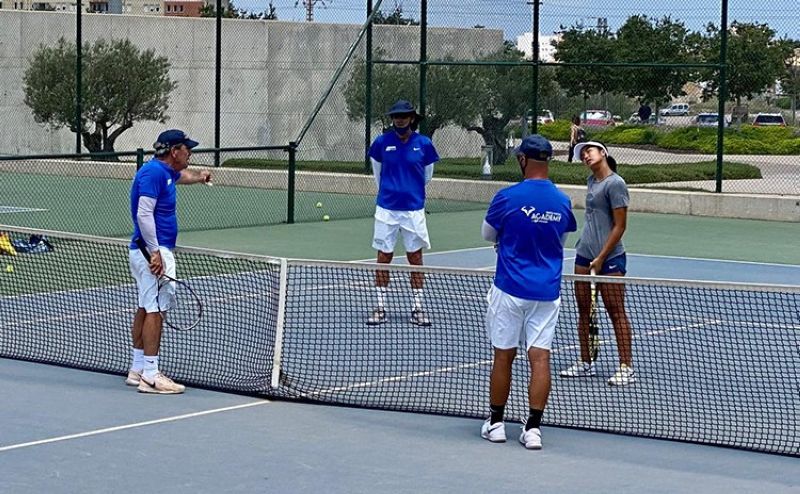 Filipina tennis star Alex Eala is hard at work, preparing for her stint in the upcoming 2021 Wimbledon in London. (Alex Eala Facebook page)

Filipina tennis star Alex Eala is brimming with excitement over her very first stint in the Wimbledon tennis tournament next week in London.

Fresh off her title win in the girls’ doubles in the 2021 French Open with partner Oksana Selekhmeteva of Russia, the 16-year old is aiming to add another grand slam title to her collection. Eala has also won the Australian Open doubles crown in 2020, playing with Priska Nugroho of Indonesia.

"I'm super excited to go to London, it's going to be my first time there, and my first time competing on grass," Eala said in a press conference organized by Globe on Tuesday afternoon.

"That's going to be a new learning experience for me, I'll be going there not expecting anything. I'll take it match by match," added the bubbly yet resilient youngster.

She also shared that she’s hard at work, playing in hard courts to simulate the playing conditions of Wimbledon’s grass.

"I should be able to adjust to it quite well. My team has been working on overall improvement," said Eala.

Eala has made quite the splash in the tennis scene this year, winning her very first professional title in the W15 Manacor in January. Ranked no. 3 in the juniors rankings, Eala has also made a giant leap in the Women’s Tennis Association singles rankings where she is currently ranked no. 627. (JNP)