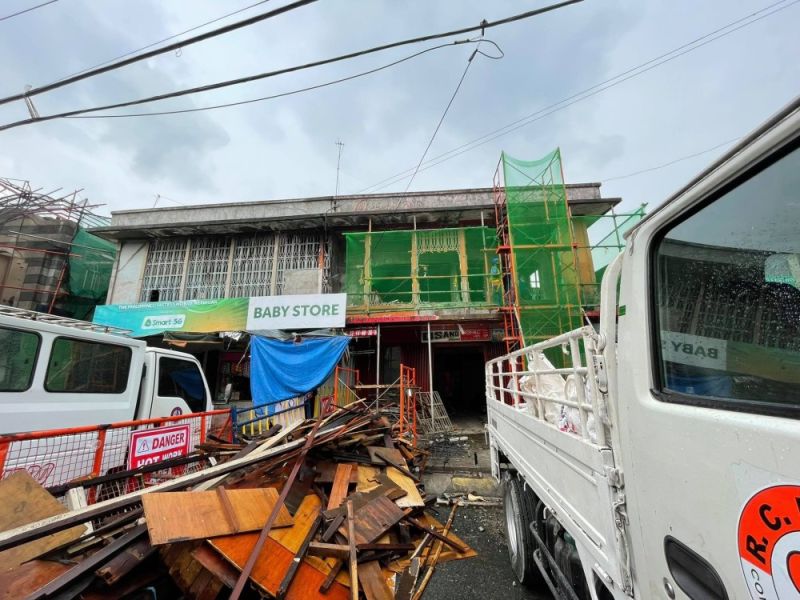 ON WITH THE REHAB. Workers continue with the rehabilitation and renovation of the old public market in the City of San Fernando. (Chris Navarro)

THE Regional Trial Court (RTC) in the City of San Fernando has denied the Pampanga Fernandino United Merchants and Traders Association’s (Fumta) complaint with prayer for issuance of a temporary restraining order (TRO) “seeking the discontinuance of the implementation of any demolition and relocation” of vendors in the ongoing rehabilitation and renovation of the decades-old public market located in the poblacion.

A copy of the resolution dated June 18, 2021 and obtained by SunStar Pampanga and penned by Presiding Judge Edgar Chua of RTC Branch 47 on Civil Case 15077 (Fumta vs City Mayor Edwin Santiago, et. al.) noted that the vendors’ group alleged in the complaint and prayer for issuance of a TRO and preliminary injunction filed on May 24, 2021 and heard on June 4, 2021 that “it has the right to seek the discontinuance of any demolition and relocation” the old public market and of traders.

It also included “to first prove ownership of the property and the legal basis of the construction of the proposed building; under the circumstances, a TRO and/or a Writ of Preliminary Injunction must be issued enjoining the defendants (City Government) to proceed in the demolition of the building and relocation of the plaintiff-members’ (Fumta) private stores; that if no emergency writ be issued stopping the defendants and their agents in implementing the demolition of their stores and building, it will render plaintiff-members right to question the legality of the demolition of the building and relocation as inoperative, considering that there are ordinance or resolution issued by the Sangguniang Panglungsod on this matter as provide by RA 7160; that the plaintiffs are entitled to the relief demanded consisting of restraining the commission or continuance of the acts of the defendants will obviously lead to actual damages that will be incurred when they will be relocated to small, cramped and defective stalls, sustained business losses and the loss of their possessory right on their stalls, among others.”

The resolution also noted that the City Government filed its opposition to the prayer for a TRO, arguing that “Republic Act 8975 expre4ssly prohibits lower courts from issuing temporary restraining orders, preliminary injunctions or preliminary mandatory injunctions to ensure the expeditious implementation and completion of government infrastructure projects,” as the policy behind the law is “it is in the public interest to adopt a similar prohibition against the issuance of such restraining orders or injunctions in other areas of activity equally critical to the economic development of the nation, in order not to disrupt or hamper the pursuit of essential projects. It further argued that only the Supreme Court shall issue any temporary restraining order, preliminary injunction or preliminary mandatory injunction against government.”

For their part, the vendors’ group argued that RA 8975 may not apply in the rehabilitation of the old public market, as “it is not a national government infrastructure project” and without a TRO, “grave injustice and irreparable injury will arise.

It added that in the group’s complaint and judicial affidavits, “they presented substantial documentary and testimonial proof that their protected rights to due process were violated, as the defendants arbitrarily and despotically began to implement demolition procedures without giving plaintiffs the right to be heard and provide just compensation on the buildings that they have already demolished and intend to demolish.

In addition, the defendants did not even furnish any documents to the plaintiffs (e.g. layout/floor plan of the proposed building, ordinance/s and resolution/s on the construction of the proposed building and awarding of the stalls and the alleged certificate of award, in order that they will be guided on the defendant’s actions as they are stakeholders and partners in this project.”

In resolving to deny the plaintiffs prayer for the issuance of a TRO and preliminary injunction, the court stated that jurisprudence has established that the following requisites must be proven before a writ of preliminary injunction, whether mandatory or prohibitory may be issued: 1) The applicant must have a clear and unmistakable right to be protected, that is a right in esse; 2) There is a material and substantial invasion of such right; 3) There is an urgent need for the writ to prevent irreparable injury to the applicant; and 4) No other ordinary, speedy and adequate remedy exists to prevent infliction of irreparable injury.

The resolution also noted that “a right is vested when the right to enjoyment has become the property of some particular person or persons as a present interest. It is unalterable, absolute, complete and unconditional. A right in esse is a clear and unmistakable right to be protected, one clearly founded on or granted by law or is enforceable or a matter of law. It appears that what plaintiffs-petitioners have is a license to occupy and operate particular stalls in the public market of the City of San Fernando, Pampanga. Their possession and use of these facilities could not be characterized as fixed and absolute. The lease (and occupation) of a stall in a public market is not a right but a purely statutory privilege governed by laws and ordinances. Moreover, a public market is one dedicated to the service of the general public and operated under government control and supervision as a public utility.”

“Wherefore, premises considered, the prayer for the issuance of the Writ of Preliminary Injunction is hereby denied,” the resolution stated.