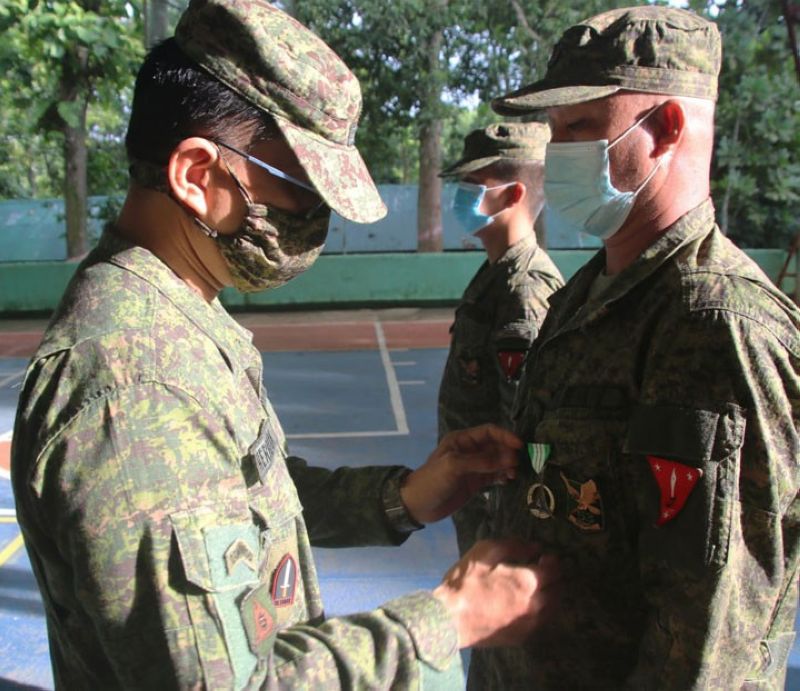 ZAMBOANGA. The Army's 53rd Infantry Battalion (IB) awards Military Merit Medal (MMM) and Military Commendation Medal (MCM) to six personnel for their exemplary dedication to duty. A photo handout shows Lieutenant Colonel Jo-ar Herrera, 53IB commander (left), pins a medal to one of the six awardees in a ceremony Monday, June 21, at the headquarters of the battalion. (SunStar Zamboanga)

Lieutenant Colonel Jo-ar Herrera, 53IB commander, said that four of the six soldiers were awarded MMM for the capture of weapons and war materiel in a series of combat operations against the New People's army (NPA) rebels.

Sergeants Lemuel Moncada and Jay-ar Castillano were awarded MCM for their accomplishment due to the conduct of Youth Leadership Summit in the hinterland village of Pange, Siayan, Zamboanga del Norte.

Herrera, who led the awarding of medal on Monday, thanked the awardees for their service to God, country, and people.

"The higher headquarters does not forget what you have done for the country, people, and the organization. It is only high time to honor your sacrifices," Herrera told the awardees. (SunStar Zamboanga)