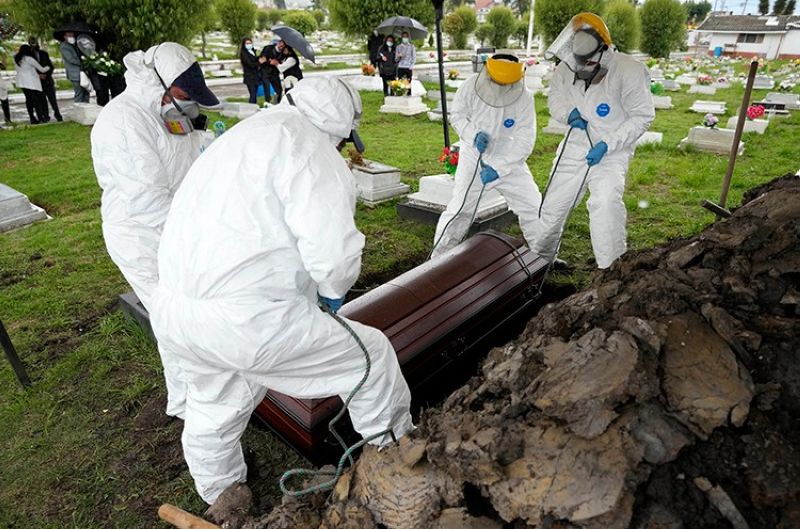 COLOMBIA. Cemetery and funeral workers lift a coffin containing the remains of a man who died of Covid-19, at the Zipaquira's Park Cemetery in Zipaquira, Colombia, Friday, June 18, 2021. (AP)

BOGOTA, Colombia -- Colombia reached 100,000 confirmed deaths from Covid-19 this week, becoming just the tenth country in the world to hit the grim milestone.

The South American nation of 50 million has been registering a growing number of daily cases since April and over the past seven days it had the world’s third-highest per capita death rate from Covid-19, according to data published by Oxford University.

On Monday night, President Iván Duque blamed antigovernment protests that began at the end of April for many of the fatalities, saying that “more than 10,000 deaths could have been avoided” if Colombians had not held large gatherings over the past seven weeks.

But epidemiologists in Colombia said it is too soon to tell how much of an impact the protests had on the current surge in Covid-19 deaths.

“The protests definitely played a role” in coronavirus contagion, said Diego Rosselli, a professor of epidemiology at the Javeriana University in Bogota. “But at this moment putting any number on how many deaths they caused is mere speculation."

Rosselli said more contagious variants of the virus may have contributed to the sharp acceleration in death rates, as has happened in nearby countries like Argentina and Brazil.

Fatigue with sanitary measures – like using facemasks – crowded living arrangements and fewer restrictions on gatherings have also fueled contagion in Colombia and elsewhere in South America. The region makes up just five percent of the world’s population but accounts for almost a quarter of all Covid-19 deaths.

In Colombia, the rise in cases comes as the government lifts some of the last restrictions it had put in place to control the spread of the coronavirus and allows nightclubs, bars and cinemas to open for the first time in more than a year.

Cities like Medellin and Bogota are also preparing to hold trade shows and music events that will be attended by thousands of people, while 10,000 people recently attended a soccer match in the coastal city of Barranquilla.

Municipal governments say they have no option but to allow these events in order to regain jobs and help the economy get back on its feet.

Vaccination sped up in June with up to 350,000 doses administered in one day, but only 10 percent of Colombia's population is fully vaccinated.

Doctors fear that recent decisions to allow more gatherings will increase the number of severely ill patients arriving at hospitals, which are already struggling to cope. In Bogota, Cali and Medellin, more than 95 percent of intensive care beds at hospitals are already occupied.

Paola Cabra, an emergency room doctor in the Samaritana University Hospital in Bogota, said the best thing would be to return to lockdowns to decrease infections.

“But in a country like Colombia you can’t do that,” Cabra said. “Most people here work independently to make a living and cannot afford to stay home doing nothing.”

The hospital’s 19 intensive care units for Covid-19 patients have been full for weeks, forcing staff to add respirators and other equipment to ER beds.

“I would like to be wrong,” Cabra said. “But it looks like the situation will get worse in the following weeks.” (AP)