Messages of condolences pour in for PNoy 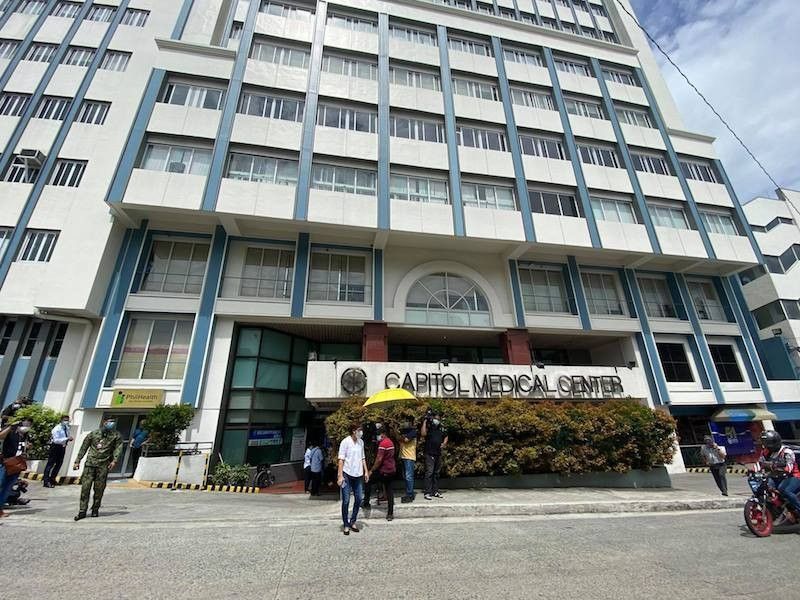 MANILA. Some members of the media gather at the Capitol Medical Center, following reports of former President Benigno S. C. Aquino III, known as PNoy, being rushed to this hospital in Quezon City on June 24, 2021. (Third Anne Peralta-Malonzo)

President Rodrigo Duterte, in a message issued about 12 hours after Aquino's death, urged the nation to "unite in prayer and set aside differences" to pay respects to Aquino.

"I join the entire nation in mourning the passing of former President Benigno S. Aquino III. I express my deepest sympathies to his siblings, Ballsy, Pinky, Viel and Kris, as well as to all his loved ones, friends and supporters, in this period of sadness. May you take comfort in the knowledge that he is now in a better place with his Creator," Duterte stated.

"Let us all take this opportunity to unite in prayer and set aside our differences as we pay respects to a leader who has given his best to serve the Filipino people. His memory and his family's legacy of offering their lives for the cause of democracy will forever remain etched in our hearts," he added.

Here are some of the other messages:

“We commiserate and condole with the family and loved ones of the former President Benigno Simeon ‘Noynoy’ Aquino III as we extend our condolences on his untimely demise. We are grateful for the former President for his contribution and services to the country. We ask the people to offer a prayer for the eternal repose of the soul of former Chief Executive. Rest in peace, Mr. President.”

“Nakakadurog ng puso ang balitang wala na si PNoy. Mabuti siyang kaibigan at tapat na Pangulo. He tried to do what was right, even when it was not popular. Tahimik at walang pagod siyang nagtrabaho para makatulong sa marami. He will be missed. Nakikiramay ako sa kanyang pamilya.”

“I’m out of Twitter from grief over the death of a sea-green incorruptible, brave under armed attack, wounded in crossfire, indifferent to power and its trappings, and ruled our country with a puzzling coldness but only because he hid his feelings so well it was thought he had none. It was the way he and his siblings were raised by a great woman—their mother and of our restored democracy (without her none in power yesterday and today would be). She created the democratic space that made it possible. She believed that one must never let oneself go no matter the occasion or provocation; showing feelings was vulgar which I too believe but am guilty of. It is a hard ethic. Blood always shows. I beg his sisters to allow me the honor to share their grief. He wasn’t fond of me but I could not bring myself not to admire him."

“It is with profound sadness that I learned this morning of the passing of former President Benigno S. Aquino III. I knew him to be a kind man, driven by his passion to serve our people, diligent in his duties, and with an avid and consuming curiosity about new knowledge and the world in general. I have learned a lot from him. I saw him carry his title with dignity and integrity. It was an honor to have served with him. He will be missed."

“No matter what political side you're on, when a former President passes away, the country mourns. His death diminishes us all. Sincerest condolences from the Senate and my family to the family of President Benigno C. Aquino III.”

"We are saddened to learn of the passing of former President Benigno “Noynoy” Aquino III. The entire House of Representatives would like to extend its heartfelt sympathies and condolences to his family, friends and colleagues at this difficult time. The nation mourns with you and celebrates the life of a man who dedicated his service to the country as a three-term Representative of the Second District of Tarlac in Congress, Senator, and President of the Republic of the Philippines. May his soul rest in peace."

“My heartfelt condolences to the family of former President Benigno C. Aquino III, a "classmate" in Congress from 1998 to 2007. I will always treasure the memories of our long years together as freshmen legislators and members of a tiny opposition. For beyond politics and much public acrimony, I knew Noynoy the kind and simple soul. He will be deeply missed."

"We join the nation in mourning the passing of our former President Benigno “Noynoy” Aquino III. Continuing the legacy of his esteemed parents Ninoy and Cory, PNoy introduced widespread reforms and espoused a strong anti-corruption policy during his presidency.

‘Walang wang-wang, walang counterflow, walang tong. Walang tongpats. Kayo ang boss ko.’ These are just some of the quotes of PNoy that are forever etched in the hearts and minds of every Filipino and aptly captures his stance against the abuse of power by the people in power.

Rest well knowing that in time your own legacy will be remembered as it should be, from a perspective that is objective. You have earned your place in the annals of Philippine history. May the Lord bring comfort to PNoy’s siblings and rest of the Aquino clan.”

"Noynoy and I may have had political differences during the last few years of his term, but that will not diminish the many years of friendship between our families. My deepest condolences to the family. Godspeed, Pareng Noy."

“As Commander-in-Chief, he recognized the importance of equipping our military to better respond to the evolving domestic and regional security challenges. We extend our deepest sympathies to the Aquino clan during this difficult time.”

“Ateneo de Manila University is one with the Filipino nation in mourning the death of former President Benigno Simeon Cojuangco Aquino III, the 15th President of the Philippines and a distinguished Ateneo alumnus (GS '73, HS '77, AB Eco '81). In his last public address as President, Noynoy came home to Ateneo and addressed the graduating class of 2016, encouraging them to truly be of service to others.”