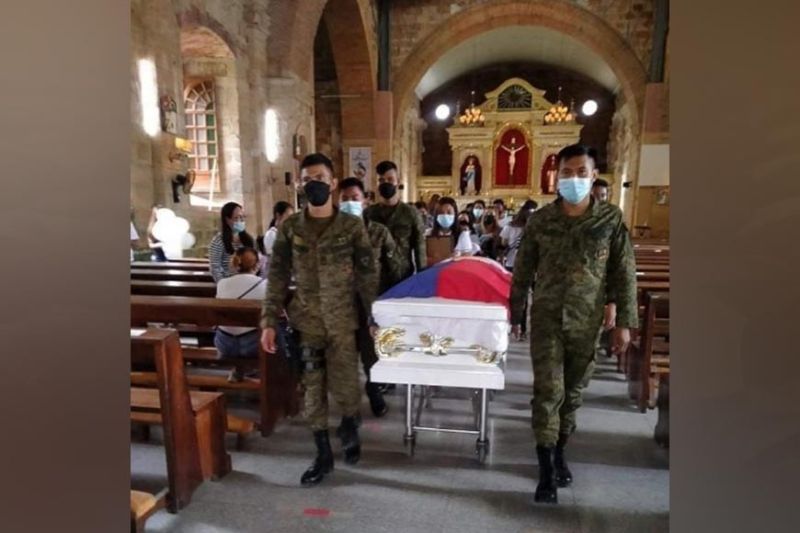 NEGROS. The family of Corporal Rodney Luces, a soldier who died in the Himamaylan encounter, gathers to pay their last respect and to honor his bravery and heroism in serving the country. (Contributed photo)

CORPORAL Rodney Luces, a soldier who died in the Himamaylan encounter, was laid to rest at Alimodian Public Cemetry Thursday, June 24, 2021.

Luces died in a clash between the troops of the 62nd Infantry Battalion and the Communist Party of the Philippines-New People’s Army in Purok Galaupan, Barangay Carabalan Himamaylan City two weeks ago.

Family members gathered to pay their last respects to Luces and honor his bravery and heroism in serving the country.

The Philippine flag, which had been draped over Luces’s casket as soldiers carried his remains to its final resting place, was handed to his wife at the end of the ceremony.

Major General Eric Vinoya, commander of the Army’s 3rd Infantry (Spearhead) Division, said in his statement that the 3ID salutes the courage of Luces by offering his life in the pursuit of genuine peace and development in Negros Island.

“We are saddened by your loss, but rest assured that we will always reminisce your fearlessness and boldness in serving and securing the people of Negros. Your story will not end here. It will serve as our guiding motivation in ending the decades-long insurgency,” Vinoya said.