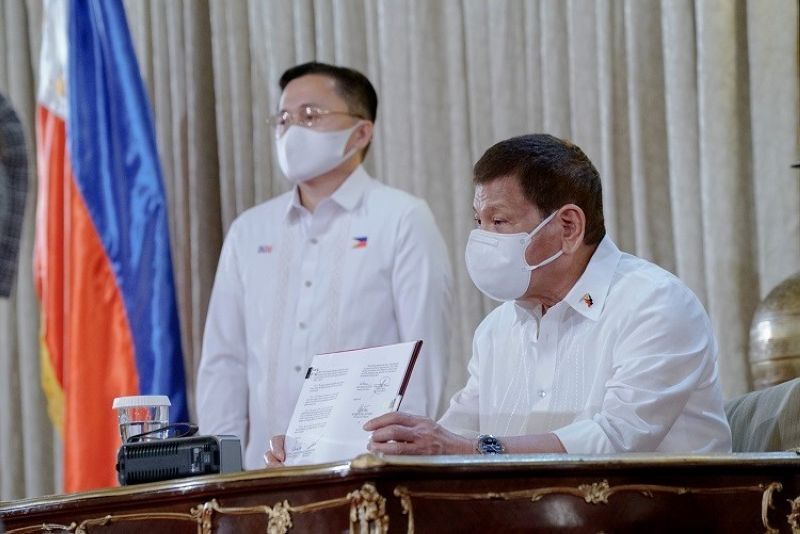 In a signing ceremony attended by some members of the Congress at Malacañang, Duterte signed 16 laws, 13 of which were health-related and sought to increase the bed capacity of hospitals in various parts of the country.

The president said the government is committed to providing the Filipino people “equitable and sustainable service” in healthcare.

"Thirteen of these laws are health-related and are all very crucial in strengthening the capacity of our healthcare system as we continue to overcome the current pandemic,” Duterte said in his speech.

He said the new laws would “make quality medical service more accessible to our peoples especially those in the far-flung area.”

“Increasing the bed capacity of existing public hospitals would likewise greatly augment our inventory of [much]-needed hospital beds that we badly need as we deal with a pandemic,” he added.

With the passage of health-related bills into law, Duterte said his administration listens to the plight of medical frontliners, and that the government, along with the Congress, will continue to equip them "with proper and functional medical supplies and logistics."

Davao Occidental Representative Lorna Bautista-Bandigan, author of the House of Representatives Bill 7321, said the establishment of the general hospital would complement and amplify the effectiveness of the province’s health system by providing continuous delivery of medical services for acute and complex medical conditions of local patients and those from neighboring provinces who want to avail themselves of its services.

Go said the establishment of the Davao Occidental General Hospital is long overdue and its budget must be addressed at the soonest possible time since residents have to travel more than 200 km. to Davao City for needed medical attention.

Bautista-Bandigan said it takes three to four hours of land travel before residents of the province could avail themselves of the services of tertiary hospitals that are located in Davao City.

The hospital is currently under construction in Barangay Lacaron in Malita town, the capital of the province.

Marivic Hubac, chief of staff of Bandigan’s congressional office, said the construction of the Davao Occidental General Hospital started in 2020 with a budget of P200 million from the Department of Health.

Expected to be operational in the first or second quarter of 2022, it will be a 100 bed-capacity hospital with more units to be added annually to increase its occupancy and services.

Davao Occidental was created on Oct. 28, 2016 separated from Davao del Sur following a referendum. (With reports from PNA)