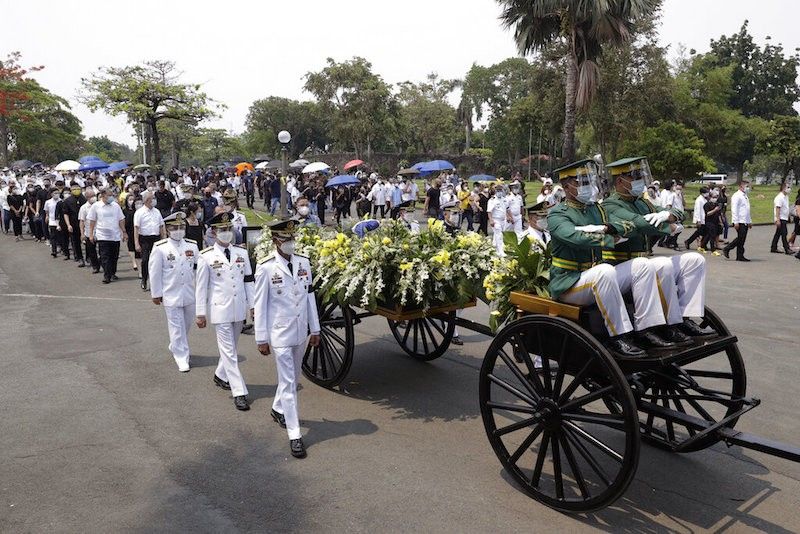 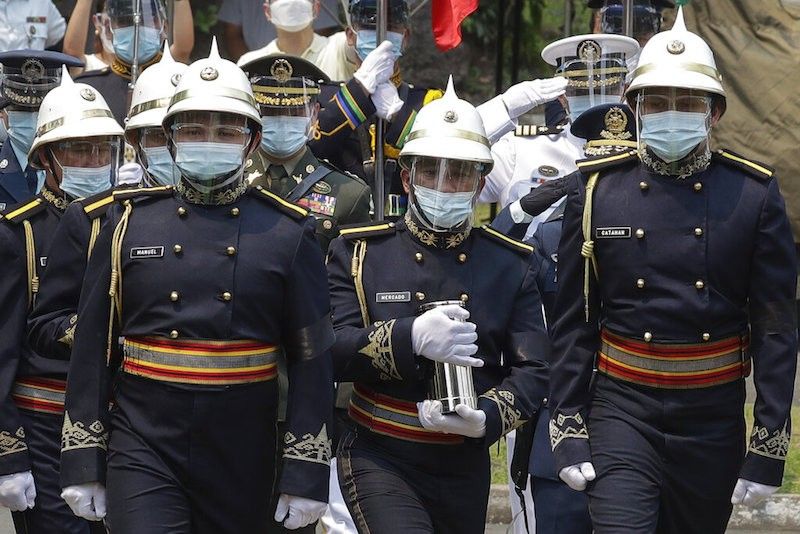 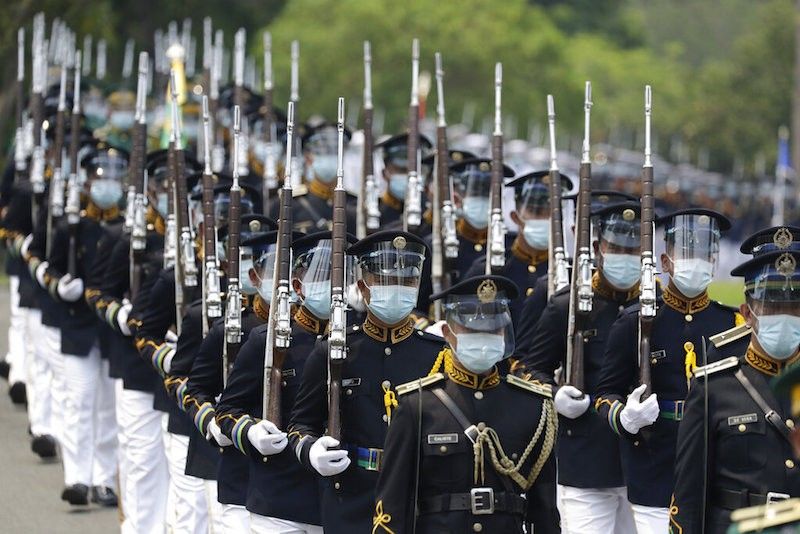 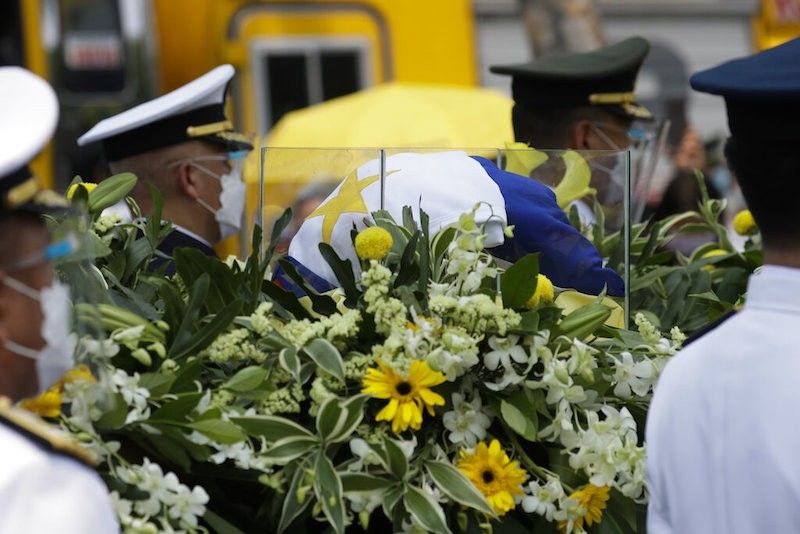 MANILA. The Philippine flag is placed on the urn of former President Benigno Aquino III during burial rites on Saturday, June 26, 2021. (AP) 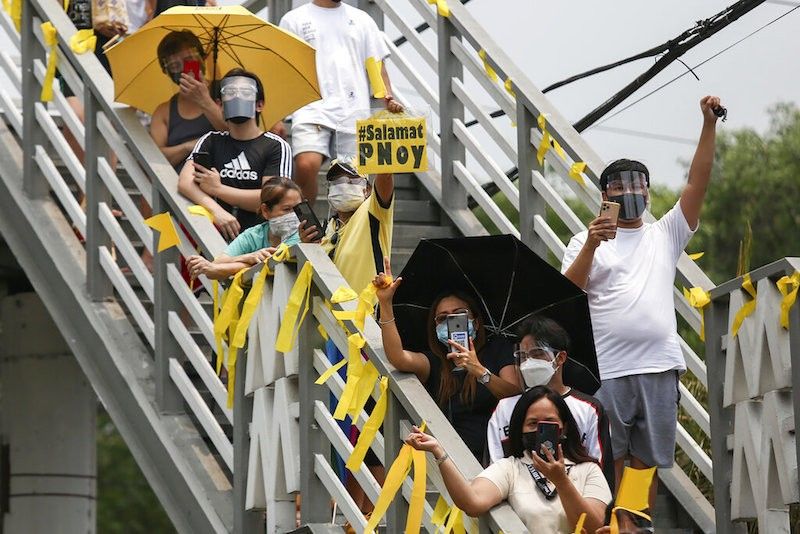 MANILA. Yellow ribbons are tied to the railings while supporters of former President Benigno Aquino III carry signs during a motorcade before his burial in Quezon City on Saturday. June 26, 2021. (AP) 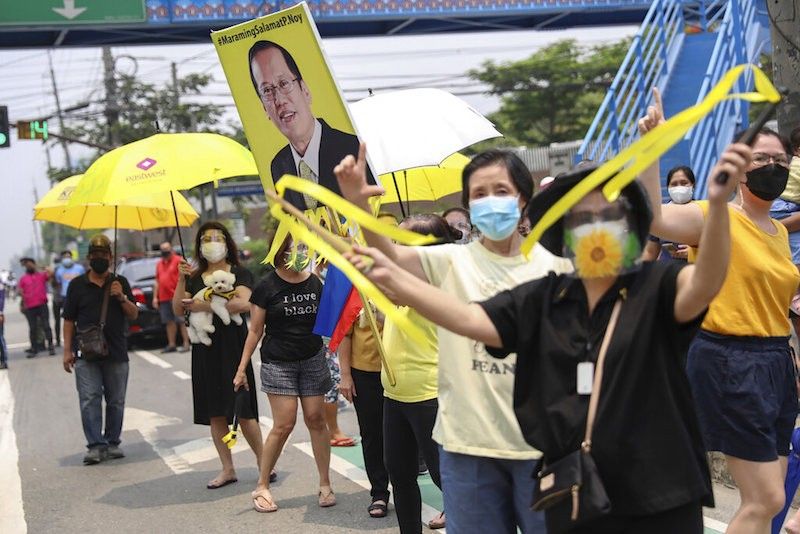 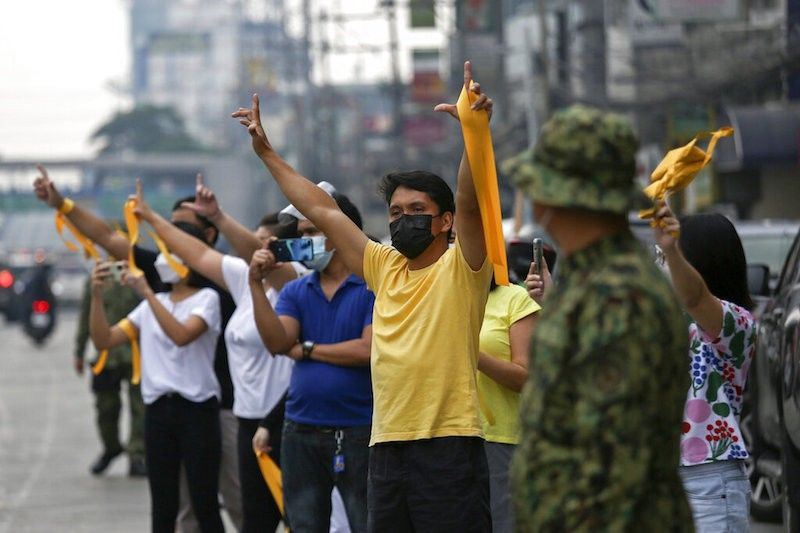 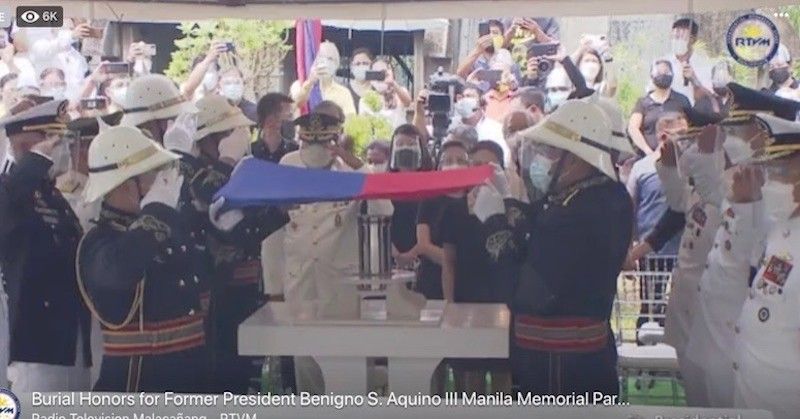 MANILA. In this screenshot taken from Malacañang video, military generals who served as pallbearers salute as honor guards hold the Philippine flag over the urn containing the cremated remains of former President Benigno Simeon C. Aquino III during the inurnment at the Manila Memorial Park on June 26, 2021. (State-owned RTVM video)

The urn containing the cremated remains of Aquino was interred beside his parents, the late former senator Benigno “Ninoy” S. Aquino Jr. and the late former President Corazon “Cory” C. Aquino, at the Manila Memorial Park.

Lingayen-Dagupan Archbishop Socrates Villegas, in his homily during the funeral mass for Aquino Saturday morning, described the former President who was also known as PNoy as a “brave, headstrong visionary” whose focused vision was the rule of his leadership.

“PNoy died as he lived. He served without fanfare. He abhorred power trappings and power tripping. He slipped away quietly as much as possible disturbing no one. Walang wang-wang, very PNoy and not surprising,” Villegas said.

He hoped that Aquino’s “death will spark another fire within us to resurrect his example of decency and integrity.”

Villegas, a former president of the Catholic Bishops Conference of the Philippines, urged Filipinos to take notice of what is happening in the country.

“Eulogies have been written and spoken and shared. But the best eulogy tribute we can pay to our dear President Noy is to bring back, recover, preserve, safeguard and never again to compromise our dignity as a people and the decency of our leaders as servants, not bosses,” Villegas said.

“The flags at half-mast are not only for the dead President, but for the dying decent governance. Tayo ang boss n’ya. He lived by it. We are grateful for it,” he added.

He died in his sleep as the sun rose on June 24, 2021. His family later announced that his death certificate traced his death to renal disease secondary to diabetes.

During his administration, the Philippines stood up to China and won an arbitration ruling that dismissed China’s nine-dash claim over the South China Sea.

He was charged over the Mamasapano bloodbath that killed 60 people, including 44 Special Action Forces men. But the Supreme Court cleared him of all charges.

His administration was also criticized over its handling of the aftermath of the Supertyphoon Yolanda (Haiyan) in November 2013 and the Dengvaxia controversy that erupted in December 2017.

A funeral mass was held for Aquino Saturday at the Church of the Gesu inside the Ateneo de Manila University, where public viewing of the urn containing his remains was held Friday, June 25. ADMU is the alma mater of Aquino.

Throughout the day on June 25, the Armed Forces of the Philippines rendered a 21-gun salute, firing a cannon every 30 minutes from 6 a.m. to 5 p.m., to honor their former Commander in Chief.

After eldest sister Ballsy Aquino-Cruz gave her eulogy towards the end of the requiem mass on Saturday, a standing ovation for about three minutes was rendered for the late President.

After the mass, a convoy of vehicles transported the urn to the Manila Memorial Park. It was met with a water salute upon exiting ADMU and another water salute just before entering the memorial park.

Along the route, scores of Filipinos waved yellow ribbons and flashed the Laban (fight) sign as the convoy passed. The yellow ribbon is the symbol of the Aquino legacy while the Laban sign was the gesture used in the struggle against the Marcos dictatorship and during Cory's campaign for the 1986 snap presidential elections. More supporters waited at the entrance to and inside the park.

A 21-gun salute was rendered just before a funeral march led by a brigade-sized military contingent was held inside the memorial park with members of the Aquino family, relatives, friends, political allies and supporters. Philippine Air Force helicopters dropped flowers as they flew by.

Another water salute was rendered as the funeral march neared the Aquino tomb and another 21-gun salute was fired as honor guards held the Philippine flag over the urn shortly before the inurnment.

President Rodrigo Duterte has ordered a 10-day period of national mourning for Aquino until July 3, during which the Philippine flag is flown at half-staff in all government buildings nationwide.

In a statement, the AFP said it will observe 30 days of mourning from the notice of death on June 25, during which all military personnel will wear black armbands over the left arm sleeves of their uniform. The flag will be flown at half-staff in all military camps until July 4. (Marites Villamor-Ilano with a report from HDT / SunStar Philippines)