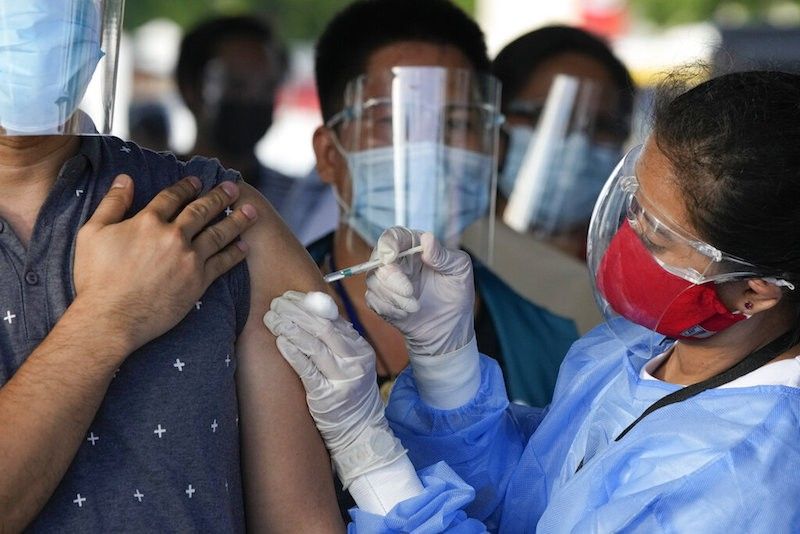 MANILA. A health worker inoculates a man with China’s Sinovac Covid-19 vaccine at a temporary vaccination center in Manila on June 22, 2021. (AP)

THE Department of Health (DOH) on Tuesday, June 29, 2021, reported less than 5,000 new cases of coronavirus disease 2019 (Covid-19), the lowest in six days, as 14 laboratories failed to submit their testing output.

“We would like to remind everybody that the Covid-19 situation in the NCR is still very fragile. It’s not time to be complacent because of the decline in cases,” she said.

“We have to understand that our interzonal borders are very porous and we know that cases are rising in other parts of the country. We must continue to be vigilant and comply with the health protocols to protect ourselves,” she added.

In its case bulletin on Tuesday, the DOH reported 4,479 new infections, 101 additional mortalities and 6,471 new recoveries.

Nine duplicates, including seven recoveries, were removed from the total count while 75 cases that were previously tagged as recoveries were validated to be deaths.

The case fatality rate in the country remained at 1.74 percent for 13 consecutive days.

As recoveries were higher than the new infections, the number of active cases in hospitals and isolation facilities further decreased to 50,037, including the 28 cases that were initially tagged as recoveries but were found to be active cases.

The cases that DOH reports on Tuesdays and Wednesdays are normally low because these were extracted from the reports submitted by the laboratories over the weekend.

Laboratories have until midnight to send their reports to the Covid-19 Document Repository System. The data is extracted by the DOH technical team the next day and validated. The DOH then reports the validated data another day later.

Meanwhile, Vergeire credited the local government units in the NCR and the Metro Manila Development Authority for their concerted effort to bring Covid-19 cases down.

She also lauded the public for adhering to the minimum public health standards and getting the vaccine against Covid-19.

The government has prioritized NCR Plus 8 in the vaccination program. This consists of the NCR, Metro Cebu, Metro Davao, and the provinces of Batangas, Bulacan, Cavite, Laguna, Pampanga and Rizal.

Recently, the government expanded the focus areas to include those experiencing a surge in Covid-19 cases. (Marites Villamor-Ilano / SunStar Philippines)