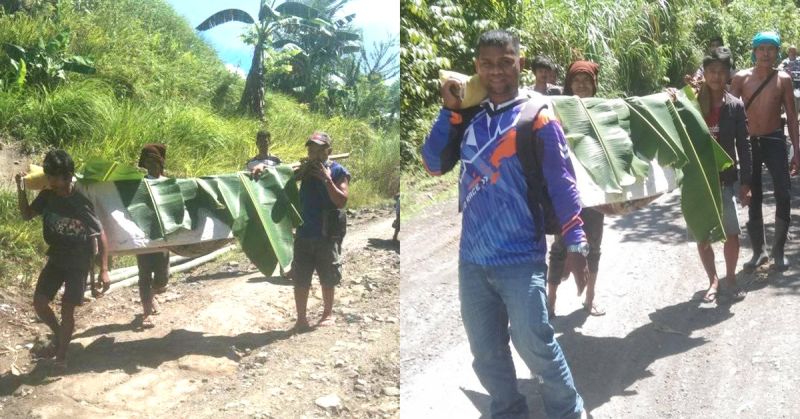 RESIDENTS in Barangay Gumitan, Marilog District, Davao City are asking the City Government to provide emergency response vehicles in their area following a photo of a makeshift mobile ambulance that went viral online.

Efren Mandi posted on his Facebook account photos of residents using a makeshift ambulance-on-foot in transporting the patient to the nearest hospital. They used banana leaves to cover the area where the patient is lying.

Mandi added that they are asking prayers for the patient, who is in critical condition.

He said the patient was transported from Sitio Mahayahay to the main highway, which is 24 kilometers away, because the responding ambulance cannot go to their area.

He ended his post, hoping that they will be given an emergency vehicle, even just a "4x4 multicab" that will be on standby at Sitio Malikongkong in case of medical emergency.

Mandi, meanwhile, told SunStar Davao in a phone interview on Wednesday afternoon, June 30, that the patient that they transported was a six-month pregnant woman who was about to give birth.

“Nagtabang mi kay luya na ang nipas-an mao tong naka-organize ta og pipila ka tao nga mutabang (We volunteered to help because the ones carrying the pregnant women were already tired. So I tapped and organized a team to help in the transport),” he said.

Before the transport of the patient started, Mandi said he was already near the highway calling for rescue.

It took them six hours to transport the patient.

The mother was safely brought to Marilog District Hospital around 1 p.m. Unfortunately, the baby did not make it. The baby got stuck halfway while being she was giving birth. It was stillborn.

Mandi said they have been enduring this difficult situation for many years.

Despite existing road projects from the Department of Public Works and Highways (DPWH), responding to emergency cases can be a challenge because roads are not accessible and they do not have emergency response vehicles.

"Lisod agian og mga sakyanan kay motor ra ang transport sa maong area. Pero lisod sab siya sudlon (Only motorcycles can traverse the area as four-wheel vehicles cannot pass through. It is not easy to get to our area)," he said.

Having an emergency response vehicle in Malikongkong, the central part of Gumitan, has been their long-time dream since they have encountered several circumstances when the patient did not make it to the hospital.

"Last year, naay asawa sa akong ig-agaw, nanganak. Critical to kay namatay to. Wala gyud siya kaabot sa highway kung asa ang 911 pwede makasundo (my relative’s wife who was pregnant died under critical condition. She didn’t make it to the highway where a 911 can pick her up)," he said.

While their area remains “Covid-19-free,” he is also worried that they might encounter the same struggle in the time there is an outbreak in their area.

Mandi said he did not expect that his post would be noticed by the media.

While he is overwhelmed with the support from netizens, he is hoping that his post would serve as a “voice” of their appeal to have an accessible means of medical service.

Mandi also emphasized in his post the bayanihan effort of his team was someone’s answered prayer.

“Ang tinuod nga pag-ampo is kung willing pud ka mahimong katubagan sa ilang pag-ampo pinaagi sa atong ginagmay nga pagtabang. Ug di na nimo mamalayan nga ikaw diay mismo ang nahibong kasulbaran sa ilang kalisod (The real essence of prayer is if you are willing to be someone else’s answered prayer. You might not even notice that you have been the answer to his or her prayer because of your small help),” he said.

SunStar Davao reached out to Davao City Health Office Acting Head Dr. Ashley Lopez for the side of the city on this matter, but he has not responded yet.