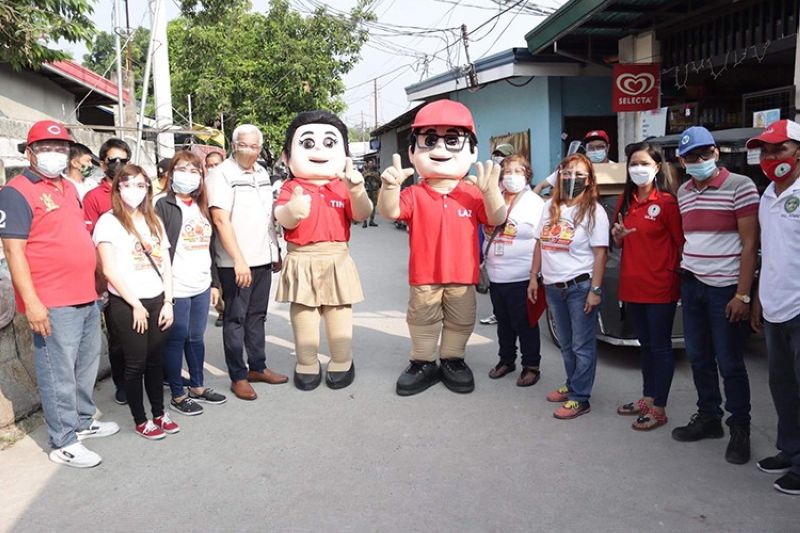 NUTRITION MONTH. One hundred Angeleño kids from Barangay Anunas received Vitamin A and C supplements, as well as deworming from the Angeles City Government via a house-to-house visit by Mayor Carmelo Lazatin Jr. with Gender and Development Officer Mina Cabiles, City Nutrition Office led by Donnatilla Guanzon and mascots Laz and Tin. Nutribuns donated by the Hotels and Restaurants Association in Pampanga were also given to the kids. (Angeles City Information Office)

THE Angeles City Government kicked off on July 1 the Sabayang Patak Vitamin A and deworming campaign for kids aged 7 and below with a twist.

Two mascots, named Laz and Tin, the brainchild of Mayor Carmelo Lazatin Jr., were present to serve as the epitome of "Batang Angeleño malusog at masigla."

During the activity, dubbed as "Wastong Nutrisyon ang Misyon ni Mayor," Vitamin C supplements and nutribuns, which were donated by members of the Hotels and Restaurants Association in Pampanga (Harp) led by president Fatima Orfinada, were also given to Angeleño kids via house-to-house, ensuring that safety and health protocols for Covid-19 were observed.

“The mascots are also our way of conversing with the parents that nutritional supplements being administered and given to kids by our nutrition scholars and health workers with the assistance of our Gender and Development Office are safe and for the betterment of their health,” Lazatin said.

One hundred kids from Barangay Anunas had already received their Vitamin A and C supplements, deworming, and nutribuns Thursday, July 1. The city is targeting 12,297 kids in its 33 barangays. The schedule for the 32 barangays will follow suit.

Lazatin said this project, which he had implemented since he took office, has been one of his priority missions for Angeleño kids -- to end the fight against nutritional deficiencies and at the same time promote an immunized community.

In July 2019, Lazatin provided free vitamin supplements and deworming vaccines to more than 4,000 children in the city.

The City Government also carried a house-to-house distribution of milk in 33 barangays from April until May, where more than 52,000 kids received milk assistance.

Lazatin said it is the primary aim of his administration to promote children’s welfare.

"The monitoring of the welfare of Angeleños will not just start or stop during July, also known as Nutrition month," he said.