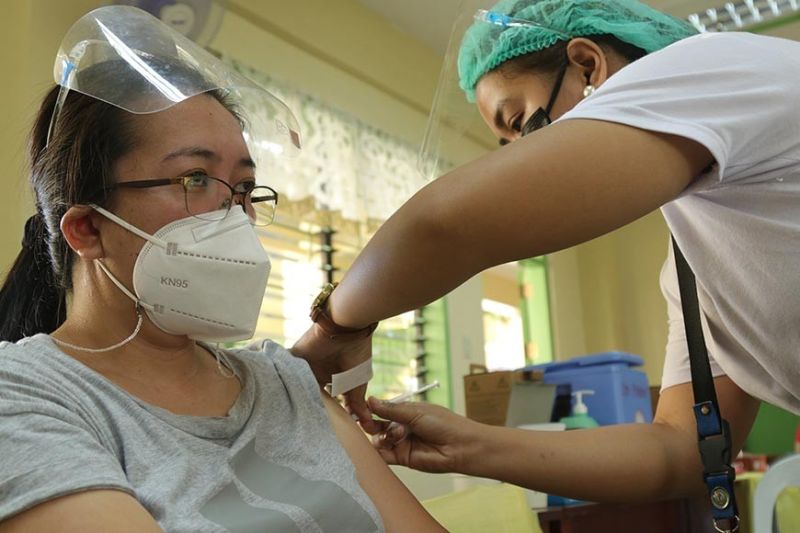 "It's doing very well, and we are happy about it," Duterte-Carpio told the media in an ambush interview on Saturday afternoon, July 3, during the vaccine rollout at the Mintal Comprehensive High School.

According to the Davao City Vaccination Cluster, as of June 30, a total of 257,253 doses were already administered, of which 211,425 administered for the first dose and 45,828 on the second dose.

This comprises the Priority Groups A1 (health care workers), A2 (senior citizens), A3 (persons with comorbidities), A4 (essential workers), and A5 (indigent population).

Duterte-Carpio said the city can further expand its rollout once more doses arrive in the coming weeks.

(What is important is the vaccines are being rolled out at our vaccine clusters and the strategies of Davao City are being highlighted.)

Various essential workers from different sectors under A4 received their Covid-19 vaccines over the weekend. The city government targeted to vaccinate more than 20,000 workers under the A4 group during this time.

The mayor said the city's vaccination on the Priority A4 group is on "sectoral vaccination."

"Kung organized 'yung grupo, binibigay namin sa kanila ang (If the group organized themselves, we can give them the) responsibility to run a vaccine center," she said.

With the expanded vaccine rollout due to ample supply, Duterte-Carpio said the city has currently reached its target to vaccinate 10,000 individuals per day.

The mayor is hoping that more vaccines will arrive so that the city can continuously roll out more doses to Dabawenyos.

Duterte-Carpio said the city is targeting to achieve herd immunity by November this year.

Villafuerte said the city's pacing in the vaccine rollout is "faster" now that the rollout of the vaccines has been simultaneously vaccinated to all priority groups.

Villafuerte, however, said there are still some individuals on the upper priority groups that have not yet been inoculated.

The vaccine cluster head said they are confident to reach the estimated 1.2 million targeted herd immunity on or before the end of the year as long as supplies will constantly arrive in the city.