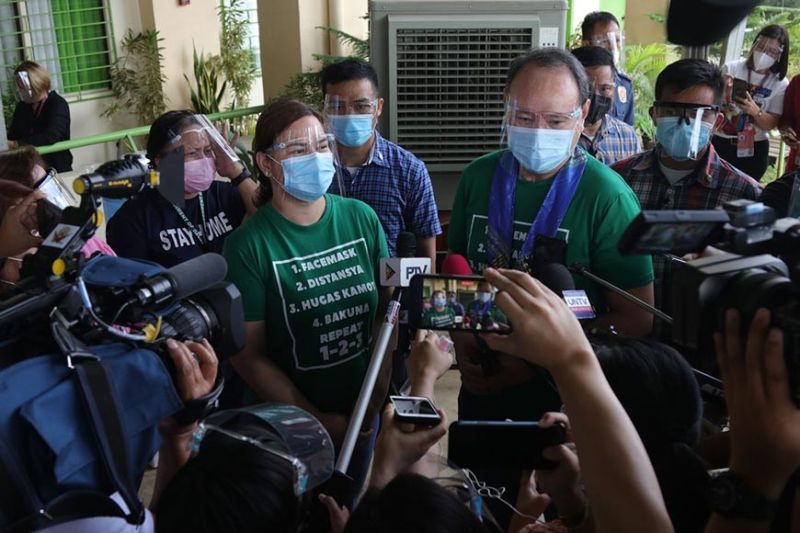 FORMER defense secretary and 2010 presidential candidate Gilbert “Gibo” Teodoro denied that his recent travel to Davao City to get his second dose of the Covid-19 vaccine was politics-related.

Before receiving his second dose, Teodoro and Duterte-Carpio faced the media. The mayor admitted that Teodoro did not plan on getting his first shot in the city.

Teodoro thanked the city for accommodating him in their vaccine rollout.

Teodoro, a resident of Tarlac, received his controversial first dose on June 3 at the Davao City Hall after he personally met Davao City Mayor Sara Z. Duterte-Carpio. Many criticized the former presidential candidate for “jumping the line.” The Department of Health (DOH) said there are no geographic limits in getting the vaccine, but it asked DOH-Davao to explain how Teodoro was administered the vaccine.

DOH-Davao Director Annabelle Yumang also reiterated Vergeire’s statement, adding that Teodoro was eligible to receive the vaccine in the city.

Meanwhile, Teodoro declined to comment on speculations that his trip to Davao City was politically motivated.

"Let's not... There's a time for politics. It's not this time now," Teodoro said.

There have been talks that his presence in the city may be an indication that he and Duterte-Carpio will be running in Tandem in the upcoming 2022 elections.

"I've [come] here to support the public vaccination program of the whole government, particularly the City Government of Davao. It would be really tragic if another interpretation is given sa pagpunta ko dito (in my visit to the city). And there is a solid message here na magpabakuna tayo. Let us trust our public health system. That is the overarching message, which is more important than anything else," Teodoro added.

Duterte-Carpio admitted that she is saddened that some are saying that it was "political maneuvering.” She said what they really want to give attention to is the vaccination campaign and encourage more Dabawenyos to get vaccinated.

She is hoping more big national personalities will come and help inform residents of Davao City about the vaccine.

Meanwhile, Teodoro agreed with supporters of Duterte-Carpio that she is qualified to succeed President Rodrigo R. Duterte. However, despite the clamor for the mayor to run, Teodoro said Duterte-Carpio is currently focusing on her job as mayor of the city, especially in addressing the pandemic.

When asked if he will be running for the upcoming elections, Teodoro said it is "too early to tell."

Duterte-Carpio also declined to comment on their possible tandem.

(No comment. We are here... What is important is that Sir Gibo is here. Because if not for his presence, you wouldn’t be here [media]. Our ongoing vaccination rollout will not be highlighted. We really wanted to highlight our vaccination rollout. This is what the entire country needs right now.)

Meanwhile, Duterte-Carpio also declined to comment about Hugpong ng Pagbabago (HNP) gibing her until end of July to decide on her 2022 plans.

The mayor also said she is not concerned with the possible attacks thrown against her if she does announce her political plans as early as now.