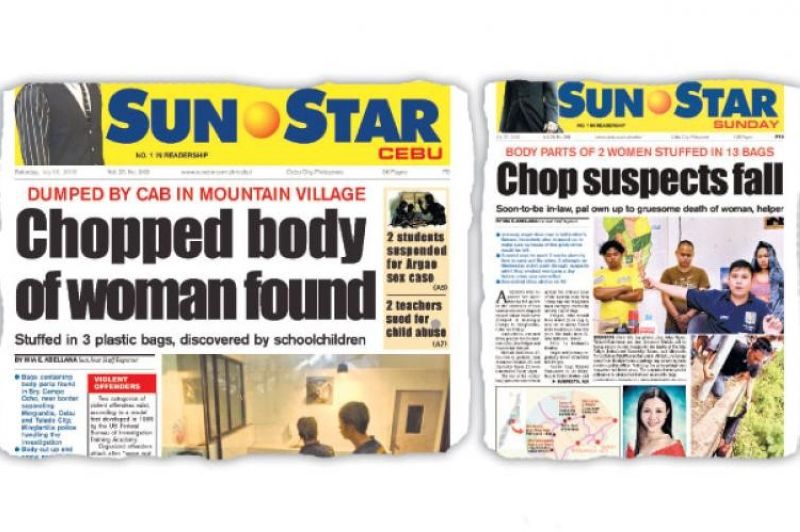 MINIMIZE HARM. Journalists are essential for eradicating from language and culture misperceptions and prejudices that reduce the complexities of persons and trigger discrimination, intolerance and hatred. (SunStar file)

THE “chop-chop lady” exists unlike some news tropes, such as the White Lady haunting motorists that makes her usual reappearance in time for Halloween and All Souls’ Day.

On July 4, a Google search on the key phrase “chop-chop woman” yielded 95 million results in 0.69 seconds.

The first page of this search yielded news articles and YouTube pseudo-documentaries, all tackling “chop-chop ladies” in the Philippines.

The earliest reference to this news trope was made in reportage on the 1967 murder of a Pampanga native who migrated to Manila and whose body parts were found in different places in Manila.

Thanks to journalism and the Internet, her ignominy is neverending. She and other female victims of crime lumped under the news category of “chop-chop ladies” are defenseless against the continued use of a tag created by journalese to satisfy the news values for headlines and page 1 top stories.

Recently, the filing by the Mandaue City Prosecutor of a case of parricide against a husband for the killing of his wife should have been a positive development in the search for justice for a victim of domestic violence.

A woman’s body, minus the head and limbs, was found dumped in a sack in Cebu and Mandaue in October 2020. The investigation leading to the indictment for parricide last May 4 and arrest in Argao last July 1 reassures the victim’s family and other citizens that law and justice are at work.

What mars these developments is the resurfacing of the trope as the victim is referred to in some reports as the “chop-chop wife.”

A trope is a figurative expression used to represent a subject in ways that, at its benign, compresses and erases the complexity of a subject; and at its worst, triggers sexism, intolerance and hate.

Parricide, or the crime of killing a relative, already involves domestic abuse and trauma, particularly when children or minors are involved as victims or survivors. The violence perpetrated by the accused is magnified by the violence carried out against the victim’s reputation and other family members by an insensitive, dehumanizing headline moniker.

Years after the crime, were the children whose father murdered their mother to Google-search, they would find, worse than skeletons in the closet, a sordid narrative that paints the victim also as a creature deserving her brutalization in death and on the news.

Reportage on “chop-chop ladies” frequently resorts to sensationalized “true crime” techniques that scrutinize minutely the life of the victim, framing a judgment that the victim’s “sordid past” triggered a “sordid crime.”

Journalists should cover crimes committed against women without resorting to tropes, such as “chop-chop wife.” Aside from dehumanizing victims and traumatizing families, this insidiously hostile form of gender stereotyping feeds a culture of misogyny.

Gender-based violence has its roots in power inequalities and gender stereotyping, which normalize that which is violative of a person’s dignity and self-worth.

Article 5 of the Convention on the Elimination of all Forms of Discrimination Against Women underscores that, “States Parties shall take all appropriate measures... to modify the social and cultural patterns of conduct of men and women, with a view to achieving the elimination of prejudices and customary and all other practices which are based on the idea of the inferiority or the superiority of either of the sexes or on stereotyped roles for men and women.”

Using language with sensitivity, journalists, broadcasters, netizens, and other communicators should discern with scalpel precision the differences in the use of “chop” as a verb and in a sexist epithet.

Knowing the distinctions is crucial for the safety and well-being of girls and women.