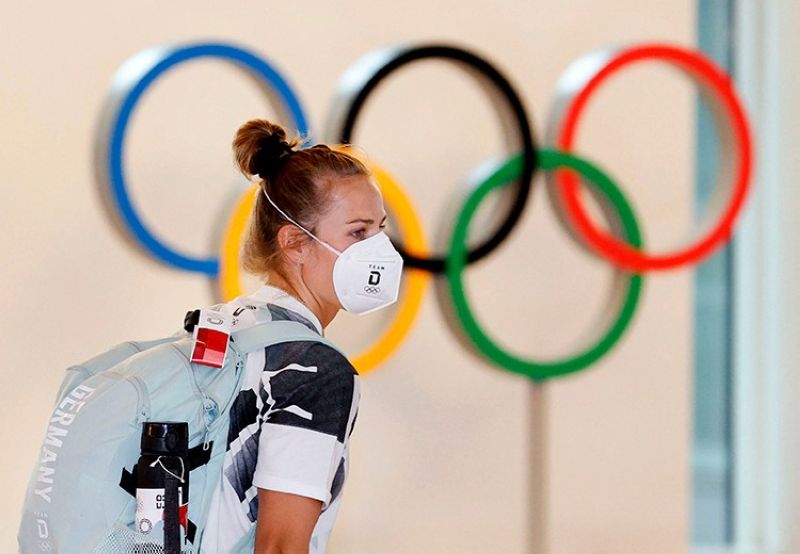 TOKYO -- The pressure of hosting an Olympics during a still-active pandemic is beginning to show in Japan.

The games begin July 23, with organizers determined they will go on, even with a reduced number of spectators or possibly none at all. While Japan has made remarkable progress to vaccinate its population against Covid-19, the drive is losing steam because of supply shortages.

With tens of thousands of visitors coming to a country that is only 13.8 percent fully vaccinated, gaps in border controls have emerged, highlighted by the discovery of infections among the newly arrived team from Uganda, with positive tests for the highly contagious delta variant.

As cases grow in Tokyo, so have fears that the games will spread the virus.

“We must stay on high alert,” Prime Minister Yoshihide Suga told reporters on July 1. Noting the rising caseloads, he said “having no spectators is a possibility.”

“It’s not that we are determined to have spectators regardless of the situation,” Hashimoto said Friday.

Organizers, the International Olympic Committee and others are expected to meet this week to announce new restrictions because of the fast-changing coronavirus situation.

Amid the criticism, Suga went to Tokyo’s Haneda international airport June 28 to inspect virus testing for arrivals. He vowed to ensure appropriate border controls as a growing number of Olympic and Paralympic athletes, officials and media begin entering Japan for the games.

On Monday, Tokyo confirmed 342 new cases, the 16th straight day of an increase. On Saturday, the capital reported 716 cases, highest in five weeks.

At a meeting of government advisers, experts warned of the possibility of infections exploding during the games, projecting daily caseloads exceeding 1,000. They said that would severely strain health care systems. In a worst-case scenario, there could be thousands of infections a day, causing hospitals to overflow, they said.

Ryuji Wakita, director-general of the National Institute of Infectious Diseases and the head of a government Covid-19 advisory board, urged tighter border controls to detect and isolate infected arrivals at airports to prevent infections from spreading from Tokyo to the suburbs.

In a case that has shocked many in Japan, a member of the Ugandan team tested positive upon arrival June 19 at Narita International Airport and was quarantined there. The rest of the nine-member team was allowed to travel more than 500 kilometers (300 miles) on a chartered bus to their pre-Olympics camp in the western prefecture of Osaka.

Days later, a second member of the team from East Africa tested positive for the virus, forcing seven town officials and drivers who had close contact with them to self-isolate. The team itself is isolating at a hotel. Health officials said both infected Ugandans had the delta variant.

On Saturday, an athlete from Serbia also tested positive, causing the cancelation of his team's training in the central city of Nanto. The government also has acknowledged that four other people arriving for the Olympics tested positive after entering the country earlier this year.

“There will be more people coming in. ... We should use this as a lesson so that similar problems won't be repeated elsewhere in Japan,” Osaka Gov. Hirofumi Yoshimura told a recent regional governors’ meeting where leaders adopted an urgent request for tighter border controls.

Under revised guidelines on health measures sent to 530 municipalities hosting Olympic training, airport officials will isolate an entire group if any member tests positive, and they will stay at designated facilities until the athletes' village opens July 12. Hosting towns can request guests to stop training and isolate themselves until they clear contact tracing and virus tests.

Dozens of municipalities in Japan have canceled their hosting arrangements because of virus worries, and many of them decided to use those facilities as vaccination sites.

In Tokyo, infections are spreading among the young and middle-aged who are largely unvaccinated. The more serious cases requiring hospitalization are gradually replacing the elderly, 26 percent of whom are now fully vaccinated, according to experts.

Japan's fully vaccinated rate of 13.8 percent is slightly above the world average of 11.3 percent but low compared with 47.4 percent in the United States and 49.5 percent in the UK, according to the US Centers for Disease Control and Prevention and Our World in Data.

Adding to the worries is uncertainty about Japan's vaccination campaign.

Workplace inoculations began in mid-June, with thousands of companies applying to vaccinate employees. But the government then indefinitely halted taking new applications for workplace and large-scale vaccination sites due to tight vaccine supplies.

“The progress exceeded our expectations,” said vaccinations minister Taro Kono, noting that daily shots have likely reached 1.2 million or more. He said Japan will receive only one-third of the Pfizer-BioNTechPfizer vaccine supply it had hoped to receive by late July.

“Confusion is spreading across Japan,” because of this slowdown, said Kamon Iizumi, the Tokushima governor who also heads the National Governors’ Association.

A vaccination center in Kagawa had to suspend shots for 30,000 people, and plans were put on hold for 6,500 companies in Gifu, in central Japan. Other areas including Osaka, Kobe and parts of Tokyo also were forced to suspend planned vaccinations from this week.

“What a disappintment,” said Yukio Takano, head of Tokyo's Toshima district. “We have worked so hard to accelerate the rollouts and now we have to put on the brakes. ... What was the rush for?"

Japan began vaccinating medical workers in mid-February and the elderly in mid-April. Despite initial delays due to bungled reservations and shortages, the pace picked up in mid-May when vaccine imports stabilized and staff was secured to meet a primary target of fully vaccinating all 36 million elderly by the end of July.

Suga set up military-run mass vaccination centers in late May and added workplace and college campus venues to accelerate the progress.

On June 21, Japan eased its third state of emergency to less-stringent measures that focused on shorter operating hours at bars and restaurants in Tokyo and other metro areas until July 11.

Experts suggest, however, that a resurgence might require another emergency declaration during the Olympics. If so, organizers may have to reconsider their current limit of 10,000 people or 50 percent capacity at venues to perhaps barring all spectators.

Kengo Sakurada, president of Sompo Holdings and the head of an influential business lobby, said on June 30 that the current vaccination rate is not enough to hold a safe Olympics.

He said he supports having no spectators for events because the damage from a worse outbreak would be far greater.