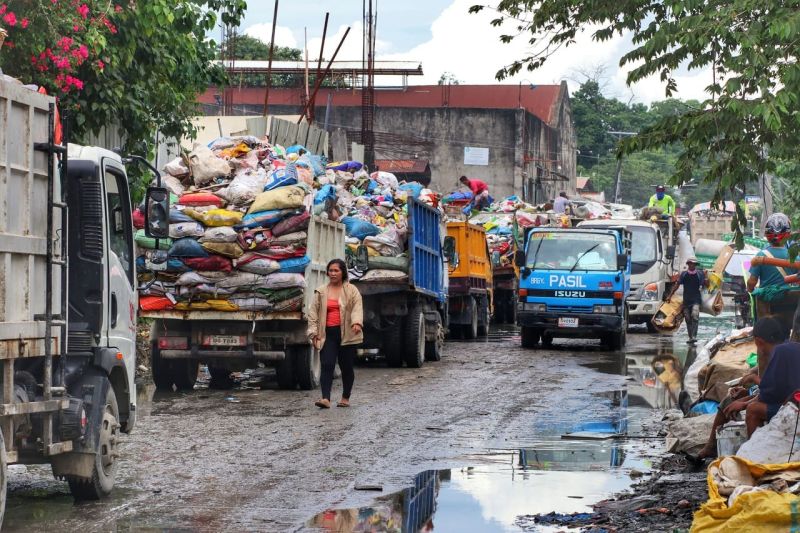 GAS ALLOCATION In this July 6, 2021 file foto, garbage trucks, including those operated by barangays in Cebu City, form a long queue at the Inayawan Transfer Station awaiting their turn to dispose of the garbage they had collected. Scenes like this will not be seen for a time following a cease and desist order issued by the Environmental Management Bureau (EMB) 7 against the City’s private contractor in charge of the transfer station effectively shutting down the facility. To dispose of collected garbage, Cebu City barangays will now have to directly dump their waste in a sanitary landfill in Barangay Binaliw in the north district. The Cebu City Government said it will provide gas allocations for south district barangays to cover the longer trip. / SunStar file

ALL 34 barangays in Cebu City’s south district will be given an additional gas allocation of 200 liters per month for each of their garbage trucks to cover the distance of traveling all the way up to Barangay Binaliw in the north district to dispose of garbage.

The move comes in the wake of the temporary shutdown of the garbage transfer station in Brgy. Inayawan ordered by the Department of Environment and Natural Resources’ Environmental Management Bureau (EMB) on Wednesday, July 7, 2021.

The EMB Central Visayas served a cease and desist order against RMI Solid Waste Management and Hauling Services, effectively shutting down the Inayawan waste transfer station, where a 10.8-meter-high pile of trash has accumulated.

RMI, which operates the transfer station, was given 15 days to pay a fine of P105,000 for violating conditions 2 and 3 of its environmental compliance certificate (ECC), which was issued in 2017.

A cease and desist order was also served by the EMB to the City’s private contractor, Docast Construction, directing it to stop accepting wastes and to immediately dispose of the trash it has collected at the sanitary landfill in Brgy. Binaliw, instead of bringing this to Inayawan.

Due to the EMB orders, Cebu City Administrator Floro Casas Jr. said all barangays in the city will have to dispose of their garbage directly, preferably in the sanitary landfill in Binaliw.

The directive prompted south district barangay captains to air their concerns in a meeting on Thursday morning, July 8, with the Local Disaster Risk Reduction and Management Office (LDRRMO) headed by Ramil Ayuman.

Among their concerns was that more fuel would be needed for the trucks to transport garbage all the way up to the northern barangay of Binaliw.

“The mayor assured us that we should not worry because our system is in place from garbage collection to disposal,” Casas said in a mix of Cebuano and English.

“Rest assured that our city will not be dirty because of the closure of our transfer station in Inayawan,” Casas added.

Meanwhile, Maratas said while the DGS will start with a 200 liters per month increase for each of the south barangay garbage truck, this may be subject to change depending on the actual situation.

Currently, Cebu City’s fuel allocation for each of its 80 barangays range between 300 to 400 liters per month.

Casas said the village chiefs also expressed concern that the long distance will affect the usual turn around time of their garbage collection and disposal considering that it will take longer for the garbage trucks to travel to Binaliw.

Barangays in the south district will be clustered so that they can assist each other when there are uncollected garbage left.

A total of 23 trucks, both from the DPS and Docast Construction, will also be deployed to augment the barangay garbage trucks.

Dacua said a group chat on Facebook will be created for a faster relay of information and requests from the different barangays.

Councilor David Tumulak, committee on disaster risk reduction and management chairman, said the extraction of garbage from the Inayawan transfer station is now ongoing and there would be no need to declare a state of calamity.

He said the declaration of a state of emergency or state of calamity was “imminent.”

Rama said he will have the matter “seriously” discussed in Cebu City Council.

Docast has 50 garbage trucks including those operated by its sub-contractor.