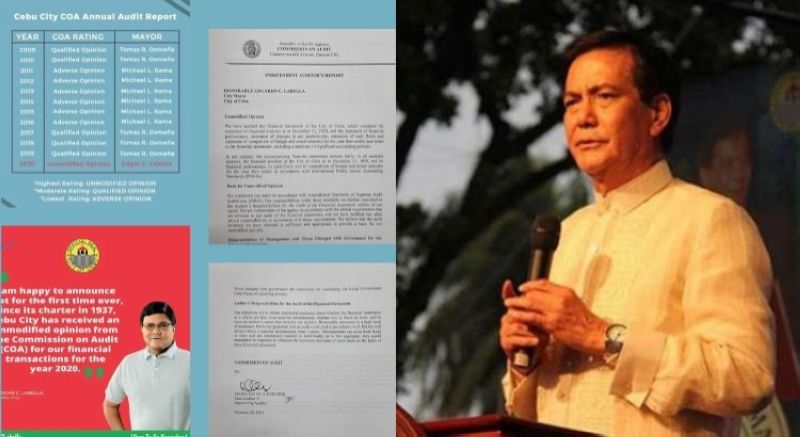 THE Labella camp, which has been whiplashed both directly and obliquely by the opposition and other critics for failing to report to the Cebu City Council and the public its 2020 spending against the coronavirus pandemic, is celebrating.

A Commission on Audit (COA) “independent report” -- signed by Maria Daisy O. Bercede, state auditor V and supervising auditor, and addressed to Mayor Edgardo Labella –- said the financial statements submitted by the City “present fairly, in all material respects” the city’s financial standing and performance “in accordance with the

There is “basis for our unmodified opinion,” said COA. It is unqualified opinion, without qualification, what experts on auditing call “a clean report”: no “adverse comment or disclaimer about any clause or audit process.” The auditors giving a clean report, experts say, believe the audited entity’s operations “are in good compliance.”

WHAT IT SAYS, DOESN’T SAY. The five-paragraph letter talks about the basis for its “unmodified opinion,” responsibilities of city managers and those who govern, and the auditor’s responsibilities.

It does not say that all the transactions of the City in 2020 were wise and prudent and free of any irregularity. It only says the City complied with the standards of reporting.

However critics may quibble though, the fact is the rating is much better and far higher than that of the administrations of Tomas Osmena in 2016 and Mike Rama in 2010 and 2013.

An explanatory line at the bottom of the graphic says “unmodified opinion” is highest rating, “qualified opinion” is moderate, and “adverse opinion” is lowest rating. Thus, Mike Rama got the lowest ratings among the three mayors. The wrinkle: Rama is now Labella’s vice mayor and a Partido Barug colleague who may not have yet dumped totally his plan to run for mayor in the next election.

The comparison, of course, makes Labella’s rating of “unqualified opinion” stand out more and shine brighter than a solitary report would.

TIMING OF RELEASE. The COA letter that contains the “remark”/opinion is dated, mark it, February 28, 2021. Even with slow mail, by last mid-March it must have already been on the mayor’s table and before the eyes of his aides on finance, notably city manager Casas, Councilor Raymond Alvin Garcia, chairman of the Sanggunian committee on finance, and key adviser ex-councilor Jose Daluz III.

In the City Council’s March 17 session, BOPK’s Councilor Franklyn Ong was complaining that the treasurer’s report on the P2.5 billion spending for anti-Covid response didn’t give enough information. He wanted “details on the breakdown on the spending and where the goods – rice, packed lunch, sardines, medical supplies -- went.” Minority Floorleader Nestor Archival said he would like to know the prices, at least on foodstuff and he wanted COA to know the Sanggunian had not reviewed the prices. The City Council decided to ask for additional information from the treasurer but rejected, 9-7, Archival’s motion to inform COA about its role in the purchase or in any review of prices.

Earlier, Councilor Garcia gave a breakdown of the P2.5 billion appropriated by the Sanggunian in three tranches: P1.1 billion to buy rice and canned goods, P431 million for medical supplies, and P392 million for salaries and hazard pay of health workers. Councilor Ong in the March 17 session provided the information that P240 million was spent for packed lunches. [Bzzzzz: Cebu City Council wants more information on P2.5B spending in 2020, March 17, 2021]

At the time, the COA rating must have already been known by Mayor Labella’s close colleagues. Yet they waited until last week, or more than five months later, to release the report, in Facebook posts.

THINGS TO WATCH: (1) Whether the City Council will close the chapter on the P2.5 billion anti-Covid money and accept COA’s initial report on the city’s financial reporting. It has still many unfinished tasks but it had repeatedly, as a body, asked for that specific information and had been consistently frustrated.

(2) How the vice mayor will take the public disclosure of Rama’s COA rating when he was mayor, which can be as heavily speculated on as his response to the earlier sacking of his supporter Raddy Diola as Local School Board mayor’s rep.

Still, any of that cannot obscure the “happy event” for the often-beleaguered Mayor Labella camp during the first two years of its virgin term.