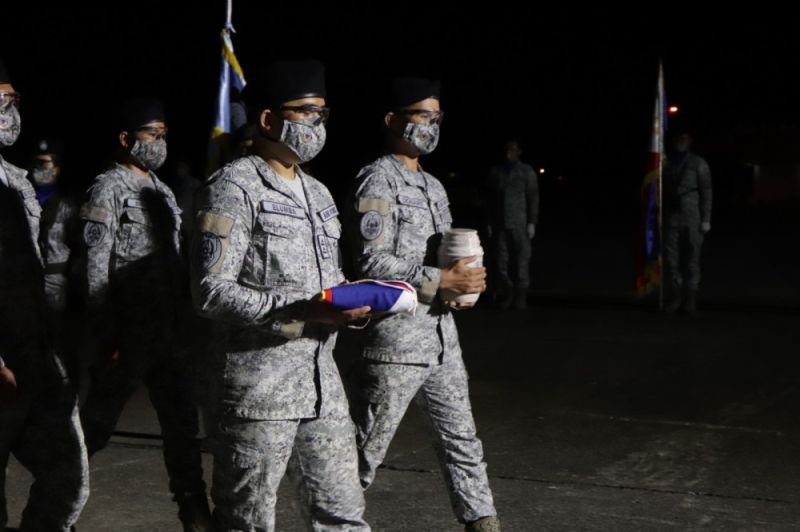 THE remains of the co-pilot of the ill-fated C-130 aircraft, which crashed in Barangay Bangkal, Patikul, Sulu, has returned to his hometown in Davao City on Saturday evening, July 10, 2021.

In a press release issued by Toweastmin, Daisy Hintay, mother of the fallen pilot, was carrying the urn of her beloved son as she walked out of the NC212i aircraft of the PAF.

The remains of the young pilot were cremated in Mactan, Cebu on morning of the same date prior to his arrival in Davao City and were brought to Naval Forces Eastern Mindanao, Camp Panacan for a three-day wake.

Hintay graduated as a PAF military pilot at PAF Flying School on October 26, 2018 then was assigned to the 220th Airlift Wing.

"He was described by his colleagues and friends as a happy, smiley, and a very approachable person," Toweastmin said.

Toweastmin also "grieves the untimely passing of the promising young pilot, a beloved comrade and extends its heartfelt condolences to the bereaved family and friends of Hintay."

The Davao City government earlier issued a statement that the local government will fly the flag at half-mast from July 5 to July 9, 2021, in honor of the soldiers who died after a PAF C130 transport plane crash-landed in Sulu on Sunday, July 4.

In another statement, the Panabo City government offered its condolences to the family of Hintay, whom they considered as a Panaboan.

"We grieve for the loss of a young hero from Panabo City. May the Lord God give his family strength, comfort, and peace during this difficult time," the Panabo government said.

The city government also extended its condolences to another Panaboan, Private Archie Barba, who was also among those who did not survive the recent plane crash.

As of Sunday evening, Barba's remains have not yet returned to his hometown.

Her body was accompanied by her family.

The remains were brought to St. Peter Funeral Homes at Ecoland, Davao City for the wake immediately after arrival.

In a text message to SunStar Davao, Retired Colonel Wilfredo Barrera Tato, 70, father of Sheena, said PAF officials visited her daughter's wake to bestow an honorary medal for her service to the military.

Sheena graduated with a Bachelor of Science in Nursing at the Brokenshire College in Davao City back in 2011.

Brokenshire also extended its condolences to the family.

Hintay, Barba, and Sheena were among the 50 people killed in the air crash in Sulu's Patikul town.

An investigation is still ongoing to determine the cause of the plane crash.