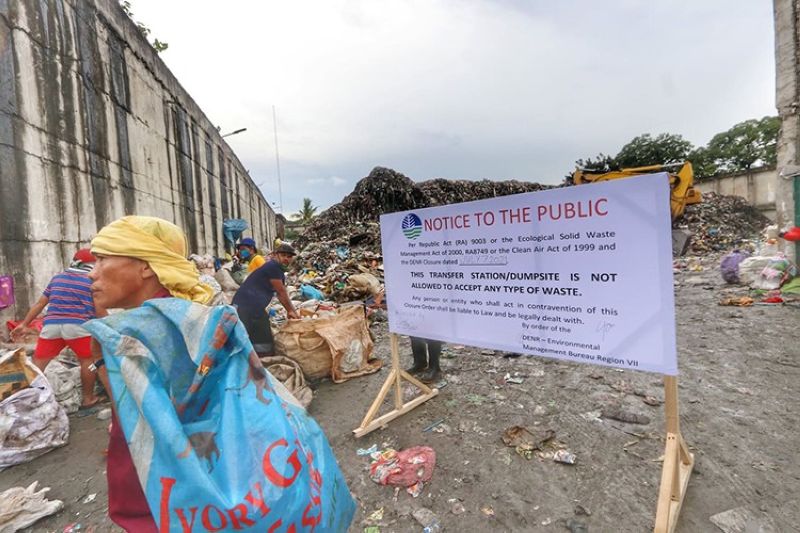 THE closure of the transfer station in Barangay Inayawan, Cebu City has forced barangays in the south district to dispose of their garbage in the sanitary landfill in Barangay Binaliw in the north district.

The Department of Environment and Natural Resources - Environmental Management Bureau 7 had ordered the temporary closure of the facility after it cited some environmental violations.

Punta Princesa Barangay Captain Eleno Andales Jr. said the turnaround of their garbage collection was changed due to the distance to Binaliw, which is a mountain barangay.

The three rounds of collection have been reduced to one, he said.

He is more worried about the garbage trucks’ condition, saying the cost of repairs and replacement of parts is more expensive.

Kinasang-an Barangay Captain Susan Enriquez said dumping the garbage in Binaliw is an inconvenience because it is far.

Both Andales and Enriquez also worry about the depletion of their respective fuel allocation.

Calamba Barangay Captain Victor Quijano Jr.’s problem is that their garbage truck cannot make the trip to Binaliw because of the road condition there.

Quijano said he requested for an additional garbage truck from the City Hall, which was approved by the City Council two years ago, but the truck have yet to be delivered.

San Nicolas Proper Barangay Captain Clifford Niñal said his barangay’s garbage collection will certainly be affected if the transfer station in Inayawan will not reopen soon.

He said they only have one garbage truck because their other dump truck is broken. Uncollected garbage will surely cause a stench, he said.

He said their main problem is the distance to the sanitary landfill in Binaliw.

Cogon Pardo Barangay Captain Harry Eran said they’ve been able to adapt to the changes, but he expects problems to arise in the coming days.

Once uncollected garbage builds up in the interior, “that is where our problem starts,” he said.

The Department of Public Services (DPS) and the City’s private contractor deploy garbage trucks to collect garbage along main roads, but barangays are still in charge of collecting garbage in their interior portions.

Eran said their garbage truck has some defects so he is worried that it might not be able to make the climb to the landfill.

Some barangay captains, though, have implemented measures to mitigate the effects of the transfer station’s temporary closure.

Inayawan Barangay Captain Kirk Bryan Repollo said they expect the mini dumptruck the barangay purchased to be delivered this month.

Repollo said this will help them collect garbage in the barangay’s interiors.

He also gave credit to members of the barangay’s garbage team who volunteered to extend their working hours.

In a previous interview, DPS Chief John Jigo Dacua said around 700 tons of garbage are collected in the city every day.