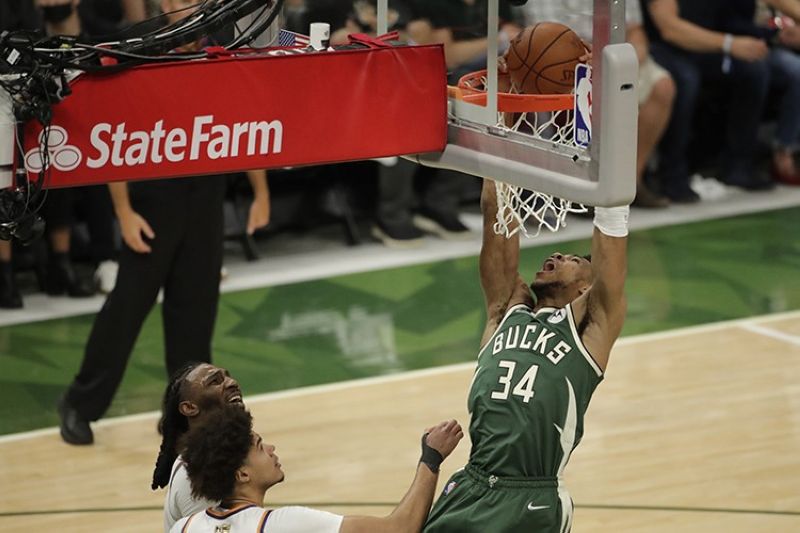 Milwaukee Bucks' Giannis Antetokounmpo (34) dunks during the second half of Game 3 of basketball's NBA Finals against the Phoenix Suns, Sunday, July 11, 2021, in Milwaukee. (AP Photo/Aaron Gash)

MILWAUKEE — Giannis Antetokounmpo and the Bucks made the NBA Finals' return to Milwaukee a slamming success.

The way the Greek Freak is going, the party might just be getting started.

Antetokounmpo had 41 points, 13 rebounds and six assists, and the Bucks pounded Phoenix 120-100 on Sunday night, cutting the Suns' lead to 2-1.

The first NBA Finals game in Milwaukee since 1974 went to the home team in a romp, with Antetokounmpo and the bigger Bucks overwhelming the smallish Suns to the tune of a 20-2 advantage in second-chance points.

Game 4 is Wednesday night, with the series guaranteed to go back to Phoenix afterward.

Antetokounmpo, who missed the last two games of the Eastern Conference finals because of a hyperextended left knee and was no sure thing to even be ready to start this series, followed up his 42-point, 12-rebound performance in Game 2 by doing it all again — even making his free throws this time.

Back in front of his own fans and free of the loud counts he's been hearing on the road, Antetokounmpo went 13 of 17 at the line.

Chris Paul had 19 points and nine assists, but the Suns got next to nothing from his star backcourt mate. Devin Booker shot 3 for 14, scoring just 10 points. (AP)