Duterte to daughter Sara: Run some other time 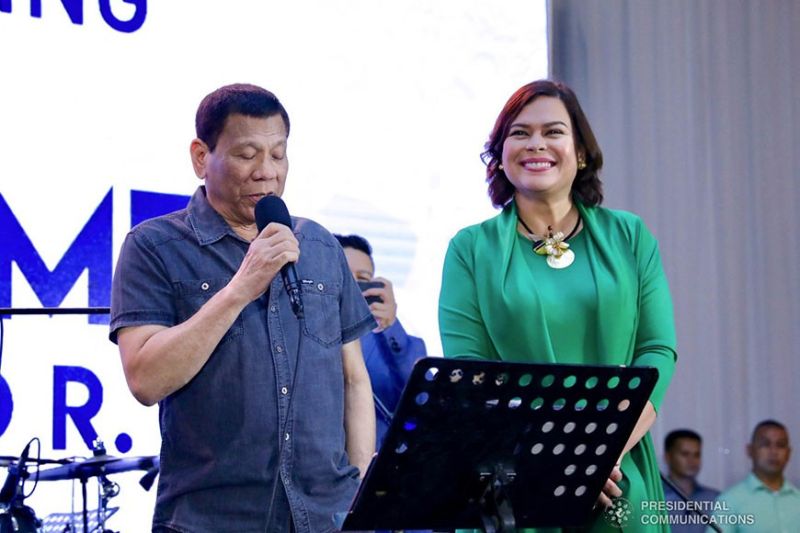 This came days after Duterte-Carpio told the Cebu press during her visit at the Cebu Provincial Capitol on Friday, July 9, for a courtesy call with Governor Gwendolyn Garcia, that she is “open” to the idea of running for the presidency in next year’s national elections.

The Davao City mayor said on Monday, July 12, that she is still weighing the public’s pulse on her possible presidential bid in 2022.

In his Talk to the Nation on Monday evening, July 12, Duterte remained firm in his opposition against his daughter's candidacy to the national position.

When Presidential Spokesperson Harry Roque asked him about his comment on Duterte-Carpio’s recent pronouncement, the President said, "Open lang naman... Open lang (She only said that she is open). That is all there is to it.”

He added, “My stand is I am against really the candidacy of my daughter. I want her spared from... the vagaries of politics dito sa Pilipinas (here in the Philippines).”

The President also spoke against his critics, former Senator Antonio Trillanes IV and Senator Leila de Lima, whom he said had done nothing but make tirades.

He said he would rather see them win rather than seeing his daughter hurt at the end of the “disrespectful” comments of critics.

"Gusto ko sila na lang muna (I want them to run for now). Run at some other time, huwag ngayon kasi wala kang maano dito, mabastos ka lang. (Not today because you will only be disrespected.) It’s not good for a -- a woman to be, you know, being -- brazen niyong masyadong mga salita at masaktan lang (These harsh words as you would end up getting hurt). So as a father, I would not want that to happen to my daughter," Duterte said.

Meanwhile, he said his vice presidential bid, which he said he was considering, was only meant to scare off his political opponents.

"Ako naman ‘yung vice president ko pantakot lang sa kanila ‘yan. But sabi ko (My statement on possibly running as vice president was only meant to scare them) let us see if it is -- kaya ako (for me), if it is good for the country, I will do it. If it does not contribute anything to our Republic, then huwag na lang, magsasayang lang tayo ng oras pati (never mind as I might waste your time and) you contribute to the conundrum of the moment," the President said.

Duterte has been vocal against his daughter running for the presidency in his many public appearances and TV interviews.

Duterte-Carpio said that her father and mother, Elizabeth Zimmerman, have already discussed her political plans in 2022.

“Yes, dunay discussion but ang discussion is limited sa tulo lang kabuok tao. Sa akong mother, father ug ako. Three times na mi nag-istorya (there has been a discussion but it is only limited to three people -- me, my mother, and my father),” the mayor said.

Duterte is set to end his term in June 2022. Meanwhile, he is also set to deliver his sixth and final State of the Nation Address (Sona) on July 26.

Duterte-Carpio already said she and her mother will skip this year.

Duterte’s sons Paolo and Sebastian have not yet issued any statement if they will join the event or not.