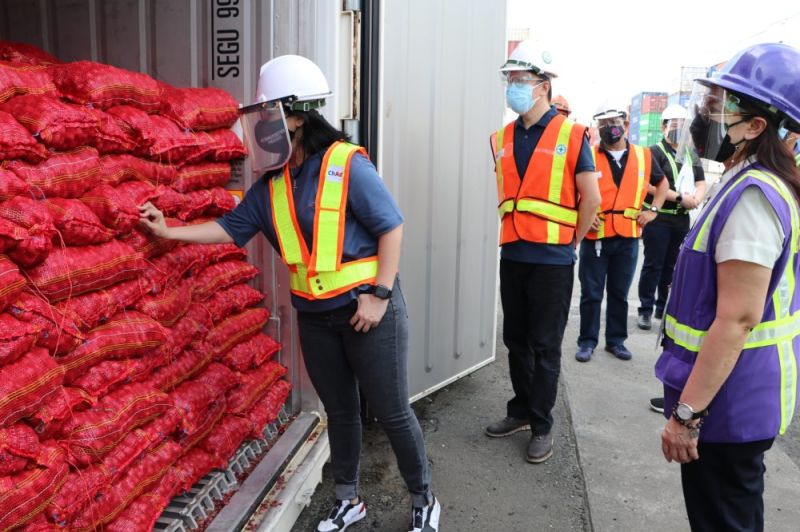 SUBIC Bay Metropolitan Authority (SBMA) Chairman Eisma has proposed to the Bureau of Customs (BOC) in the Port of Subic that the allegedly smuggled onions that were seized on July 12 be donated to the poor, or charity institutions instead of just being destroyed under the law.

The BOC seized on Monday 12 container vans loaded with fresh onions with an estimated market value of P24 million.

Subic Customs collector Marites Martin said the cargo arrived in Subic from China and were consigned to two port users: Thousand Sunny, which was to receive three containers, and Dua Te Mira, which was to get nine.

The manifest, however, indicated that the contents of the 40-footer refrigerated container vans were frozen chapati bread, or flat Indian bread.

Martin said the BOC decided to declare the cargos abandoned after nobody claimed them or presented proof of ownership for all or part of the shipment.

The BOC said each of the 12 refrigerated vans contained hundreds of sacks of fresh red onions with estimated market value of P2 million each van.

Expressing regret upon learning that the seized cargo may end up being destroyed under the law, Esima said: “In this time of the pandemic when many already lost their jobs, and more have nothing to cook, it’s really a waste if these products will just be destroyed. I hope we could find ways that they could somehow benefit the needy.”

Martin and Muñoz, in response, assured the SBMA chairman that if it is allowable by law, they would recommend that the confiscated onions be donated instead.

Meanwhile, the BOC is said to be conducting follow-up operations on the mis-declared shipment. During the inspection at the New Container Terminal in Clark Freeport on Monday, July 12, five units of containerized vans were opened in the presence of Martin, SBMA Chairman and Administrator Wilma Eisma, Department of Trade and Industry Assistant Secretary Ronnel Abrenica, and Department of Environment and Natural Resources field inspector Tom Muñoz.

One of the containers was equipped with a global positioning system (GPS) tracking device, which the BOC said is used to track the container’s current location.

Martin said this was the first time they discovered a GPS tracking devise being placed in a container van.