EXPLAINER: 7 questions you must've wanted to ask about COA's 'clean' rating of Cebu City Government and findings in its audit of 2020 spending. The answers we have so far. 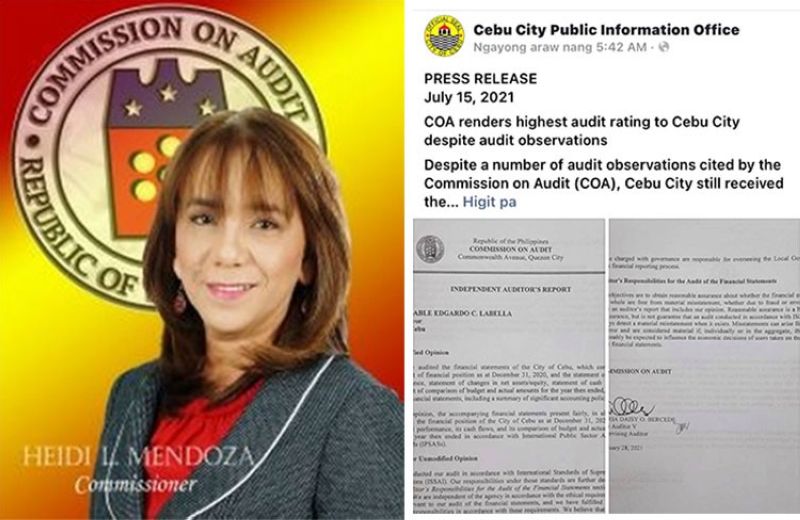 [a] Cebu City Mayor in a July 11 message said he was "happy to announce" that COA (Commission on Audit) has given the City Government an "unmodified" or "unqualified" opinion for its 2020 financial transactions. It was the "highest rating" the LGU ever received in its history, Labella's besting past administrations of Tomas Osmeña and Michael Rama.

[b] Mayor Labella said the rating showed that the City "strictly followed the processes of governing, especially on spending taxes." The COA letter of February 28 said the financial statements "present fairly, in all material respects, the financial position of the city... financial performance, its cash flows, and its comparison budget and actual amounts" for the year 2020.

[c] City officials' spin of it as a clean bill of health for the LGU's transactions last year, the year of the pandemic, was seized quickly by critics of the Labella administration, accusing it of mis-informing the public about its spending.

WHAT WAS CLEAR when City Hall broke the news:

[a] The COA letter giving the LGU an "unmodified" or "clean" opinion was authentic and not disputed; the event that set off the "joyous" occasion was real.

[b] The mayor and City Hall's information/propaganda machinery gave a spin or interpretation favorable to City Hall, namely, the City was recognized for following government regulations tightly ("hugot nga gituman") and its spending was "all above-board." Critics seized that claim to charge the Labella administration with lying when the full report came out and there were transactions that COA flagged.

SOURCE. For the questions readers must have wanted to ask, the independent source is Heidi Macaraan Lloce-Mendoza, whose insight on the local issue Innopub's Max Limpag was able to tap. Mendoza posted her thoughts in a Facebook post.

Heidi Mendoza of Tayabas, Quezon was commissioner and officer-in-charge of COA from 2011 to 2015. A former undersecretary general for the United Nations Office of Internal Oversight, her credentials include the tag of "staunch advocate of good governance and development." She also served as external auditor of Food and Agriculture Organization, World Health Organization and International Labor Organization.

WHAT WE KNOW. [1] What exactly did Cebu City get when COA gave it an "unmodified opinion" on the city's 2020 financial transactions? What is a COA opinion and what is not?

Mendoza says and audit opinion is not a rating. Before the opinion is given, she says, COA undertakes a financial and compliance audit, which seeks to find out if the reported cash is correct, the LGU owns it or not, and receivables are valid and subsisting and whether the law and rules on cash spending are followed.

Her answer to Max Limpag does not say but this must be what the COA letter to Mayor Labella means when it says the LGU's financial papers "fairly represent, in all material aspects" the 2020 financial picture of the City Government. The opinion was about the results of its financial and compliance audit.

[2] Did Cebu City's "unmodified" or "clean" opinion from COA mean there were no irregularities in its 2020 spending?

No, Mendoza says, "To obtain a 'clean' opinion is not a proof that there are no irregularities."

The audit report is not just the COA opinion or remark contained in one or two pages of a letter to the mayor. The rest of the full audit report on Cebu City is more than 250 pages, which COA posted on its website.

A reading of the audit report cannot be limited to the opinion or remark from the supervising auditor.

Aside from the "financial and compliance audit," Mendoza says, there are other audits COA conducts, each with a purpose or objective, such as the "fraud audit," to find out if cheating and other irregularities were committed, or the "procurement audit," to see if regulations on purchases of goods or services were followed.

[3] Since Cebu City already received an "unmodified" or "unqualified" opinion from COA, can it be said that the errors or violations by the LGU, as listed in the findings, have already been corrected and thus the "clean" opinion?

[4] How does COA certify to the corrections by the LGU, following the sequence in audit procedure?

In City Hall's July 15 press release, amid the controversy on the true nature of an "unmodified opinion," City Administrator Floro Casas Jr. said the COA observations were "already satisfactorily remedied and answered." That means, City Hall explained and even acted on the findings.

If that is true, if City Hall's explanations and remedies were accepted, the audit observations are removed, Mendoza says, from the report. If Cebu City was given the "clean" opinion but there are still findings that accompany the audit report, they remain in the report, including the accountability of the officials concerned.

To settle the question, look at the report again and check out the response of COA to the explanation and the claimed corrections. The "clean' opinion is not enough.

[5] Did the mayor and other officials fabricate or lie about the "unmodified" or "clean" opinion?

COA indeed sent a letter dated February 28 to Cebu City, as it did to other LGUs such as Makati City, Ilocos Norte, and Liloan, Cebu. The "award" of unqualified opinion was no concoction or fabrication.

The point of dispute apparently rests on how the Cebu City officials interpreted the opinion. They thought that the "clean" opinion meant that COA found all its 2020 transactions "above board." Mayor Labella's response to the news must have been prompted by information and advice of key staffers. And City Administrator Casas and the P.I.O., as recently as last Thursday, July 15, still pushed that line with the argument that the "clean" opinion means City Hall's explanation and corrections were already accepted by COA. (It does not, as Mendoza explains.)

It would be rash, if not stupid, if they knowingly spun the wrong interpretation, since the facts of audit could be checked out and belied.

[6] Was it wrong for LGUs, such as Cebu City and Liloan town, to claim a victory from the "clean opinion"? Are COA observations flagging certain projects and some transactions automatic proof of irregularity?

No, it wasn't undeserved; the honor must have been hard-earned. Compliance with COA requirements and other government rules is no easy task, given the record of past mayors, in Cebu City particularly, who fared poorly or even flunked (with grades from qualified to adverse).

And a project or transaction being flagged by COA does not automatically make it irregular or anomalous. The LGU is not accused of wrongdoing, yet. It can still explain and make corrections. COA findings are not yet the evidence of a crime but they can lead to its exposure.

[7] Did media err in breaking the story without verifying for its readers what "unmodified" or "clean" opinion from COA meant?

Two news stories (one after the other, July 8 and 10) in Cebu's two newspapers do not constitute the full local media coverage, unless one counts only SunStar and Freeman as the Cebu media and the two stories were the sole basis.

One or two days of output don't constitute total coverage of a running story, which moves and evolves after Day 1. With digital carriers of news, deadline cycles keep turning, giving the news outlets a chance to correct the wrong or deficient report, playing catch-up, as some editors put it.

The ideal was to explain immediately what "opinion" or "remark" means, from where COA sits, but the agency is not exactly known for being open or chatty. The full report came out on its website a week or more after the story broke. The papers and other media had to publish the sourced claim of City Hall, knowing that a follow-up story could correct an error by the source.

SunStar's note of caution, through an Explainer, came out two days after the paper printed a City Hall press release about the COA opinion. This explanatory story comes out five days after the first Explainer on the issue and eight days after the mayor glowed over the achievement.

News outlets were prudent in not immediately using leaked material that had no legitimate source on which to hang. They waited until the full report was published in COA's website and additional information became available.