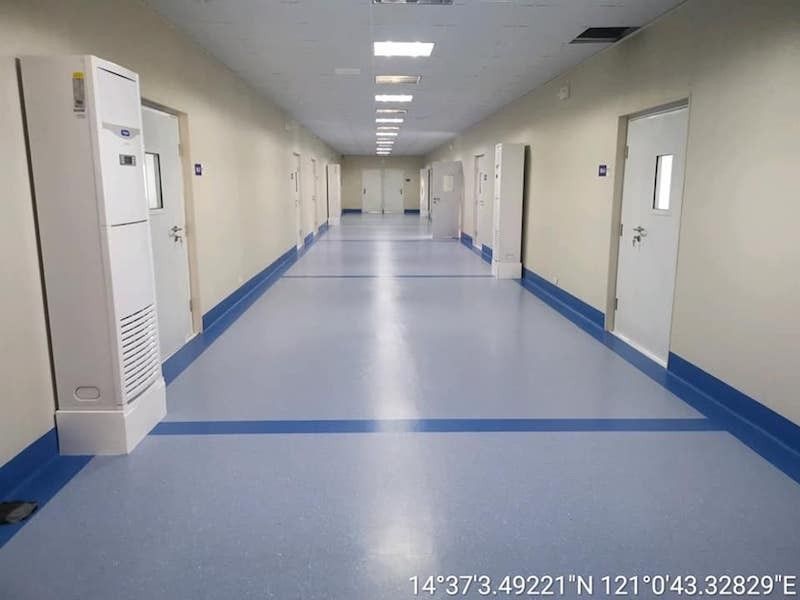 MANILA. The modular hospital at the Quezon Institute has 110 beds for Covid-19 patients. (From PTV)

(UPDATED) With the detection of the first local cases of the Delta variant, the government went on emergency mode and activated the second half of a four-door strategy to ensure that measures are in place nationwide to address and immediately contain a possible surge in coronavirus disease 2019 (Covid-19) cases.

Secretary Carlito Galvez Jr., chief implementer of the National Task Force (NTF) Against Covid-19, said Friday, July 16, 2021, that the country is “well-prepared” for a possible surge in infections such as what happened in India and Indonesia.

Galvez said hospitals have been given funds to stock up on medicines, modular hospitals with at least 110 beds each have been constructed, a mega hospital with 336 beds has been built in Metro Manila, and the One Hospital Command has been activated.

The plan now is to set up a command center at the PICC to put all task forces related to pandemic response under one roof.

He also said the 3.2 million doses of the single-dose Janssen (J&J) viral vector vaccine that are expected to arrive on Monday will go to so-called “areas of interest” such as Northern Mindanao, National Capital Region and Western Visayas.

The 11 local cases of the Delta variant were detected in these three regions. Six were in Northern Mindanao, three in NCR and two in Western Visayas.

Priority will be given to group A2, or senior citizens, and other vulnerable sectors, he added.

Department of Health (DOH) Undersecretary Maria Rosario Vergeire said they held an emergency meeting with all regional units to activate the last two strategies in a four-door strategy against Covid-19.

“With our four-door strategy, we have delayed the entry of this Delta variant with the activation of Door 1 and Door 2. Now that we have detected additional cases of Delta variant, and because they are local cases, we are now activating Doors 3 and 4,” she said.

Door 1 is the imposition of travel bans and restrictions to prevent entry of cases while Door 2 refers to screening, quarantine and testing at ports of entry to contain cases that have entered the country.

Door 3 means there is already an outbreak in the country and all local government units (LGUs) must strengthen the PDITR (prevent, detect, isolate, treat and reintegrate) strategy to prevent further transmission.

Door 4 is the imposition of community quarantines to contain the spread and prevent the health system from becoming overwhelmed.

As of Friday, she said granular lockdowns would be the primary strategy since the cases are sporadic.

“Our primary strategy for now would be granular lockdowns. But if we see that an area has a surge and the Delta variant has been detected in that area, we will be recommending a stricter (quarantine) classification for that area,” Vergeire said.

But on the same day, Malacañang announced that Iloilo Province, Iloilo City, Cagayan de Oro City and Gingoog City were placed on enhanced community quarantine (ECQ) until end of July 2021.

Vergeire said all DOH regional units and LGUs have been directed to ensure that all cases are appropriately traced and managed.

She said that by the time a patient is found positive for the virus, the LGU should have already conducted contact tracing.

LGUs are also urged to do back tracing, up to the third generation of close contacts.

The Bureau of Quarantine and the Department of Transportation are both on high alert to implement stricter border control measures.

Department of the Interior and Local Government (DILG) Undersecretary Epimaco Densing III said he met earlier Friday with governors, mayors and the regional IATFs, particularly in Western Visayas which he described as a “region of concern.”

He said the existence of the variant in Iloilo City and Iloilo Province may be the reason for the continued rise in cases despite the modified enhanced community quarantine (MECQ) in the two LGUs.

Monitoring of cases has been intensified, and LGUs in Western Visayas have been directed to improve contact tracing efforts and increase public awareness about the variant.

The same directives have been given to LGUs in Northern Mindanao and NCR, he said.

Although Covid-19 transmission is being controlled by vaccination, Vergeire said it is still being driven by the variants of concern, increased social mobility and inappropriate use of public health measures.

“Even while we are vaccinating our Filipino people, minimum public health measures such as physical distancing, face masks and face shields should not be neglected,” she added.

Galvez said the total number of doses administered in the country breached four million on July 14 and daily inoculations reached a new high of 391,283 on July 15.

A fully vaccinated individual is one who has received both doses of a two-dose Covid-19 vaccine or the single-dose vaccine.

The fully vaccinated individuals constitute around 5.2 percent of 77,746,906, the new government target to achieve herd immunity based on 70 percent of the Philippine population.

Galvez reported to President Rodrigo Duterte on July 12, 2021 that the United Nations had listed the country's population at 111,067,008.

To achieve its target, the government aims to ramp up vaccinations to at least 500,000 a day. (Marites Villamor-Ilano / Third Anne Peralta-Malonzo)