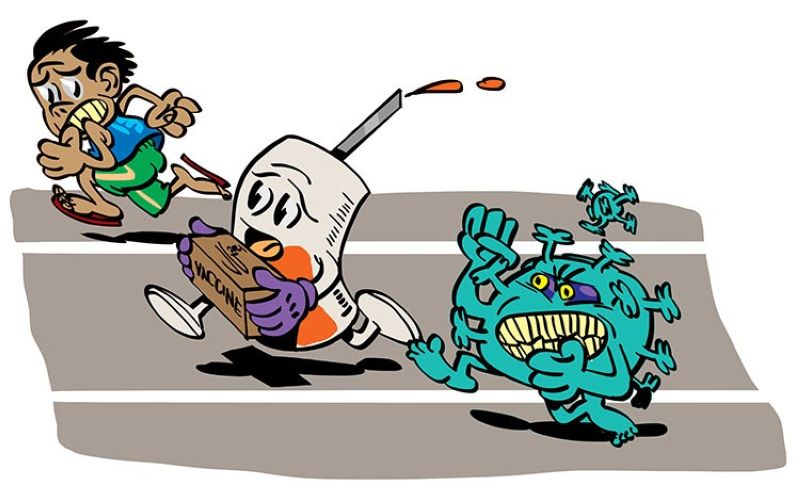 FOR some parts of the world, it has become a race between the arrival of vaccines against coronavirus disease 2019 (Covid-19) and the development of new variants of the disease.

More so in the neighboring country of Indonesia, which is currently experiencing a massive spike in Covid-19 infections and deaths with the introduction of the faster-spreading delta variant.

On Thursday, July 15, 2021, it logged more than 56,000 new cases. But the number doesn’t reveal the whole picture because, like here in the Philippines, too few people get tested.

And yet, despite the grim outlook, the Indonesian government has not resorted to imposing lockdowns and has chosen instead to keep its economy open.

Sowmya Kadandale, health chief in Indonesia of Unicef, which is in charge of distributing vaccines through the UN-backed Covax mechanism, found this development encouraging and hoped that the country would be able to stop the climb in Covid-19 cases by implementing aggressive vaccination.

In the Philippines, which has 160 million fewer people than Indonesia, the Department of Health recorded just a little over 5,000 new cases on Thursday.

The country is expected to receive over 10 million doses of different Covid-19 vaccine brands this month alone.

In the coming weeks, the problem will not be the availability of vaccines but convincing more members of the public, especially those who are vulnerable to infection, to get the jab.

In Mandaue City, August Lizer Malate, head of the City’s Emergency Operations Center, admitted that only 21 percent of senior citizens who are registered in the master list for vaccination have been vaccinated.

The Philippines is not the only country in the region to encounter a large proportion of its population who do not want to get injected. Vaccine hesitancy is also prevalent in Indonesia, where questions about the potential use of pork products in the manufacture of vaccines have hampered the vaccination campaign in the Muslim majority nation.

With the slow flow of vaccine doses from around the world finally picking up speed, the race is now to convince enough people in the Philippines and Indonesia to get vaccinated against Covid-19 so both countries can finally achieve herd immunity and move on and rebuild their devastated economies.