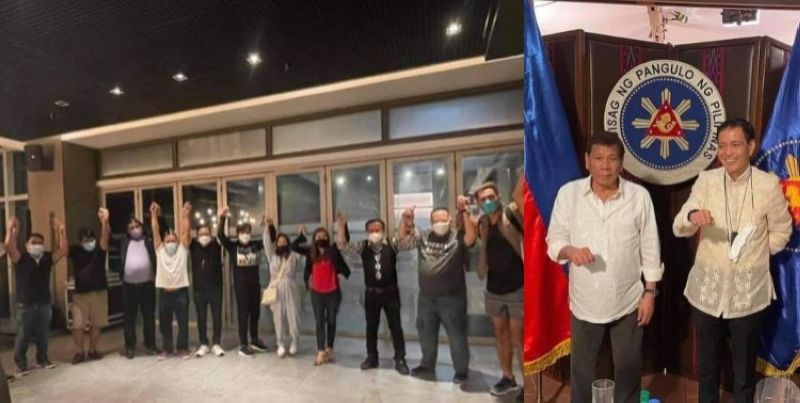 WHAT WE KNOW. A meeting of leaders of three allied local parties – Partido Barug and newly revived Kusug and Pundok Kauswagan – with the national party PDP-Laban agreed Friday night, July 16 to field these candidates in the 2022 elections:

Vice Mayor Michael Rama for mayor; Councilor Raymond Alvin Garcia for vice mayor; and Councilor Prisca Nina Mabatid for the House seat in the north district. The other known aspirant, TV star Richard Yap, who ran and lost in 2019 under Barug, may run as an independent. The party’s candidate for the south district may go to Councilor Edu Rama or Councilor Dondon Hontiveros, as each could not yet agree as to who’d give way to the other. As to who will fill the slots for councilors, eight in each district, will be picked later.

No official statement was yet released, as of this story’s posting, by BKK (Barug, Kusug, Kauswagan). But Councilor Mabatid posted past 3 p.m. Saturday, July 17 on her Facebook page photos of Cebu officials identified with the three local parties, holding aloft one another’s arms, the usual pose of politicians on a campaign stance or in a victory celebration. The biggest of four photos on her FB page showed City Council Majority Floorleader Raymond Alvin Garcia, Presidential Assistant for the Visayas Michael Dino and Councilor Mabatid. Another photo showed those who attended in a victorious pose.

As cryptic as it is, it tells that Barug had already “officially” picked its candidates for the next elections. Mabatid could not be contacted as she had reportedly gone to Manila but another source gave some key points of the event at the capital.

From Kons Mabatid’s “Thank you Lord” in her FB post, one could safely guess she is the candidate for the city’s first district. That was confirmed later by the other Bzzzzz source.

Whatever decisions made between now and the first week of October could still be changed, since the certificate of candidacy (COC) is what binds. But the decision Friday night among BKK leaders was official and final, for now.

If VM Rama didn’t write the caption himself, the one who did used his language. Note “change,” “together we can make things happen,” and “kaulohan” (for capital, which only older people use).

WHAT THEY DISCUSSED. In his personal FB account on the same day, July 14, Mike separately posted another photo of himself and the president talking to each other, with three smaller photos, including the one he used for the VM office account. His comment on the photos: In the evening of Tuesday, July 13 “I met President Rodrigo Duterte and we had a discussion and exchange of insights regarding the country & Cebu City. Executive Secretary Salvador Medialdia, Sen. Bong Go, & PNR General Manager Jun Magno were also present. – Mike.” The tagline tells us he himself wrote that.

Clearly, a lot of things had changed since August 7, 2016 when President Duterte named Rama one of the country’s “drug protectors,” along with several politicians, judges and police officials. On March 14, 2019, just before the elections, Duterte no longer included Mike’s name in the “narco list” that he read on national TV.

The day before last week’s Malacanang visit, his July 12 post was about his meeting “a few days ago” with Davao City Mayor Sara Duterte-Carpio, who last said in Cebu City she was “open” to running for president.

Less than a year before the next elections, VM Rama apparently is now chummy with the Dutertes, father and daughter.

NO POLITICS? GET OUT. They must have discussed it. It was most likely the reason for Mike Rama’s presence in Malacanang. For obvious reasons, neither Mike nor anyone from the Palace was publicly talking about politics. Everyone else though was free to speculate.

Broadcaster Elias O. Baquero, in a Friday, July 16 FB post, said his “reliable source in Malacanang” said the president’s and his daughter Sara’s “official candidate for mayor in Cebu City” is, you guess it, Vice Mayor Rama. (And “the VP candidate,” EOB said, is “Gibo Teodoro.”) Having said that, Baquero rhetorically asked, “What transpired at the meeting? Secret (u)sa.” A secret but not for long.

Comelec still has to issue the rules on election advertising. But even if it had, the rules would not apply to anyone as no one is yet considered a candidate: filing of certificates is on the first week of October and the campaign period would still be far away.

How would Facebook’s recording and disclosure of ads help? It is part of what they call election transparency, a concession to the growing resentment against “foreign meddling.” It would also be interesting to watch, as, for example, the spending by rival politicians Rep. Paz Radaza and Mayor Junard “Ahong” Chan in Lapu-Lapu City.

Innopub’s Max Limpag notes that Radaza has been outspending Chan in Facebook: Paz’s P43,800 against Ahong’s P5,500 for the period from June 14 to July 13.

EARLY SPENDERS. Last May 12, 2021, a Rappler story listed early spenders on Facebook ads, who started more than a year before the May 2022 elections.

Topped by reelectionist Senator Sherwin Gatchalian (P4.5 million), former senator Antonio Trillanes IV who might run for president (more than one million pesos), the ad spenders used the platform, as of last May, for eight months already.