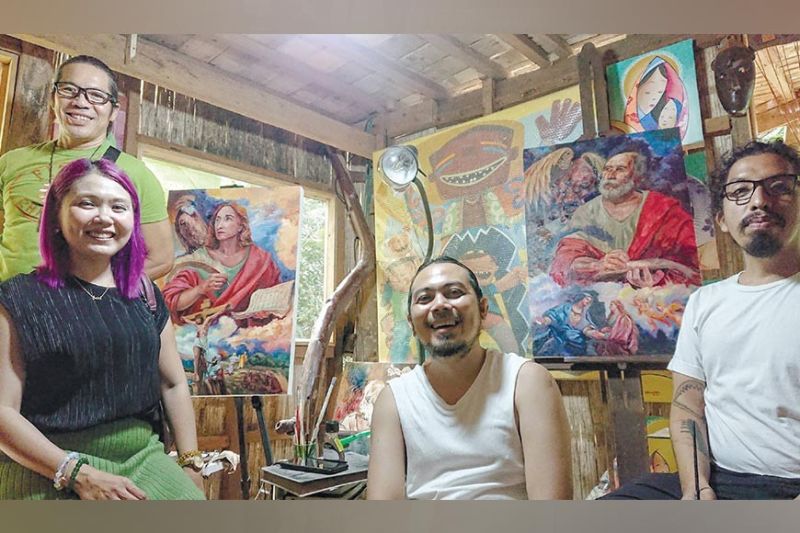 THE COLLABORATORS. (From left) Fr. Joselito Danao, interior designer April Escasiñas and painters Pierre Famador and Shielo Duterte have embarked on a collaborative mosaic art project for the Archdiocesan Shrine of the Immaculate Heart of Mary in Minglanilla, Cebu. / MICHELLE SO 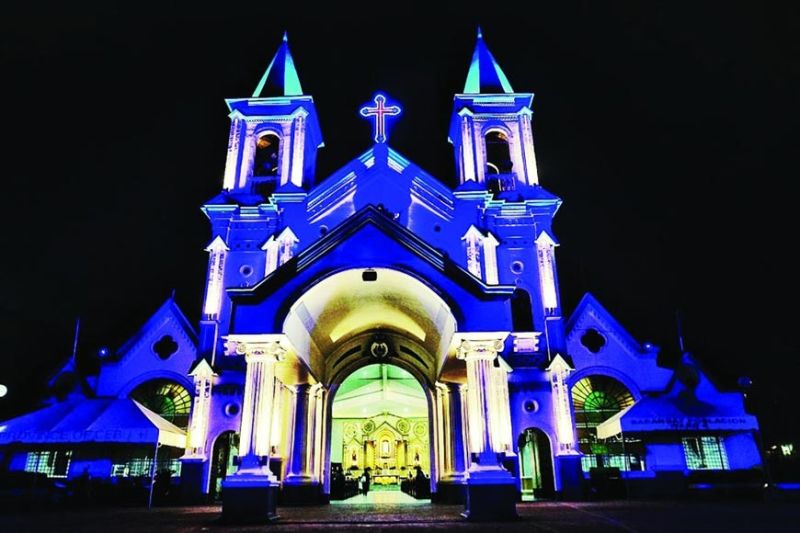 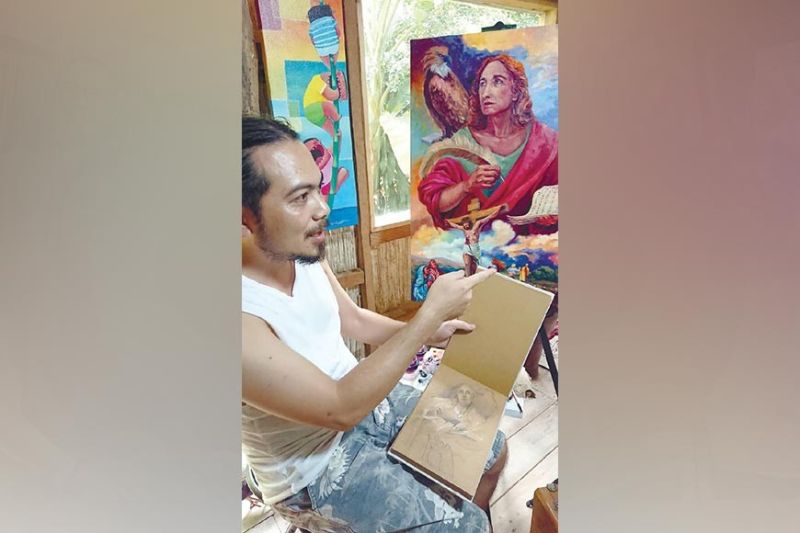 THE DRAFT. Pierre Famador shows the drafts of his drawings to be rendered into oil paintings. / MICHELLE SO 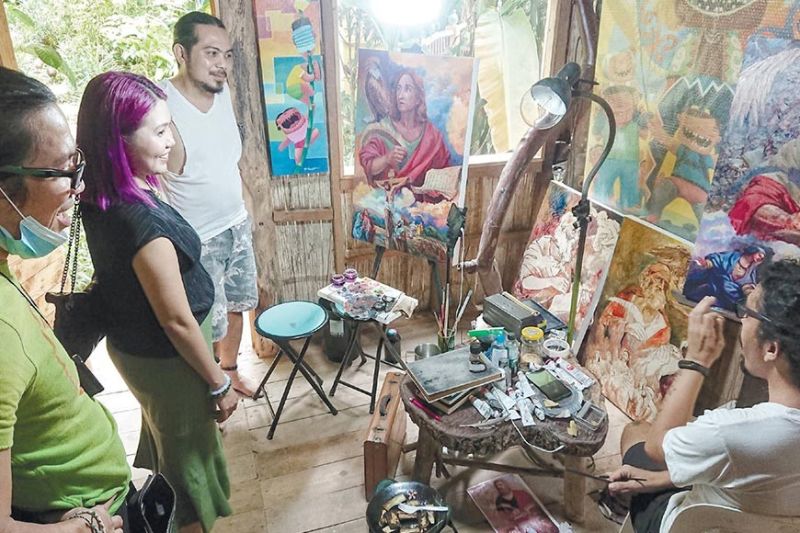 THE DISCUSSION. The collaborators talk shop. / MICHELLE SO 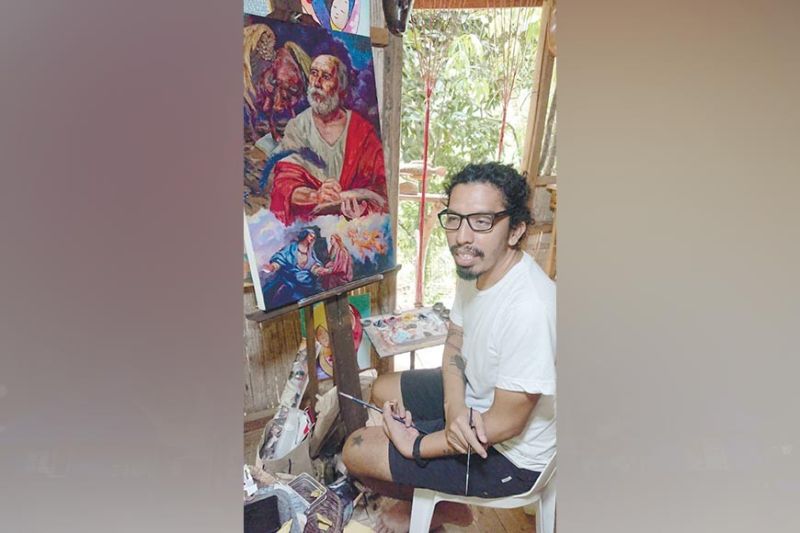 THE PORTRAITS. Shielo Duterte adds details to the image of St. Luke. / MICHELLE SO 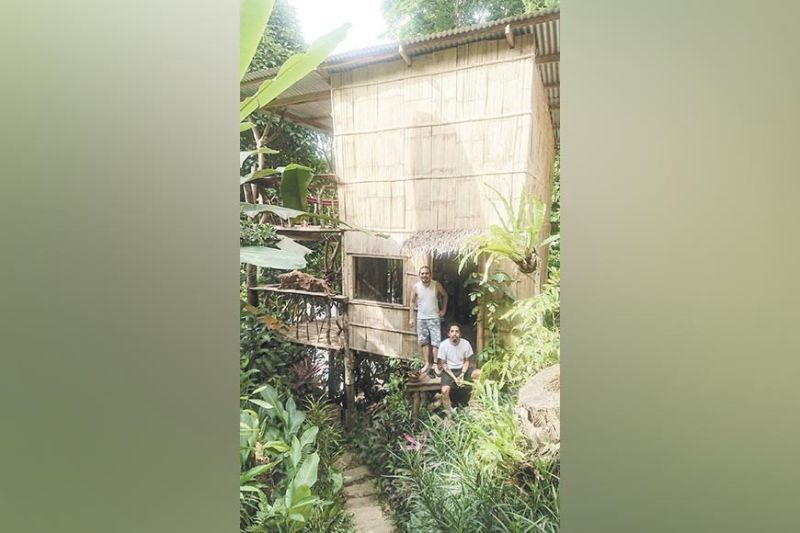 THE STUDIO. Pierre Famador and Shielo Duterte do their work at Famador’s cute studio in Barangay Busay, Cebu City. / MICHELLE SO

PAINTERS Shielo Duterte and Pierre Famador have rendered the images of the four Evangelists of the Gospel for the famed Dibuho Kisame of the Parish of Saints Peter and Paul in Bantayan.

But commissioned again to paint the Fab Four for an art installation at the Archdiocesan Shrine of the Immaculate Heart of Mary in the Cebu town of Minglanilla, they take a long pause to identify which of the two unfinished paintings bear the images of St. Matthew and St. Mark.

Saints tend to look the same.

They recognize St. John and St. Luke because they are applying the finishing touches on their paintings. Also, St. John has an eagle on his shoulder and St. Luke has a winged ox.

These four paintings will be converted into huge mosaic panels to be installed on the walls of the altar of the Shrine.

Fr. Joselito Danao, head of the team of pastors of the Archdiocesan Shrine of the Immaculate Heart of Mary, says the Four Evangelists heavily mention Mother Mary in their Gospels, which is why they decided to have them as subjects of the art mosaic.

The blue and white Shrine has remnants of Gothic architecture. Its facade is lined with blue LED that when night comes, the sight of lighted church beholds the faithful.

A church is never done. Parts of it are expanded, repaired, demolished, reconfigured, repainted, beautified, or modernized by the priests assigned to it for a particular period.

The Archdiocesan Shrine of the Immaculate Heart of Mary has undergone changes since its original edifice was built in 1880, according to benjielayug.com.

Before it became white and blue, it was pink. Its altar has been redesigned a few times.

Soon, the walls of the altar will have a new look. When the mosaic panels are mounted, the walls will seem to glitter when viewed at certain angles.

April Escasiñas, a Cebu-based interior designer who got her degree from the University of San Carlos, gave Fr. Danao the idea of the mosaic art.

After the process was explained to him, Fr. Danao knew whom to tap to render his idea into reality.

He pitched his idea to two Cebu-based members of the Dibuho Kisame Crew.

Duterte and Famador said, We got you, Father.

They began working on the project in May 2021.

Fr. Danao was looking at Aug. 22, 2021, the Feast of the Immaculate Heart of Mary, to have the artwork mounted.

But he knows his plans don’t always go as scheduled, more so when working with artists. He knows this by heart from his experience with the Dibuho Kisame in 2019 when he was parish priest of Parish of Saints Peter and Paul in Bantayan.

Art-painting the ceiling of the Bantayan church took longer than scheduled and cost more than budgeted.

“You have to respect the mood of the artist,” Fr. Danao said.

He is pleased with what Duterte and Famador have finished so far and tells himself that deadlines can be moved.

Escasiñas likewise is realizing that she cannot match expectation and reality.

When Duterte and Famador complete the four paintings, Escasiñas will convert the paintings into photo images and apply Photoshop to get the color saturation and then email the photo files to the mosaic supplier in China.

The China supplier will then convert the pictures into the size of two meters by three and then create the grid.

The grid guides the supplier on the volume and sizes of the mosaic tiles. The mosaic will then be printed and placed on a flat surface with different sizes of cut mosaic glass on the side.

Another layer of sheet and adhesive will be added.

Escasiñas says the supplier will place the 1 x 1 centimeter glass mosaic, piece by piece, and cut on irregular size to conform to the form and shape of the figures on the picture.

It is a tedious process and therefore takes time.

That is why she set the 90-day timetable.

It is also expensive; per square foot costs P9,500.

Listening to the interior designer and the painter discuss their collaboration, Fr. Danao was confident of being able to render the artwork in mixed media -- oil painting, photography, mosaic.

He utters a prayer of thanks for the serendipitous discussion, loud enough for everyone in Famador’s small studio in Busay, Cebu City to hear.

Artwork does not come cheap. The mosaic art project of the Shrine costs P2.53 million.

For this “majestic project of art,” as it is described by the Shrine in its Facebook page, Fr. Danao needs to raise the money.

The team of pastors has committed personal money for the endeavor, Fr. Danao says. The project is a collaboration between the priests and the Parish Pastoral Council (PPC).

“Sacred art has become an important role in evangelization throughout the history of the church. It serves as a living picture of our faith,” the Facebook post of the Shrine says.

The team of pastors and the PPC are appealing to the “generous support and never fading love to our parish for the realization of this majestic project of Art.”

Donations may be coursed through: