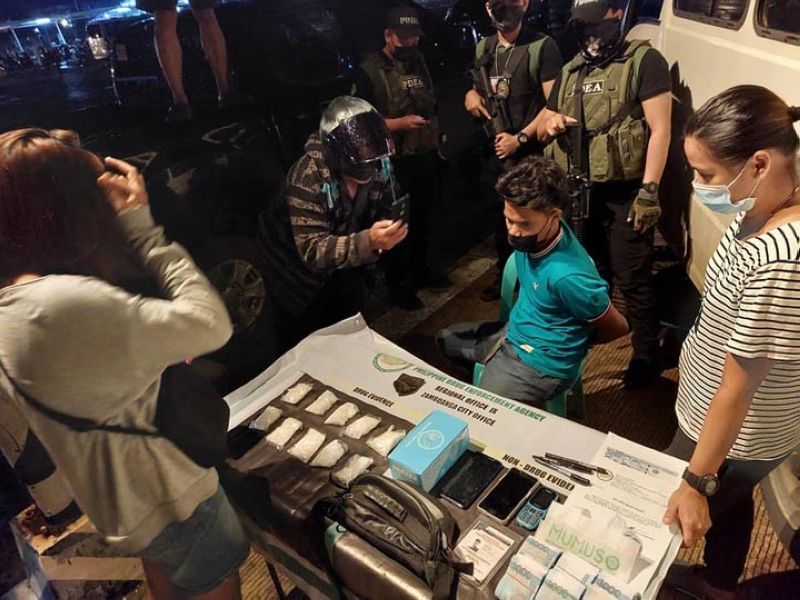 ZAMBOANGA. Operatives of the Philippine Drug Enforcement Agency (PDEA), together with policemen, arrested on July 18, 2021 an alleged big-time drug trader and seized P3.4 million worth of illegal drugs in an anti-drug operation. A photo handout shows the arrested suspect (seated) and the packs of shabu seized from him (SunStar Zamboanga)

OPERATIVES of the Philippine Drug Enforcement Agency (PDEA), together with policemen, have arrested an alleged big-time drug trader and seized P3.4 million worth of illegal drugs in an anti-drug operation.

Jury Rocamora, PDEA-Zamboanga City Office head, identified the arrested suspect as Benhar Mowa, an alleged member of a drug syndicate that operates in the region, Northern Mindanao and Cotabato areas.

Rocamora said Mowa was arrested in an anti-drug operation around 7:35 p.m. Sunday, July 18, at a parking lot of a shopping mall in Barangay Sta. Maria, Zamboanga City.

Seized from Mowa were 500 grams of shabu packed in 10 transparent heat-sealed plastic packs worth P3.5 million and concealed in a facemask box, two smartphones, one analog phone, an identification card, a sling bag, and an ecobag.

Rocamora said Mowa's cohorts, a policeman, did not show up during the buy-bust operation.

The policeman, who is assigned with the Zamboanga Sibugay Provincial Mobile Force Company, escaped in an anti-drug operation on June 7 in Cawit village, Zamboanga City.

The July 7 anti-drug operation in Cawit resulted in the arrest of two suspects and confiscation of a kilo of shabu worth P6.8 million.

Rocamora said the suspect's group get their supply of illegal drugs from the province of Sulu. (SunStar Zamboanga)