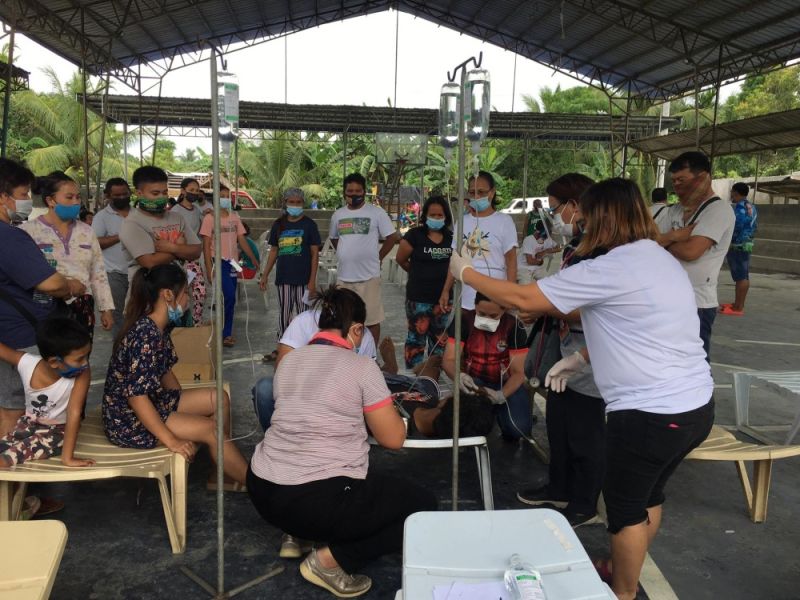 THREE residents affected by the diarrhea outbreak in Barangay Tulalian in Sto. Tomas, Davao del Norte tested positive for coronavirus, while two fatalities have been added to the record, reaching the total deaths to three.

In information provided by the Sto. Tomas Municipal government on Tuesday morning, July 20, the three were among the 99 patients subjected to reverse transcription polymerase chain reaction (RT-PCR) test.

The swabbing came after health officials suspected that some of the diarrhea patients were infected with Sars-CoV-2, the virus causing Covid-19, after they did not manifest dehydration.

Municipal Information Officer Mart Sambalud said that one patient, a 20-year-old male, is symptomatic, while the remaining two are asymptomatic. All of them are in strict isolation.

The swab results were released on Tuesday, July 20.

Sambalud said the Municipal Health Office (MHO) also conducted a random rectal swabbing to 17 patients who fell ill with the water-borne disease, of whom eight were found to be cholera positive.

Earlier, stool tests of patients showed they suffered acute diarrhea secondary to amoebiasis, a water-borne ailment. Most of the patients who were admitted to various private and public hospitals were severely dehydrated and had been responding well to treatment.

The two patients died on Tuesday afternoon, July 20, after losing too much body fluids due to diarrhea.

The 81-year-old patient was admitted last July 16 at Carmen District Hospital and expired around 10 a.m. Tuesday, while the 68-year-old patient, in hypovolemic shock (severe body fluid loss), was rushed to the makeshift treatment facility at Barangay Tulalian Covered Court.

The patient also expired despite several attempts by health personnel to revive her.

The bodies of the fatalities were subjected to postmortem swab specimens for Sars-CoV-2 testing.

The Provincial Health Office (PHO) of Davao del Norte recommended that the patients be subjected to RT-PCR test to rule out “Covid-19 diarrhea.”

MHO Administrator Charlemagne Fernandez said the local government is currently determining the cause of the outbreak.

However, the Environment Sanitation Report from the MHO revealed that the water system source in the area is possibly contaminated due to poor chlorine disinfection. The finding was based on the ocular inspection conducted by the Sanitation Team and random interviews with the Tulalian Water Association (Tuwasa) personnel.

Fernandez, however, said the result of the initial probe is not yet conclusive as the official result of the microbiological water analysis is expected to be released this week.

Evangelista has ordered the MHO to ramp up the chlorination efforts in the affected households.

Lapiña said that while waiting for the laboratory results of the water sampling, the barangay’s water source was temporarily closed.