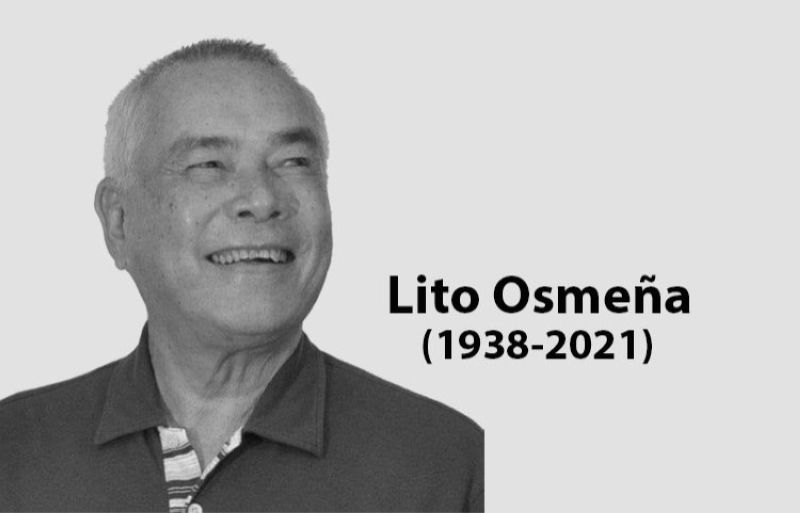 [1] CEBOOM, 'AN ISLAND IN THE PACIFIC': Former Cebu governor Emilio Mario "Lito" Osmeña Jr., who died Monday, July 19, is credited as the architect of Cebu's progress in the early nineties. He didn't claim the title although in his failed campaigns for president and vice president, successively, his propagandists exploited the word "Ceboom." Forever Ceboom would evoke the name Lito Osmeña.

Ceboom, coined by mixing "Cebu" and "boom" and obviously inspired by the 1954 doo-wop song "Sh-Boom (Life Could Be A Dream)" by The Chords. Sh-Boom conjured the hissing sound before an explosion. Ceboom inevitably reminds us of the brilliant and bold moves taken by then governor Lito during his 1988 to 1992 term, which saw the island's economic growth sprinting ahead of the national pace.

Such as: building the trans-central highway Cebu City to northwest Cebu, selling province-owned lots that became the Cebu Business Park and spawned other commercial hubs, and various other aggressive and visionary decisions.

With Ceboom was the marketing of Cebu as "an island in the Pacific," to set it apart from the mess of an image the country was in the aftermath of the martial law regime.

[2] MORE OF A BUSINESSMAN THAN POLITICO. Lito Osmeña was described as "a Cebuano first, a businessman second, and a politician third." Often he refused invitations to political or social functions in the towns, saying it was not his job. His affinity to business resulted in a "no-nonsense, pro-business administration that reduced bureaucratic intervention in business." His faith in local autonomy was shown in his trust in each town mayor and councilors doing their job even if left alone by the provincial government. He once said, "Capitol can shut down for months and the towns will still be operating."

It must have been a mix of aggressive business acumen and imagination of a visionary that resulted in the so-called Ceboom gains.

He told this writer in a 2012 SunStar interview: "I prioritized what I called the four pillars for progress: Power, water, transportation and communication were laid in Cebu ahead of the rest of the country." He got the money by "sourcing revenues from thinking out of the box such as the first and only successful municipal bond issue partnering government with the private sector." Resorting to "equity of the market" financed the infrastructures needed to push Cebu's economy.

[3] 'IMPERIAL MANILA" AND CEBUANO LANGUAGE. Lito Osmeña was highly critical of centralized authority and made it a centerpriece of Promdi, the regional party he organized. If he didn't start the public slamming of "Imperial Manila," he must have encouraged it since he often complained in speeches and interviews about local governments being made subservient to decision makers in the capital region. He also pushed for Cebuano language, griping that the national language was being monopolized by Tagalog words and phrases.

That stance became awkward and problematic during his national campaigns for VP, then president, as he had to talk in Tagalog and hold his tongue about Manila's imperialism before Tagalong-speaking voters.

[4] 'MAGBUOT MO?' AND OTHER SOUND BITES. Other politicians said it too but it was Lito Osmeña who first said "Cebu City does not need a Chinatown as the city is one big Chinatown." It was a concession to the Chinese community's prevalence, even dominance, in many sectors of Cebu society. The comment was among few pronouncements from local politicians that got national attention.

Lito was once criticized for an unpopular decision he made. He publicly snapped back, "Magbuot mo?" People no longer remember the decision slammed; they remember only the dismissive retort that in effect says, none of your business, I wield the authority. Critics said he was being autocratic, "it must run in the family," etcetera.

[5] HADN'T SUED ANY JOURNALIST OR MEDIA OUTLET. One may not be sure about lawsuits, but Lito Osmeña was not above criticizing news workers. He was open in his disagreement with a news story or an opinion column, sometimes taking it up with Capitol reporters. But he didn't publicly call out to embarrass anyone. See if this can be an exception: He once told some guests at a SunStar function honoring the top news personality of the year, "You know, everyone in SunStar hates me, from the editor to the janitor. And yet they voted me their honoree."

[6] DIDN'T SCORE MANY ELECTION WINS. Lito Osmeña won and served as governor from 1988 to 1992. But when Lito ran for vice president in 1992, under his regional party Promdi, with Fidel Ramos under Lakas for president, he lost to Joseph "Erap" Estrada. His wife Annette Versoza-Osmeña also lost in her bid for governor to Vicente de la Serna. (Lito was appointed by then president Ramos in 1994 as chairman on flagship programs.) In the 1998 elections, he ran for president but lost, again to Erap Estrada. After that, more than once, he was rumored or himself announced he'd run for senator or congressman but didn't.

As one can see, Lito himself won only one election for himself and his family although he is known to have helped elect people he supported in political races.

Lito had been grooming his son Mariano "Mimo" Osmeña for mayor, governor, or city mayor (2011), vice mayor (2018), and congressional seat (2021). Last June 4, in a press-con with Mimo, Lito announced the idea of activating Promdi, along with his son's plan to run for a House seat, probably in Cebu City north. If he'd help fulfill his dad's long-running wish, Mimo might finally run in 2022.