Bankers to public: Check for forex updates in legit sites 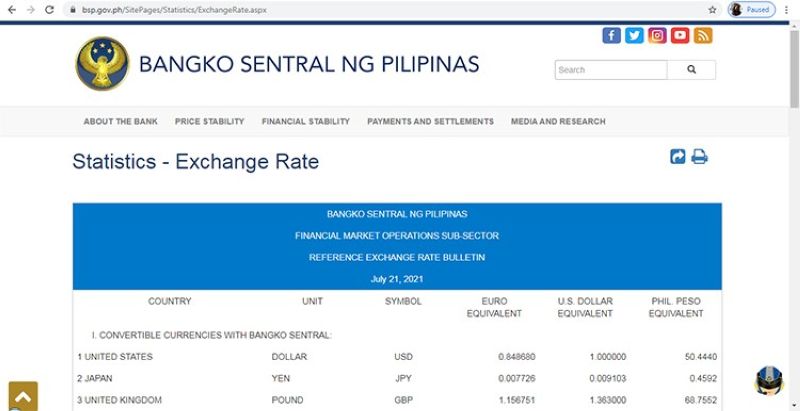 THE Cebu Bankers Club (CBC) has advised the public to refer to credible sites like the Bankers Association of the Philippines (BAP) and the Bangko Sentral ng Pilipinas (BSP) when looking for foreign exchange (forex) rates.

The bank executives issued the advice after a glitch in Google’s search results on Tuesday, July 21, 2021, showed that the Philippine peso seemed to have strengthened against the US dollar overnight.

“Usually banks would refer to BAP website at bap.org.ph. The rate was really not that low. The most possible situation that happened was that the point of reference to the rate was not updated on that website shown in Google search results compared to the official websites like the BAP website that is being used by financial institutions,” Michelle Co-Lin of CTBC Bank (Philippines) Corp., president of CBC, said.

Lin said there had been no instance that the appreciation of the peso was abrupt.

“God forbid it will happen. It would cause problems to the export sector and the overseas Filipino workers (OFWs),” she said.

Other legitimate sites like Bloomberg had the forex at the P50 level against the greenback.

“I checked with our rates this morning and (there were) no significant changes so far. Meaning there was no actual flash crash yesterday, only human error,” he said.

Dr. Alvin Ang, economics professor of the Ateneo de Manila University, in a recent summit, forecasted that the Philippine peso will remain at P50 to the $1 mark in the third quarter of this year but it might depreciate to P51 in the fourth quarter as OFWs start sending money.