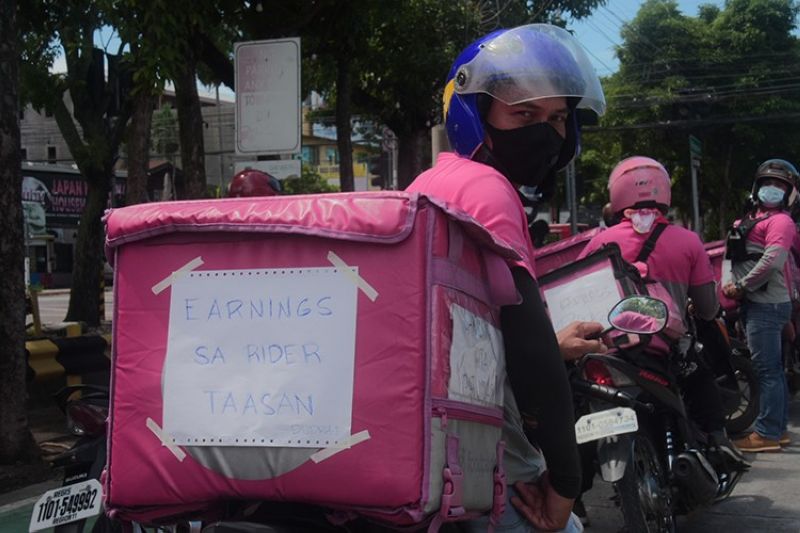 A DAVAO City councilor revealed that the management of Foodpanda allegedly rehired their suspended riders in exchange of information about the recent protest.

"Following the suspension, instead of properly engaging with the riders, Foodpanda instead launched a so-called whistleblower program, which offered the suspended riders their jobs back in return for information about the protest," Councilor Pamela Librado-Morata said in her privilege speech on Tuesday, July 21.

On Thursday, July 15, around 300 Foodpanda riders staged a protest on Roxas Avenue against their company.

Several riders of the food delivery service provider questioned the management's fee structure that resulted in the diminishing of their take-home pay.

In an interview with SunStar Davao, some riders disclosed that they were terminated after the management learned that many riders did not take their schedule for days, speculating that they were on a strike.

Librado-Morata, chairperson on labor and employment opportunities, said she had recently received a letter from the Davao United Delivery Riders Association Inc., asking for her help following the suspension of many Foodpanda riders.

Librado-Morata said the riders were protesting against the management due to "the sudden termination, wrong or unfair determination of salary, and their call for a higher wage" amid the ongoing crisis brought about by Covid-19.

"Unfortunately, those who made demands for pay transparency and the grant of health and accident insurance received a 10-year suspension and were offloaded from their respective mobile foodpanda apps," the councilor said in her speech.

The councilor called the 10-year suspension "unjust, unreasonable, and without regard to due process."

She said the riders have been negotiating with the management and have been seeking transparency on the payment scheme computation.

The riders also demanded that they will be granted benefits, including health and accidental insurance.

"It is clear that the Foodpanda management does not truly consider their delivery riders as 'partners,' for the company refuses to negotiate with the riders for the latter's welfare," Librado-Morata said.

As essential workers, the councilor said it is justifiable that the riders have the right to demand "transparency and decency" from the management.

The councilor admitted that the rider's status is "new and emerging class of workers" and that the Labor Code does not cover some aspects of their nature of work.

With this, she said a new legislation must be passed to address their concerns.

"What we have in mind and what these delivery riders aspire for are regulations regarding their pay, based on the distance or a fixed rate per kilometer," Librado-Morata.

"Secondly, it will be ideal to have a standard percentage for riders per delivery charged to customer/buyer and a certain percentage charged to resto owners or merchants under Foodpanda and other similar delivery apps," she added, suggesting giving 50 percent of the 30 percent delivery fee direct to the rider.

The councilor also called on the Department of Labor and Employment (Dole) to facilitate the riders’ concern and raise the matter to the national level.

SunStar Davao asked for Foodpanda's response on the councilor's statement, but they have not yet responded as of press time.

However, they said in a press release issued on Monday, July 19, that they confirmed offboarding its partner riders protesting its rider fee structure.

The food delivery firm said that it “made the difficult decision to offboard a small number of riders who have violated their agreement with Foodpanda by calling for disruptions that may affect the ‘wider ecosystem’,” referring to other riders, vendors and customers.

“Rider pay structure takes into account route and distance among other factors, allowing for a fair pay structure that is higher than other industries,” Foodpanda said, adding riders likewise enjoy benefits from its partnerships with other brands apart from their earnings.

It added, "Beyond earnings through completed orders, riders also enjoy benefits from our partnerships with other brands including discounts on fuel/mobile data, insurance at a significantly lower price for the same benefits, free merchandise, among others."

Davao United Delivery Riders President Edmund Carillo told SunStar in a press conference that the management's statement is not true, adding that other riding companies give larger shares to their riders.

He also said the riders shoulder the gas money for every trip, and they are willing to take longer routes to make the deliveries.

Carillo also said riders get deducted P280 automatically for their health insurance, but there is no transparency or guideline to claim this.

Instead, riders who met accidents on the road while delivering were left to deal with the injury without assistance from the company.

He said they will have a meeting with Dole officials on July 26 to personally relay their demands.

"Unta maminaw sa amoa kay mao lang man amo ginahangyo, ang patas-an amo earnings. Then ibalik nila amo access (We hope they will listen to our appeal, which is to increase our earning. Also, we want our access to the app back)," he said during the AFP-PNP Press conference.