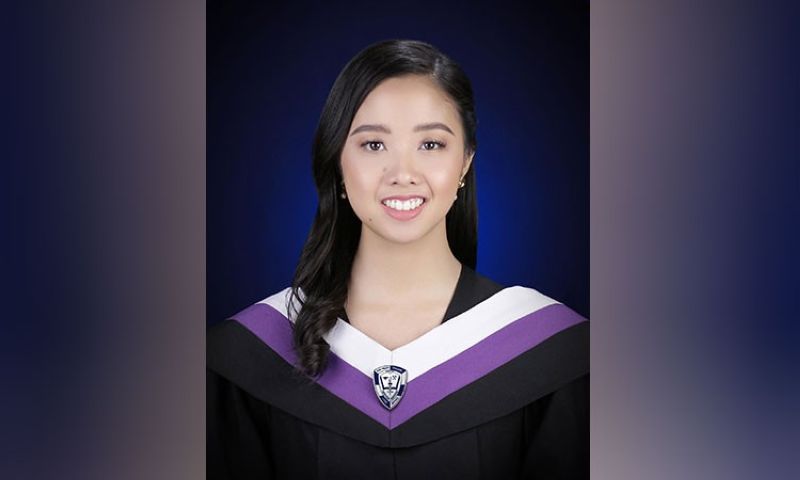 THE Covid-19 pandemic may have restricted everyone’s movement but this does not limit us from achieving our goals in life.

Pamela Eika Alfar Ng was swarmed with congratulatory messages online from friends and relatives the moment she went home from work. She got a 91.55 percent passing rate.

This was then Pamela, a graduate of San Pedro College (SPC) in Davao City, found out that she placed tenth in the Pharmacist Licensure Exam last June 2021.

SPC Dean of the College of Pharmacy Fatima May Tesoro said she is proud of Pamela and all the passers for pushing through with the exams despite challenges.

"After several delays and postponements, let alone the uncertainty if the June examination will push through, their spirits were still up for the boards. San Pedro College and the pharmacy department is immensely thankful to God for this accolade," Tesoro said.

Pamela admitted that it was not the news she was expecting. While she felt thankful for it, never in her wildest dreams she expected to snag the top 10.

The announcement of the result happened a week after they took the examination, which had been rescheduled many times due to the Covid-19 pandemic. The waiting was a nerve wracking moment for her as unlike the previous when in just two to three days results were out.

What's her secret? None, she admitted. In fact, there were doubts that she would pass the test as the lessons from her classes weren't that fresh from her memories anymore.

"It has already been two years since I graduated. Of course, there were doubts considering the lessons were not that fresh in my memory. Could I pass the test after two years, after many postponements? It’s already draining. But still, I am happy that I made it to the top 10,” Pamela said.

While she admitted that passing the licensure exam was all that matters, she said making her the sole Mindanawon in the list was a “bonus.”

It was not easy studying in the time of the pandemic. The current Covid-19 situation had affected the exam schedules. The postponements tested her motivation.

But her achievement at the time of the pandemic is definitely up for the books.

“I appreciated all the hard works. Now I believe that everything is possible,” she said.

After much delay, Pamela is now a full-fledged pharmacist, and ready to serve her community.

The next test she needs to pass is scouting for career opportunities at this time, with many livelihood lost and the growing number of unemployed graduates brought about by the current Covid-19 restrictions.

She knew that it would not be easy simply by passing the examination.

For now, she utilizes her time in her family’s dental-related business. This was her sideline while still reviewing for her exams.

But why did she take up pharmacy as her career choice in the first place? Pamela said, “It wasn’t part of my choices in mind.” In fact, she never had a dream course back when she was young.

With her parents being on the medical side of business, she then went for it.

"From the start, I planned to take up pharmacy as a pre-med course, as I planned to pursue medicine," she said.

But when she reached second year college, she was firm in finishing the course.

What made her decide to stay? Pamela said she envisioned putting up her own pharmacy. Not as a business-oriented purpose, but more of giving back to the community.

“I wanted to open my own pharmacy that serves our indigent and disadvantaged members of the society,” she said, revealing that it was her father who inspired her.

“Whenever my father buys maintenance medicine for my mom, he sees other customers who can’t afford to buy their prescribed meds. I even saw some Facebook posts of other customers shouldering other people’s medicine bills,” she added.

The pandemic struggle also made her realize that medicine is a basic commodity, and that it should be accessible to everyone, especially those in the marginalized sector. She added that it is a basic human right that must be given at an affordable price.

“Hopefully within five to 10 years, I can achieve this goal of mine,” Pamela said.

If there is also one thing she wanted her story to be remembered, it’s that pharmacy is not just a mere job of memorizing medicines, and which one will serve the purpose.

“In our perspective, when we go to the pharmacy we just purchase meds, but I realize that it is a practice that the people should see,” Pamela said, adding that pharmacists play a vital role in ensuring that the medicines that the patients buy are apt and safe for them.

And yet, pharmacists are less appreciated in the eyes of the public in the medical field.

“I hope people will realize that in the medical field it is not just for the money, but the passion and willingness to serve them,” Pamela said.