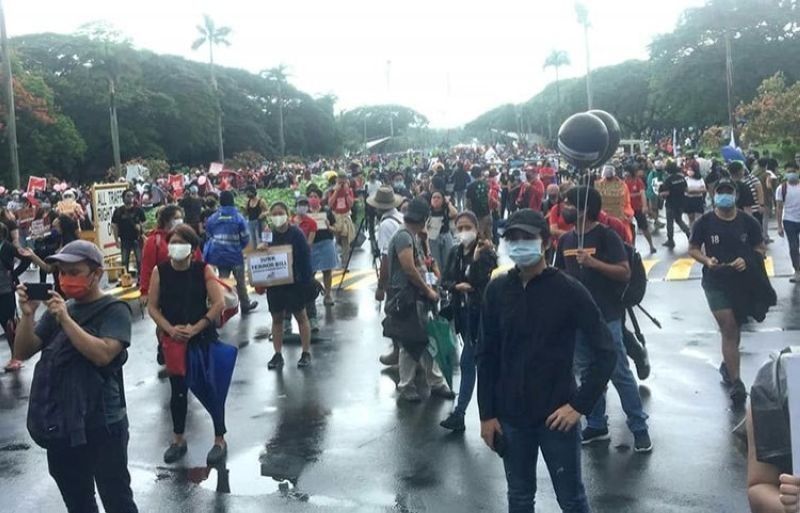 MANILA. In this photo taken in June 2020, protesters observe physical distancing and wear face masks as they converge inside the UP Diliman campus. (File)

PHILIPPINE National Police (PNP) Chief Guillermo Eleazar said the Quezon City Government has issued a permit for the conduct of pickets during the final State of the Nation Address (Sona) of President Rodrigo Duterte on Monday, July 26, 2021.

Eleazar said the protests were allowed on the following conditions: protesters will follow minimum health protocols such as wearing of face mask and face shields, and observing physical distancing; they must stay only in allowed areas; and no children and senior citizens will be allowed to join the program.

Eleazar said the protesters will gather at around 9 a.m. in three areas: at the University of the Philippines (UP) compound, in front of the Commission on Human Rights office, and in front of the National Housing Authority at the Quezon City Circle.

They will then do a unity march along Commonwealth Avenue toward St. Peter Chapel for the culmination of the event.

“What we have to do is to check or monitor kung sinusunod nila ang mga napag-usapan,” said Eleazar.

In a virtual press conference on Saturday, Bagong Alyansang Makabayan (Bayan) spokesperson Teddy Casiño said they will police their ranks to prevent the spread of coronavirus disease 2019 (Covid-19).

Among the groups that said they will join Monday’s pickets are Bayan, iDefend, Movement Against the Ati-Terrorism Act, Kabataan party-list, Sanlakas, Akbayan, Karapatan, Gabriella, Kilusang Mayo Uno, Piston, Kadamay, Agham, Sandugo, Save Our Schools Network, Anakbayan, League of Filipino Students, College Editors Guild of the Philippines, One Voice One Faith, Gabriela, Movement Against Tyranny, and Concerned Artists of the Philippines.

Eleazar said they have yet to monitor any security threat.

The PNP has enforced a gun ban from July 21 to 28 in Metro Manila.

Eleazar said only members of the PNP and Armed Forces of the Philippines (AFP) who are performing official duties and in agency-prescribed uniform will be allowed to carry firearms outside residence during the said period.

A total of 15,000 police personnel will be deployed to maintain peace and order in Quezon City.

“I have directed all police district directors to strengthen anti-criminality measures and police visibility operations all over Metro Manila,” said Eleazar.

“As usual, our police will exercise maximum tolerance but at the same time we are appealing to the militant groups to do their share and police their ranks to ensure a peaceful and orderly Sona. Of course, our police are always alert and would not hesitate to use legal force if the protesters become unruly,” he added. (SunStar Philippines)