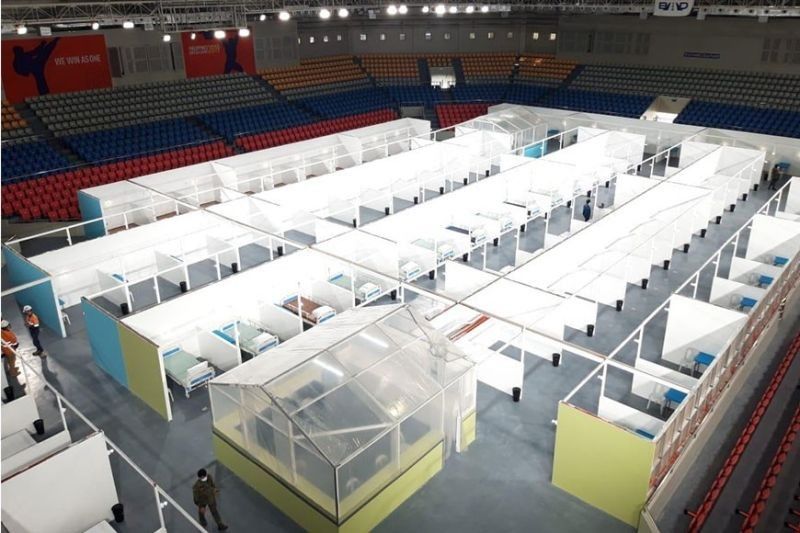 MANILA. The Ninoy Aquino Stadium at the Rizal Memorial Sports Complex was converted into a quarantine facility for mild cases of coronavirus disease (Covid-19). (File)

He said the government has already released P660 billion. The alleged underspending involves only P6 billion, or one percent of the P660 billion funds released, he added.

“Now, we, the Department of Budget (and Management) and ourselves, are going to each department to see where the P6 billion is. But, Mr. President, this is one percent problem. This is not...In relation to what we have released, P660 billion, this is one percent, okay, and we are sure that it will be released. But in the meantime, we are asking each department to really push the spend, to really spend the money,” he said.

Dominguez was referring to funds that have yet to be released.

A mid-year report released by Malacañang Sunday, July 25, 2021, showed that the Department of Budget and Management (DBM) has released a total of P665.72 billion under the Bayanihan laws.

Of the total, P387.17 billion was released under Bayanihan to Heal as One Act (Bayanihan I), which has already expired and should have all been spent. Implementing agencies reported that they obligated P360.42 billion (93.09 percent) and disbursed P342.4 billion (95 percent).

More than P17 billion was unobligated while P46.39 billion of the obligated funds was not spent. Compared with the P205.12 billion allotment, funds amounting to P63.67 billion have not been spent.

The Bayanihan laws provide the funds for the projects and programs aimed at responding to the Covid-19 epidemic in the country.

Among these is the social amelioration program (SAP), which distributed cash assistance to low-income families affected by the pandemic-driven lockdowns.

Aside from the Bayanihan laws, the government also strengthened the country’s healthcare system capacity.

From one Covid-19 testing laboratory at the Research Institute for Tropical Medicine (RITM) in January 2020, there are now 273 laboratories that are authorized to conduct reverse transcription polymerase chain reaction (RT-PCR) tests to detect Sars-CoV-2.

The government have also beefed up contact tracing capacity. As of June 2021, the Department of the Interior and Local Government said the country had 119,246 contact tracers. The ideal number of contact tracers is more than 135,000 to meet the ideal ratio of 1 to 800 persons.

These contact tracers have since traced and assessed 87 percent of close contacts and isolated 82 percent of suspected/probable cases within 24 hours, the Malacañang report said.

The government also came up with StaySafe App, a digital contact tracing platform that is being used by over 5.3 million people and in 65,970 establishments and organizations nationwide.

To provide additional beds for Covid-19 patients, the Department of Public Works and Highways has built additional treatment facilities.

There are a total of 9,392 temporary treatment and monitoring facilities (TTMFs) and 22 mega facilities with a combined capacity of 135,452 beds.

The government rolled out on March 1, 2021 a massive vaccination program against Covid-19.

The government aims to inoculate 77,746,906 Filipinos, or 70 percent of the total population, in order to achieve herd immunity against Covid-19 by the end of the year. (Third Anne Peralta-Malonzo / SunStar Philippines)