IPs in Haran return to Talaingod 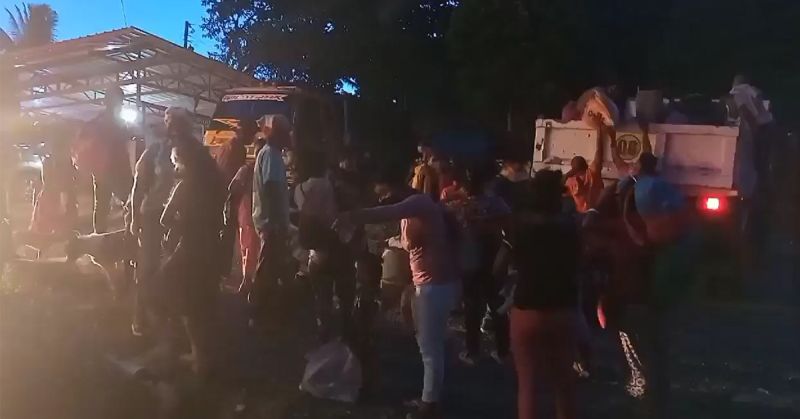 A TOTAL of 53 Ata Manobo tribe folk, including 30 minors, have returned to their ancestral land in Talaingod, Davao del Norte after three years of living at the United Church of Christ in the Philippines (UCCP)-Haran in Davao City.

Mandacawan said they stayed at the UCCP-Haran for more than three years after her nephew was allegedly murdered by an Alamara member in 2017 and they were being threatened with the so-called “Pangayaw.”

She said they decided to leave and go back to Talaingod after their tribal leader, Datu Doloman, left them at the UCCP-Haran, which made their life difficult inside Haran’s premises.

The escorting police personnel together with the IPs arrived at the house of Bae Pilar A. Libayao, Indigenous Peoples Mandatory Representative (IPMR) of Talaingod, om Sitio JBL, Barangay Sto. Niño around 4:30 p.m. on the same date who then accompanied them to the Municipal Tribal Hall where they were temporarily sheltered.

PRO-Davao Region Director Brigadier General Filmore Escobal said he hopes that their return to their homeland will "finally end the deception and exploitation of the people and organizations which have been using the IPs to get funding from local/foreign donors, wherein the funds being collected are utilized to support communist activities."

(Pasaka-SMR is spreading propaganda that the voluntary departure of IPs from Haran was to continue their struggle for their welfare. The truth is, the hardship experienced by IPs inside Haran is the real reason and the stories that reached them that the government programs and services have already benefited their fellows.)

Pasaka had previously denied the allegations, saying that it is a "continuing harassment from the state forces."

"The state has made countless attempts to pin us as 'terrorists' and even victims of trafficking, to distort the fact that we have chosen by our own will to evacuate and campaign in assertion of our just demands," Pasaka said in a statement on Sunday afternoon, July 25.

The six respondents have been charged with two counts of violation of Republic Act 7610 or the Special Protection of Children Against Child Abuse, Exploitation, and Discrimination Act or the Anti-Child Abuse Law.

The issuance of the warrant came nearly a month since the Anti-Money Laundering Council (AMLC) issued a freeze order on the bank deposits and assets of UCCP after it was allegedly used to finance or support terrorism.

The freeze order stemmed from the AMLC’s investigation that the assets are used to finance terrorism in violation of Republic Act 10168, otherwise known as The Terrorism Financing Prevention and Suppression Act.