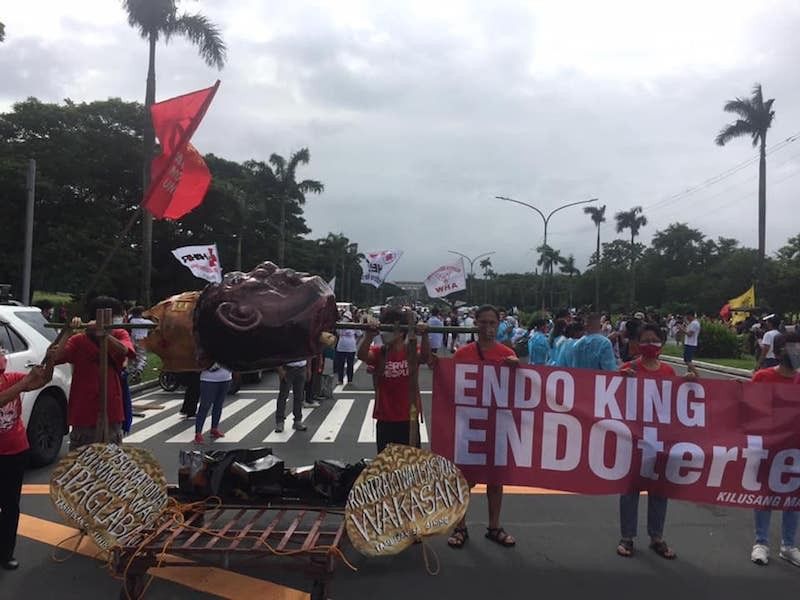 MANILA. An effigy of President Rodrigo Duterte is skewered like a roasted pig during a protest action on July 26, 2021. (Third Anne Peralta-Malonzo)

DESPITE the inclement weather, protesters gathered at the University of the Philippines (UP) Diliman campus in Quezon City several hours before the final State of the Nation Address (Sona) of President Rodrigo Duterte on Monday, July 26, 2021.

In a statement, the Alliance of Health Workers (AHW) said they joined the protest to convey to the public the “concrete and true state” of the health workers as frontliners in the fight against coronavirus disease 2019 (Covid-19).

“The increasing number of Covid-19 cases in the country is a reflection of the competence and inefficiency of the Duterte Government,” AHW national president Robert Mendoza said.

“Thus, we are giving him a score of ‘F’ of ‘Fail.’ It has been more than a year of pandemic and yet he has no clear, concrete comprehensive plan on how to end this crisis. His Covid-19 response is nothing but a failure,” he added.

Mendoza said the wages of health workers remain low. He also alleged that their benefits are being “withheld.” He did not give details.

Labor group Kilusang Mayo Uno criticized the Duterte administration for failing to end contractualization as promised by the President during the 2016 campaign period. It added that workers’ wages were “greatly depressed.”

They called for legislation to end contractualization, provision of pandemic-time economical aid and the institutionalization of a national minimum wage to put a stop to wage disparity.

He was referring to the killing of their members identified as Manny Asuncion, Carlito Badion and Dandy Miguel. They were among the nine activists who were killed after allegedly resisting arrest during the simultaneous service of search warrants by the police in the Calabarzon region on March 7, 2021.

The KMU said in the past five years of the Duterte administration, 56 workers have been killed while 30 others have been locked up in jail and slapped with trumped up charges.

Human rights watchdog Karapatan said there have been 414 victims of extrajudicial killings since Duterte stepped into power, excluding those who had been killed in the administration's drug war, which according to government data is around 7,000.

It also reported that 469,025 individuals were forcibly evacuated from their homes due to militarization, as well as 713 political prisoners under the current regime.

Police forces, fire trucks and ambulances were positioned along Commonwealth Avenue as protesters from UP, those in front of the Commission on Human Rights office and the National Housing Authority at the Quezon City Circle were expected to conduct a unity march toward the St. Peter Chapel for the culmination of their protest action.

PNP Chief Guillermo Eleazar, who inspected the policemen deployed in the area, reminded the cops to exercise maximum tolerance.

He commended the protesters for observing health protocols such as wearing of face masks and face shields, and maintaining physical distancing. (SunStar Philippines)