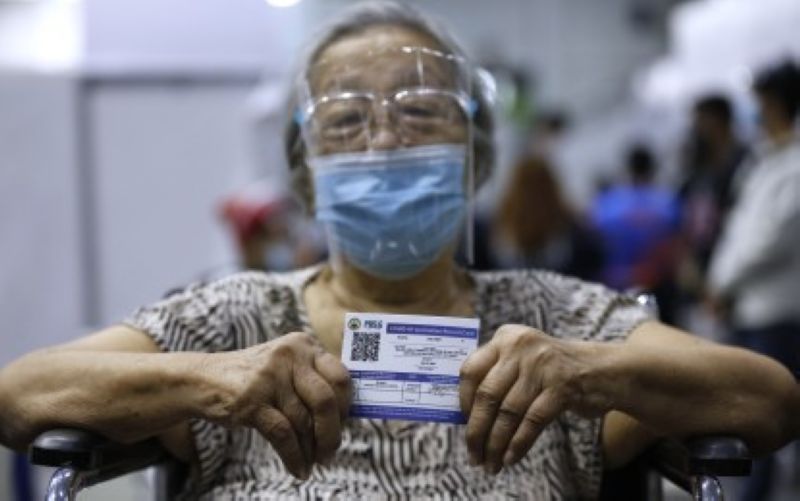 PROTECTED. A senior citizen from Pasig City shows her vaccination card after getting inoculated with the single-shot Janssen vaccine. Persons who use fake vaccination cards face charges of falsification of documents, the Baguio City government warned. (PNA photo by Joey Razon)

BAGUIO CITY – Persons who use fake coronavirus vaccination cards to avoid undergoing testing or to avail themselves of benefits face charges of falsification of documents, the city government warned.

Aileen Refuerzo, chief of the city's Public Information Office on Monday said the city government is ready to file charges against persons who will use unauthorized Covid-19 vaccination cards in any transactions, including gaining entry to the city.

"The city's triage is equipped to determine the authenticity of vaccination cards by double-checking the QR (quick response) codes and validating the hotline numbers indicated in the cards," she said.

In gaining entry to the city, only fully vaccinated individuals are exempted from presenting a negative swab test or from being subjected to an antigen test upon arrival.

Holders of cards that cannot be validated would have to undergo testing.

"Those with obviously faked cards will be charged accordingly," Refuerzo said.

Persons found using fake documents will be charged for falsification of documents under the revised penal code.

As part of the city's health protocol, all non-Baguio residents, including tourists entering the city, are led to the central triage at the Baguio Convention Center from the border checkpoint for verification of the document or to have an antigen test.