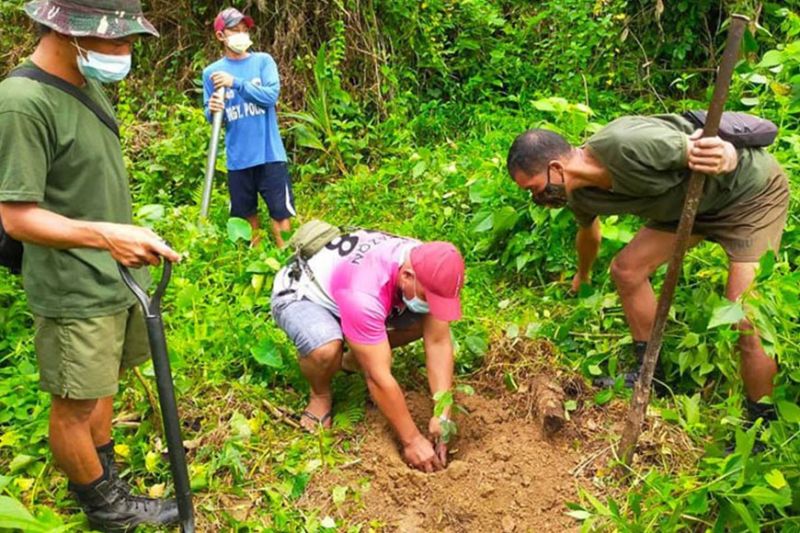 ZAMBOANGA. Sixty-five Narra seedlings were planted on Friday, July 23, at Sitio Kabanbanan in Makiang village, Siocon, Zamboanga del Norte. A photo handout shows soldiers and policemen plant a Narra seedling during the tree planting activity, which is in line with the observance of the 26th Police Community Relations Month. (SunStar Zamboanga)

The tree planting activity, which was initiated by the Siocon Municipal Police Station on Friday, July 23, was held in connection to the observance of the 26th Police Community Relations (PCR) Month.

The Wolfpack Company said in a statement Monday, July 26, that they participated to express their commitment toward preservation and environmental protection, as the activity aims to fight against climate change, helping the community to protect and conserve the natural resources.

"It also shows the true sign of the Bayanihan spirit and camaraderie among the people as we help hand in hand in preserving the environment," it said.

The 42IB said in a statement that its troops continuously support its counterparts and stakeholders in their activities as they share a common goal toward a better community.

"The Tagapagtanggol troopers take responsibility for making a difference in contributing to nature because we believe that a simple act can make significant changes to a better community," the 42IB said in a statement. (SunStar Zamboanga)