'Fighting my own government,' Duterte says on his drug war 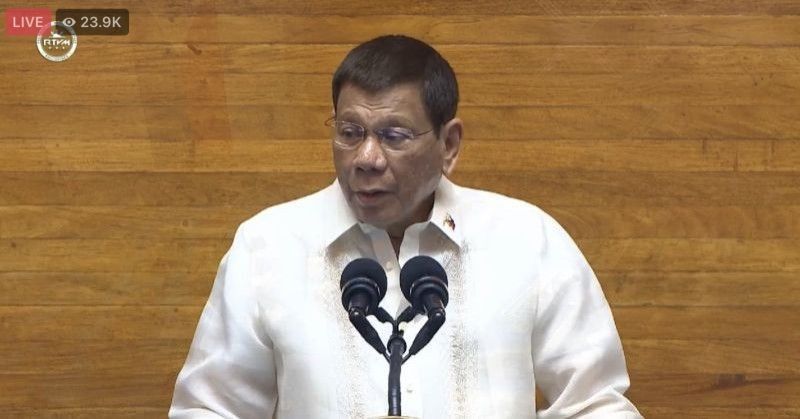 WHEN he said back in 2016 that he would eradicate the illegal drug trade in six months, President Rodrigo Duterte said he thought the fight would be no different from the one he waged in his hometown Davao City.

“You can either coerce, intimidate or bribe them, or give them money and say, ‘Lumabas kayo ng Davao, doon kayo magkalat sa Luzon at sa ibang lugar (Get out of Davao, lay waste to Luzon and other places),’” Duterte recalled during his final State of the Nation Address (Sona) on Monday, July 26, 2021.

Little did he know that he would be “fighting (his) own government” as nine police generals were involved in the illegal trade, he said.

“Because we are fighting a drug war that was being participated in the business by nine generals of the PNP, I did not know that I was fighting my own government,” Duterte said.

They all denied involvement in illegal drugs.

The President’s discussion on the police and military, including his plan to push for more benefits, caught the attention of Acting Cebu City Mayor Michael Rama, who was unable to finish the Sona as he had other meetings to attend to.

In 2016, Rama was included in the President’s narco-list, but three years later his name was not mentioned when Duterte revealed the “validated list” of 43 politicians allegedly linked to illegal drugs.

Duterte mentioned in his Sona the need for the local government units to hasten the Covid-19 vaccination.

The business leaders also listened to the President’s last Sona, and they agreed that existing laws passed during the Duterte administration like Republic Act (RA) 11032 (Ease of Doing Business and Efficient Government Service Delivery Act of 2018) helped the businesses. But the micro, small and medium entrepreneurs (MSMEs) remain wary of the proposed amendments to laws regarding foreign ownership.

Duterte urged the Congress to prioritize the bills for the amendments of the Foreign Investments Act, Public Service Act and Retail Trade Liberalization Act. If these laws would be amended this would open the country to more foreign investment and ownership.

Filipino Cebuano Business Club chairman Rey Calooy said the move has many pros and cons. He urged the strengthening of the existing laws like RA 11032 because approving the amendments would potentially put MSMEs at a disadvantage in terms of capitalization.