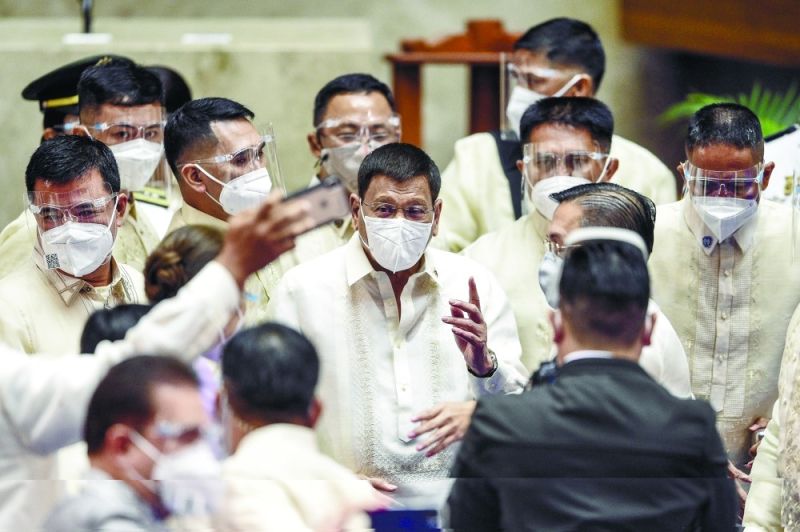 FINAL SONA. President Rodrigo Duterte is surrounded by security after he delivered his final State of the Nation Address at the House of Representatives in Quezon City on Monday, July 26, 2021. / POOL VIA AP

LEADERS of business organizations in Cebu lauded the Ease of Doing Business law and other laws enacted during the Duterte administration, but said the government should focus more on bringing down the cost of doing business and undertaking concrete measures to boost tourism.

Cebu Chamber of Commerce and Industry (CCCI) president Felix Taguiam said they welcome President Rodrigo Duterte’s commitment “to assist the private sector (in) reclaiming the commercial vibrance of the country prior to the pandemic.”

He said the chamber has partnered with the national government in the implementation of interventions for the small, medium and micro enterprises such as the Kapatid Mentor ME and the Digital Services Entrepreneurs Advancement Mentoring Program.

“Still remaining a challenge and struggle are those that increase the cost of doing business such as power,” Taguiam said.

The CCCI president said the utilities sector plays a vital role in economic and social development. But the cost and supply have been a challenge.

“The government should put more focus on the development of these areas that make our country and our cities a much better place to live in,” he said.

Mandaue Chamber of Commerce and Industry president Steven Yu, for his part, said all of the programs that Duterte discussed during his last State of the Nation Address will put the country “on a solid footing toward progress and recovery from Covid-19.”

“For Cebu, the tourism and domestic service industry needs a roadmap on how it can be supported due to the prolonged crisis. If we go around, there are many closures of businesses related to tourism and social entertainment which need rebooting and revival,” Yu said.

Calooy said these proposed measures would put MSMEs at a disadvantage.

He said the government should instead strengthen existing laws like the Ease of Doing Business Act.

The three bills seek to relax restrictions on foreign investments, which will help generate more jobs and accelerate economic recovery.

“The Philippines has a very good labor (force). With these reforms, we can benefit from world-class capital, technology, and innovation. The amendments to the Public Service Act will usher in a possibility that we have far better options for telecommunications and transportation. These two are very important to the lives of the ordinary people,” said Socioeconomic Planning Secretary Karl Kendrick Chua.

The amendments to the Retail Trade Liberalization Act will lower the requirements for foreign participation in the retail sector to facilitate greater competition, lower prices, and higher quality of goods to Filipino consumers.

Chua also highlighted the importance of the amendments to the Foreign Investment Act to also attract more foreign direct investments.

These bills complement the Corporate Recovery and Tax Incentives for Enterprises (Create) Act which brings the corporate tax rate in the Philippines closer to those in other Asean countries. (JOB)